Groupon's Indian website was recently brought down by onions. According to Al Jazeera America, the daily deals site offered a discount on onions, one of the country's most popular and important food items, in an attempt to gain consumer attention. But the price cut Groupon offered was so good that it resulted in a flood of traffic that temporally overloaded the company's servers, crashing the site.

Groupon was selling onions at a price of 9 rupees per kilogram, which equates to about 15 cents for 2.2 pounds worth. Al Jazeera says that onions have skyrocketed in price An onion frenzy sparked by a soured economyacross India recently, selling for as much as 100 rupees per kilogram. The news site reports that Groupon sold 3,000 kilograms, or about 6,613 pounds of onions, in 44 minutes. More than 8,000 kilograms were purchased by 17,065 users (who were restricted to buying 1 kilogram each) before Groupon sold out last week.

The whole debacle speaks not only to the demand for onions in India, but also the declining state of the economy in one of the world's most populated nation. Making matters worse, a number of nations around the globe — but not the US — are dealing with an onion shortage. The news site notes that the vegetable is an ingredient used in almost every meal there. Making matters worse, India has run into food supply shortages in recent months as the rupee has depreciated in value. The result has been dramatically inflated food costs. In the last two months, the onion has more than tripled in price, Al Jazeera says. 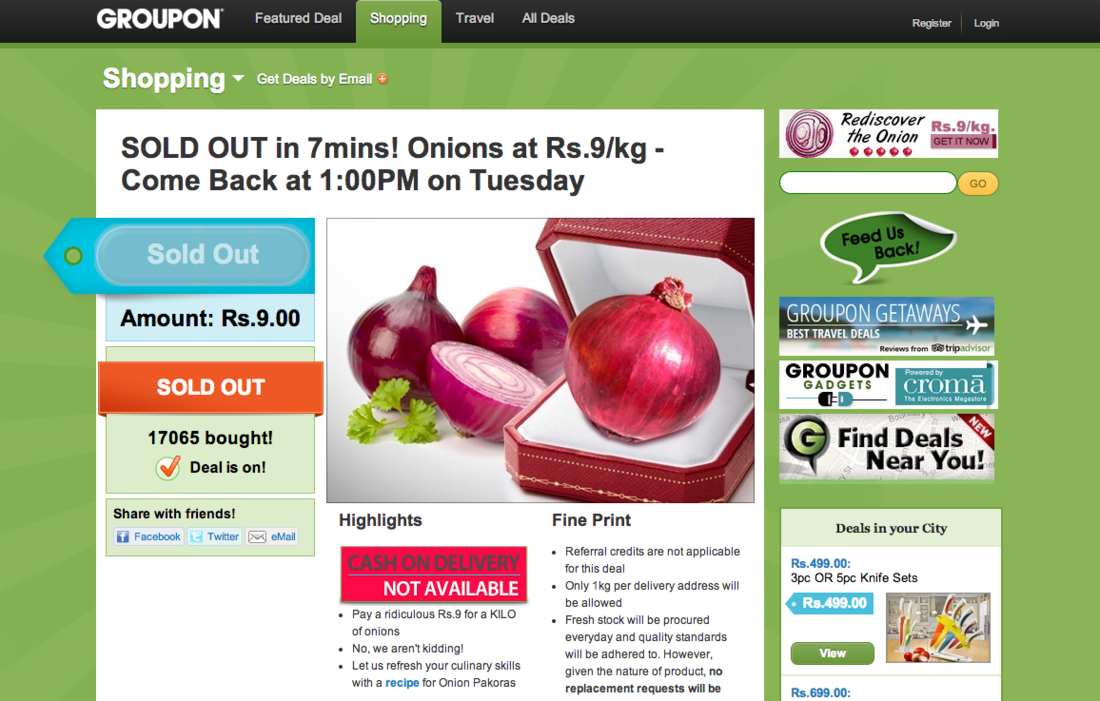 This economic reality isn't lost on Groupon. The site's listing for the discounted onions states somewhat sarcastically that "people haven't experienced onions in a long, long time," and that "this much-coveted, much-written-about, much-craved-for vegetable is now almost as expensive as caviar, diamonds, and Donald Trump's wig." Anur Warikoo, the CEO of Groupon in India, explains to Al Jazeera that onions haven't been priced at 9 rupees a kilogram since 1999. "We wanted to sell it at a price that most of us have completely forgotten," Warikoo says.