Tablets sound like a fantastic idea. Who wouldn't want to do all their work on a featherweight portable touchscreen, like the crew of the Starship Enterprise does day after day? Yet most of us who buy tablets find ourselves consuming media and playing addictive games. The performance hasn't been there to drive full desktop programs, not unless your tablet is as thick as the Microsoft Surface Pro.

But Intel might be about to make that both possible and affordable, with a new processor called Bay Trail. 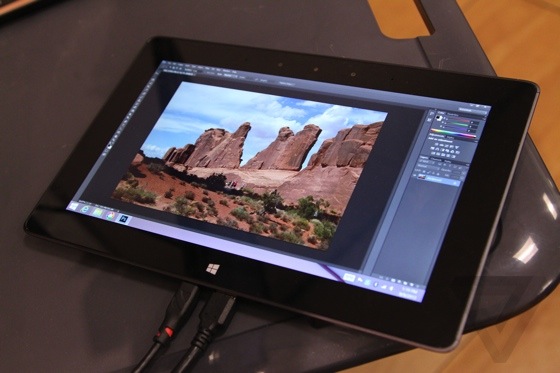 Last year there were three varieties of Windows tablets, and none of them quite hit the mark. Windows RT devices like the Surface RT had long battery life, but their ARM chips could be quite slow and wouldn't run traditional Windows desktop apps like Photoshop. The aforementioned Surface Pro and its ilk could run everything you threw at them thanks to their powerful laptop chips under the hood, but battery life was poor, the devices were chunky, and they required fans to cool them down. That brings us to the Intel's Atom devices, which tried to bridge the fjord. While they certainly made us question the value of Windows RT, the Atom chips still weren't good enough to smoothly run Windows 8 and traditional programs.

Intel aims to close the gap

With Bay Trail, Intel aims to truly close the gap. The company says the new 22nm Atom Z3000 "Bay Trail" processors will deliver up to twice the CPU performance and twice the GPU performance of previous Atom chips, and provide over 10 hours of battery life and three weeks of standby in a fanless tablet form factor. Intel claims prices will run as low as $199 for a Bay Trail tablet.

Remember when we told you how Intel's new Silvermont cores could power phones and tablets you might actually want? You'll find up to four of those cores in every piece of Bay Trail silicon. Mind you, even with the highest-end quad-core Intel Atom Z3770, Performance won't be on the level of Intel's new Haswell laptop / tablet processors, but we saw Bay Trail run full Adobe Photoshop, and even real PC games like Team Fortress 2. With previous Atom chips, that simply wasn't possible.

Hefty apps like those games still took a long while (well over a minute) to load on a Bay Trail prototype, but as long as the games are fairly basic (like Portal and Torchlight 2) they're moderately playable. That's because while previous Atom processors used the same PowerVR SGX graphics you might find in an iPhone, they now use the same Intel HD graphics as the company's desktop and laptop chips, with support for DirectX 11, OpenGL ES 3.0, and displays up to 2560 x 1600 resolution. Intel says we can expect to many of the first Bay Trail tablets ship with 1920 x 1200 displays. Those graphics also make for smooth video playback: we saw a 4K video running on a Bay Trail system with no noticible stutter.

Crucially, Bay Trail runs Android, too. Manufacturers can build a single tablet and sell it with either Windows or Android on board. Technically, Intel says you could potentially even dual-boot both operating systems and switch between them, but that would be up to tablet manufacturers to implement. And with those same Intel HD graphics, Bay Trail could blow other Android devices out of the water. We tried the Android version of Grand Theft Auto III at 2560 x 1440 resolution with maxed out settings, and it ran smooth as butter on the new Atom chip — to our eye, smoother than the Tegra 4 inside Nvidia's Shield gaming handheld. Bay Trail won't be your first choice for Windows gaming, but it's already impressive in mobile.

There's an awful lot going on under the hood of Bay Trail — see our slidedeck gallery above — but perhaps the most interesting part might have less to do with the CPU or GPU, and more the way they work in tandem with other components of the tablet silicon. Bay Trail dynamically allocates power between all four CPU cores, the graphics cores, a dedicated image signal processor for dual cameras, and even to connected displays. That means your tablet might not be as fast when you've got an external display connected, but on the flip side it means that when you need a little extra processing power it'll be diverted wherever it's needed.

It's also worth noting that Bay Trail technically isn't just for tablets. The rumors of Atom's death were exaggerated, it seems, but the architecture will indeed find its way into laptops and even bargain desktops under the Celeron and Pentium brands.

Now, we wait for the other shoe to drop: to find out how Bay Trail tablets will truly perform and how much they'll cost. So far we've spotted the Toshiba Encore, the Dell Venue 8 Pro, and the Asus Transformer Book T100, and the last is the only one with a price. Thankfully, it's relatively reasonable, bundling a 10-inch tablet and a detachable keyboard for $349. We'll also have to see if any app compatibility issues crop up. Still, from what we've seen of Bay Trail so far, it looks like Intel could potentially have a winning chip for Android tablets and a capable "good enough" solution for Windows.