Smarter than you think: the internet isn't dumbing us down after all

Smarter than you think: the internet isn't dumbing us down after all

A writer for publications including The New York Times and Wired, Clive Thompson is used to defending the latest trends in digital technology from naysayers and skeptics. In 2008, he was one of the first to describe how sites like Twitter were about more than sharing what you had for breakfast. Now he’s written his first book, Smarter Than You Think, an investigation of how technology is helping us to learn more and retain information longer. Clive took some time to talk with us about the new book, distraction, MOOCs, and how he uses technology with his kids.

So where did the inspiration for this book come from?

Open the weekend section in any major paper and you’ll find the same hackneyed opinion pieces about how technology is making us a dumber, shallower species. That gloomy view just didn’t accord to my reality. I’m 45, so I remember going to college before the interwebs existed and people were not measurably wiser, sitting around discussing Proust. They were watching Married With Children and playing video games. Idiocy is a long-standing feature of our species

"I wanted to predict the present."

I felt like, wow, everything in my life is richer and deeper thanks to new technologies. The opportunities for expression are so much greater. If you wanted the nutshell of what I was trying to do with the book, most tech books try and predict the future, which is incredibly easy, because you just say whatever the heck you think will be happening in 10 or 15 years, and nobody ever bothers to fact check that. I wanted to predict the present, if you strip off all the hackneyed op-ed pieces saying we’re becoming increasingly dumb and trivial.

And yet in the book, you discuss how difficult it was for you to focus for long periods of time without getting distracted.

Well, yes. That is the one major complaint about the effect of modern technology on everyday life that I wholeheartedly agree with. The distraction issue is real and significant, you can’t get certain types of important thinking and work done if you’re constantly darting around from one thing to another.

The problem is, we currently have this information ecology that has been designed to capture as much of your attention as possible. We think of our computers and smartphones as single devices, but really they’re a collection of services trying to capture our attention so they can show us ads. There hasn’t been much work trying to design our way out of that yet.

What was your solution?

In a way we know the design principles that lead us out of this mess. Back in the 1990s people like Mark Weiser and the guys at Xerox PARC were writing about ubiquitous computing. Their whole point was if you try and shove everything on one tiny screen, you will be distracted, because there’s far too much information on too small a surface.

Your 27-inch iMac screen seems huge when you first sit down in front of it. But imagine this was your entire desk, 27 inches across. This is the size of a cafeteria tray. There isn’t enough room here to spread out and think. When screens get as cheap and ubiquitous as paper, I imagine we will begin to spread them out, and to have each one dedicated to a different task or idea.

There are glimmers of how this might work. I used Scrivener to write the book, a word processing app that forces you into a full-screen mode without the constant drop-downs and notifications and distractions of a modern computer desktop.

So distraction aside, how is technology affecting our brains?

"No one in neuroscience has a damn clue."

I thought this book would lean heavily on neuroscience and I spent months researching it before deciding that, at this point, no one in that field has a damn clue. Anyone who says they do is selling you an over-speculative theory. If you begin with a cultural assumption you can always find some research to back it up. I personally believe that poetry is the pinnacle of writing and that our culture has gone downhill since we embraced prose as the dominant form. I’m the last person in North America that believes this, but that’s fine. So I went looking for a study on the difference in brain activity between reading poetry and prose. Lo and behold, there are some — and if you wanted you could interpret them to show [how] our minds have degraded, since we’re no longer dealing with rhythm and scansion and caesura and assonance. The novel destroyed our minds and I have the brain scans to prove it!

This book is about how technology is making us smarter. What do you make of a big theme from this past year, that technology and the web are disrupting education? 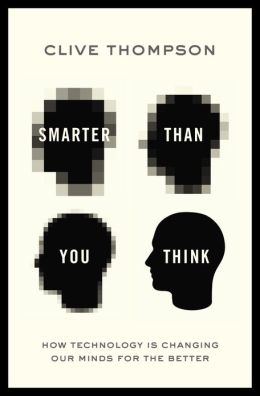 In this book I wanted to understand what works, not in the rich private schools that can afford a ton of technology, but in the schools that are the worst off. What I concluded was that technology can allow you to teach kids in remarkable new ways, but you should never use it to replace something you are already doing perfectly well with pencils, paper, and chalk. Often you go into schools and they have been suckered into buying 800 iPads and are now using those to teach painting. Why? You had a $3 finger-painting set that worked just great!

So what is it that these tools can do differently, that is unique to them? Well, one good example is allowing children to write for this incredible, global audience. When kids are writing a paper for a teacher, they sort of don’t care, because they know the teacher doesn’t care, they are being paid to read this, it's just an assignment and a grade. But as soon as you connect them with an authentic audience, the same way adults do on blogs and Twitter, the kids completely throw themselves into the work.

Once they saw their first comment from someone outside the classroom, their entire world shifted, because they understand they are thinking publicly, and that catalyzes them to produce something better. They go over their work and ask others to critique it before posting. Teachers who had struggled to get kids to write a two-page book report suddenly found they would willingly compose a painstakingly researched 35,000 word walk-through of their favorite video game.

Are you a fan of MOOCs and their ilk?

MOOCs are absolutely terrific for the people who already know what they want and just need to dig deeper. The meme out of Silicon Valley is that if we just give people access to the knowledge, we will unleash these incredible efficiencies and people will gobble up all the lessons themselves. But I don’t think that’s true for most people. I think that is because Silicon Valley is full of autodidacts, folks who taught themselves to code on their own. I would not have thrived in that situation. I’m pretty nerdy, but I still needed teachers to push me.

I don’t like that MOOCs are being sold, especially the for-profit ones like Udacity, as a replacement for college. The reason you go to college is to learn how to learn, and you still need teachers for that. The idea that MOOCs could replace higher education is, frankly, a bad idea. But, hey — I’m a Canadian, so I think the whole idea of for-profit education is stark raving mad.

How do you use technology with your own kids?

I want my kids to be learning by doing. Fortunately both they and I love videogames, and to me that’s a fantastic opportunity to teach them such really valuable stuff in a way that’s weird and fun. They are into Plants vs. Zombies, and using that you can get them to think in this very interesting way. When they get to a boss, I ask them to observe his behavior, postulate a theory about the rule set that defines his actions, and test a theory for how best to defeat him. This is the scientific method at work!