Twitter's first-party Android app has been steadily getting better over the years, but it has generally maintained the same look and feel, with four navigation tabs located at the top of your timeline. That's going to change drastically in the near future however, as a completely redesigned version of the app is now available to those that have signed up for beta testing.

The app is listed as version 5.0, and completely ditches the old tabbed layout for a sliding panel menu. It's still possible to swipe between columns for Home, Notifications, Messages, and your profile, but instead of only four columns, the app now has seven. The three new columns are dedicated to Activity, Trending, and finding new people to follow on the service.

The new column system is quite the departure from the old app, but what's even more drastically different is how the left-hand sliding pane appears. Twitter has made the panel translucent, with your profile header used as a blurred image behind the menu. It's very reminiscent of the album view in Rdio's mobile apps. You can jump to the seven different tabs directly from this menu, and each tab will show a number of unread messages there are on it if applicable. You can also reorder the tabs through this menu. 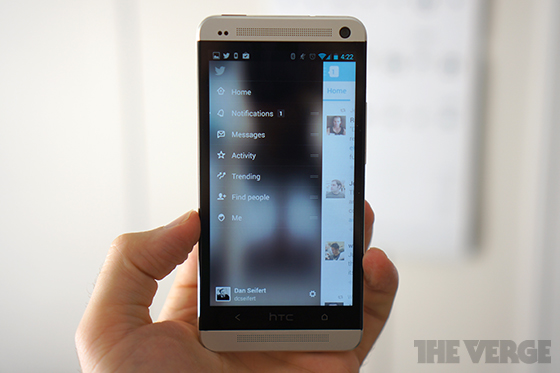 There are a number of other changes throughout the app, and it seems that Twitter has removed the ability to mark all of your direct messages as read. This is a beta, however, so features can change before the app reaches final release. Twitter did publish an article to its blog today explaining how it tests various experiments before releasing them to the general public. And yes, the blue lines are still present and accounted for.

We have reached out to Twitter for comment on the new app and will update this post if we hear back. If you want to jump in the action right now, you can sign up for Twitter's Android beta program to download it from the Google Play store.