Once, 4.3-inch phones were king

“Check out this screen, this thing is huge.”

It all started in 2011. Poor souls waiting in long Apple Store lines craned their necks to catch a glimpse of a big new phone that no one yet recognized. It was the Samsung Galaxy S II, with a bright and colorful 4.3-inch display that dwarfed the newly released iPhone 4S. Samsung’s message was simple: the next big thing is already here. And it kept on growing.

By the time Apple released the 4-inch iPhone 5, Android phones had effectively lapped it in the screen-size department. The popular Android phones, like the Galaxy S III, HTC One X, and Motorola Droid RAZR HD, were now closer to 5 inches. Samsung pushed things even further with the massively popular Galaxy Note lineup — even 5 inches got small quickly.

Yet at least for people I know, it's the smaller phones that everyone wants to try. The HTC One mini, the HTC First, and even the Galaxy S4 mini all get the same reaction: "it's the perfect size!" Yet it's constantly clear that no one buys these smaller, cheaper phones, which are typically just lesser versions of their larger counterparts. There's clearly a market for great, smaller phones (according to both my friends and to iPhone sales), yet no Android manufacturer has taken advantage. Even the Moto X, which feels remarkably small next to its competition, is a big phone. Flagship phones are growing and growing — will it ever stop?

All this brings me to Verizon's new $99 Droid Mini, the smallest and cheapest in Motorola's new lineup of devices. The 4.3-inch device fits in right next to its other miniature counterparts, but comes with less of a spec downgrade than some other devices we've seen. It has the same software and the same processor as the Moto X, and the Droid Maxx and Ultra. Maybe this time, making a phone smaller doesn't have to mean making it worse.

The rise of the BIG

Ever since the first iPhone, smartphones have looked pretty much the same: a rectangular slab dominated by a touch screen. The iPhone had a fantastic interface and great apps, but you were locked into a 3.5-inch (and later 4-inch) display. Through pure marketing muscle and the Galaxy S II, Samsung started a spec war, and other manufacturers quickly took up arms.

Phones with larger screens became the must-have devices, and smaller phones were sold as their lower-end counterparts. But manufacturers always want to hit every conceivable demographic, so smaller phones like the Droid Mini are still released, though they’re more of a concession than a statement. Sure, you can buy the Droid Mini phone, but you're constantly encouraged to spend a little more money to stay up to date with the newest technology — look how long the Maxx's battery lasts for only $200 more!

Samsung started a spec war, and other manufacturers quickly took up arms

Avi Greengart, research director for consumer devices at Current Analysis, told me he sees the screen-size race as being about standing out in the crowd. Android devices compete more against each other than the iPhone, and larger screens are an eye-catchingly obvious way to differentiate. It’s harder to sell a smaller phone like the Droid Mini, because it just doesn’t look like a flagship phone — not when it’s on a shelf next to devices that are so much larger and brighter.

Not that Motorola does the Mini any favors to begin with. It's made of a smooth, slimy, unpleasant black plastic similar to the Ultra, a far cry from the comfortable, solid Moto X. There’s a rough Motorola logo etched into the back of the phone in the exact place where I rest my index finger. It’s uncomfortable yet I couldn’t stop touching it, like a pimple that wouldn’t go away. 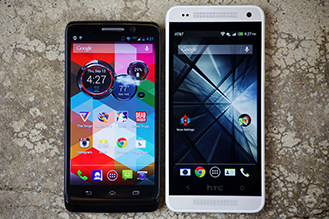 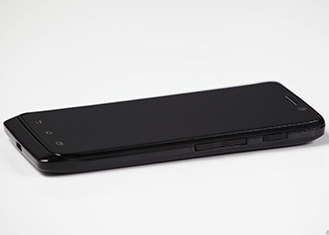 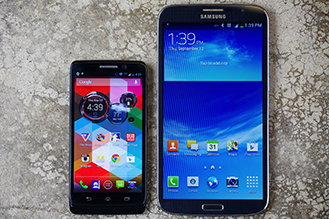 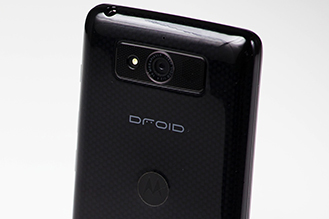 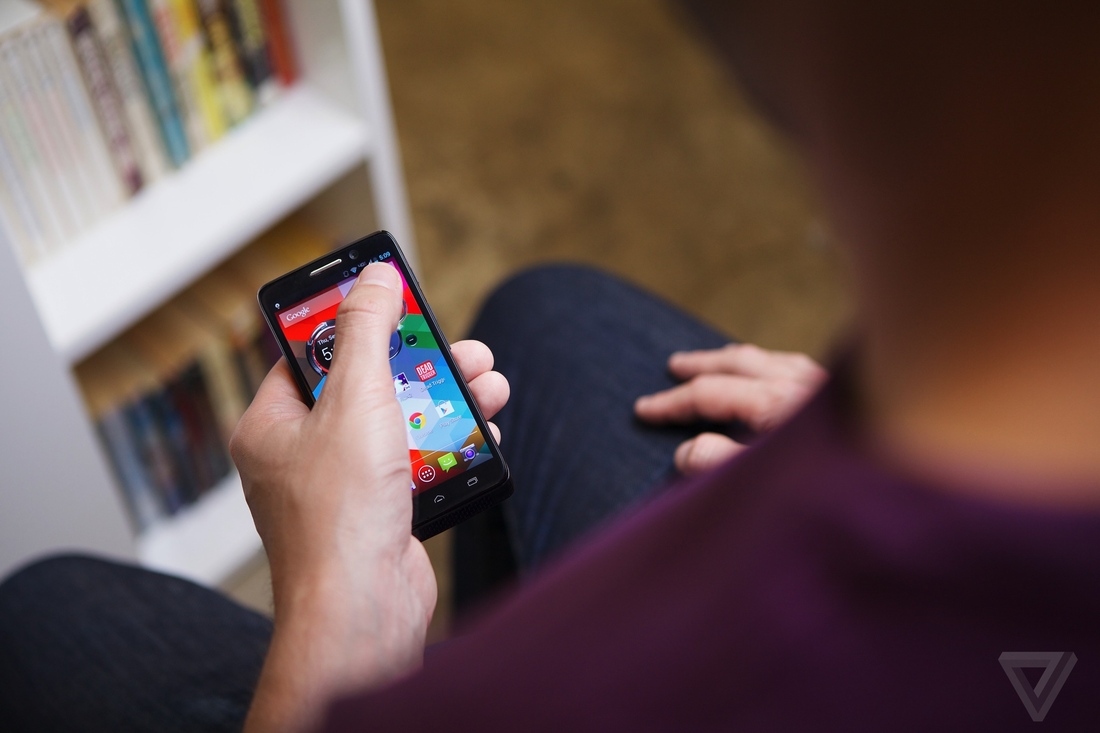 Despite the name, the Droid Mini doesn’t look like a shrunken version of either the Droid Maxx or Ultra. The 0.34-inch-thick body is just a tad too chunky for the 4.81 by 2.41-inch body, making the Mini look almost like a plumper stepchild, or as if the battery has exploded. It has the same face as its family members, but a slightly disproportionate body. The back and sides have a subtle black and gray cross-stitched design that can only be seen at certain angles, and there’s a seam that runs around the sides and onto the front of the device that almost makes the Mini look like it might slide open and reveal a keyboard. (It doesn’t.)

Miniature phones do have one striking advantage over their larger counterparts: it’s a lot easier to create a beautiful and pixel-dense display. 720p is a high enough resolution on a 4.3-inch screen that individual pixels can’t be seen with normal use (we saw the same thing on the HTC One mini), and the Droid Mini’s screen looks great. Also, rather than sticking with an AMOLED display, like the Ultra, Maxx, and Moto X, the Mini uses a TFT LCD panel. It’s not quite as battery-friendly as AMOLED, but it looks much better. 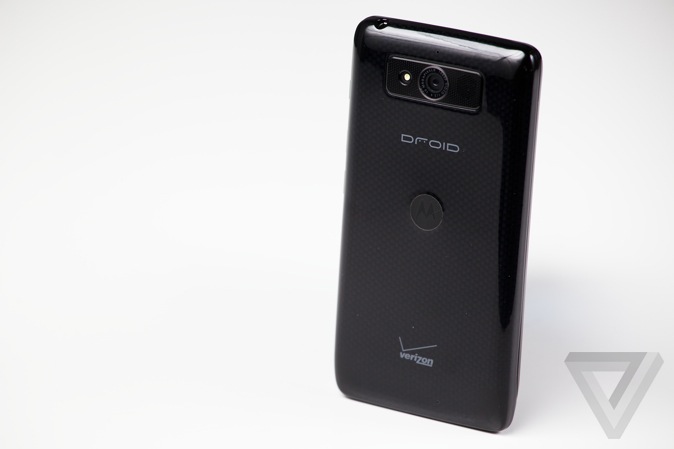 The strange thing about the Droid Mini is that Motorola clearly knows how to make small phones, or even big phones that feel small. The Moto X is one of the most comfortable phones we’ve used, even with a larger 4.7-inch screen; if Motorola could apply that engineering and design to an even smaller device it could be just right.

The spec war may be slowing down, but it's not over yet

The Moto X also does smaller phones a favor by emphasizing user experience rather than just touting the newest and fastest version of every component — maybe we don’t need bleeding-edge specs after all, it seems to say. But the Moto X is still mostly an experiment, and Motorola has maintained the traditional line of marketing with the three new Droid phones. By the Droid standard and most others, the Droid Mini is firmly second-class.

Much to my dismay, Avi Greengart doesn’t think focusing on a smaller phone is ever going to be worth the effort for a manufacturer. “It’s difficult to hold back from putting your best effort into the largest smartphone in your product line,” he says. “There’s no way to win the specs war with a smaller product, so why try?”

“There’s no way to win the specs war with a smaller product, so why try?”

We’re left with “miniature” phones in a catch-22. Manufacturers are discouraged from creating a smaller flagship phone because they’ll sell poorly next to big, powerful devices — and consumers are discouraged by the limited specs and design compromises. We’ll continue in this loop until companies drop the “mini” and just release a great smaller phone.

The design problems are frustrating because, from a software and performance perspective, the Droid Mini comes with all the bells and whistles of its larger counterparts. All the new Droids run an almost stock version of Android 4.2.2, with a few extra features that greatly improve the user experience. Touchless Control, Moto Assist, and Active Notifications make the phone feel almost like a real personal assistant, an area where Apple’s Siri has fallen behind.

But despite the Droid Mini running this same highly refined interface, the careless industrial design still relegates this phone to second-class status. Motorola could easily have keep the smaller 4.3-inch screen size, designed the phone shockingly well, and charged customers $199 instead of $99. A small $199 phone with a great design is what Apple has been successfully selling for years. 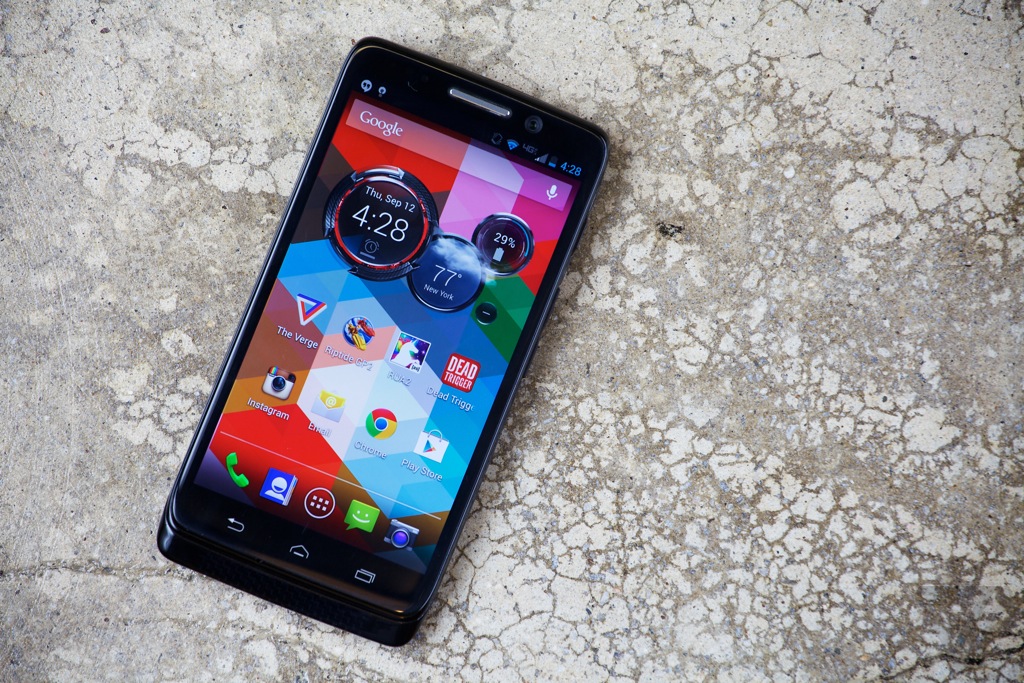 CORNERS HAVE BEEN CUT EVERYWHERE 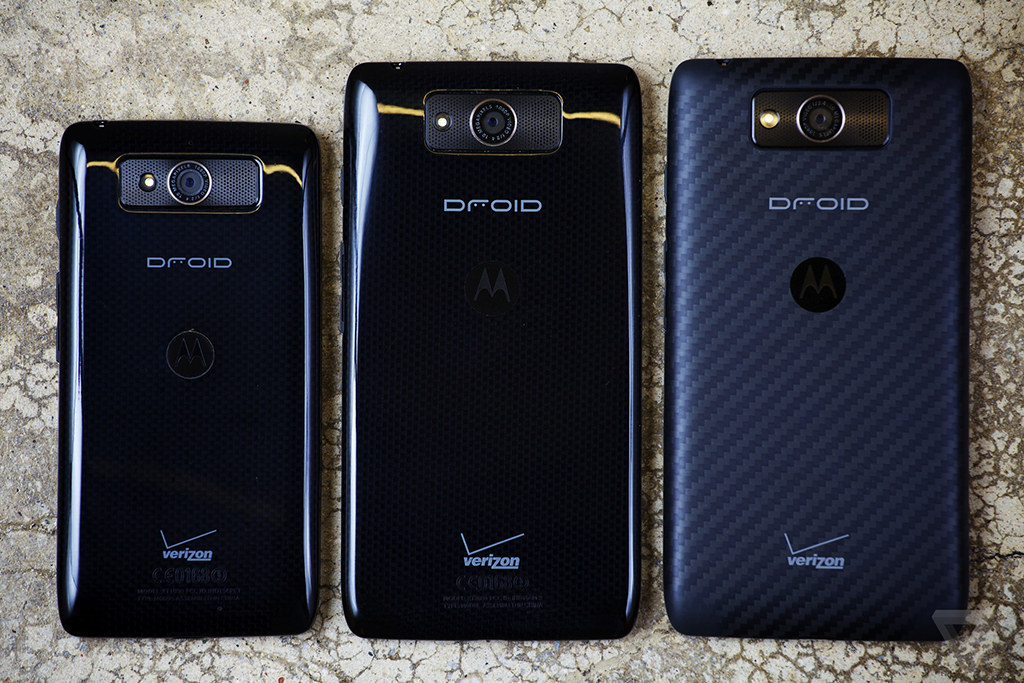 Miniature phones are continuing to prove that mid-range specs are totally acceptable, too. Both the HTC One mini and the Samsung Galaxy S4 mini have enough power to run smoothly despite being lesser versions of the larger smartphones. Similarly, the Droid Mini runs great, even with more processor-intensive games, and I never once wished for more power. Motorola's same X8 chip powers all its newest devices, and it's plenty of power — the Droid Mini makes fewer performance sacrifices than most smaller phones, and it's oh-so-close to parity with the larger models.

The Droid Mini has the same camera as the Moto X, Droid Maxx, and Droid Ultra, which is to say it's wildly inconsistent. The 10-megapixel camera fares decently in low light, but pictures overall are pretty hit or miss. If there’s a darker subject in front of a light background, you’re pretty much guaranteed a bad picture.

With a smaller screen and a large 2,000 mAh battery, I expected longer battery life than the Droid Mini delivered. It lasted just 4 hours and 11 minutes on The Verge Battery Test, which cycles through websites and pictures at 65 percent brightness — it’s lucky to last a full day. I really wanted to love the device: it’s the right physical size and smoothly runs an excellent version of Android — but I just ended up frustrated.

So close, and yet so far

The iPhone’s remarkable success is proof that people do value good experiences in small packages. But for an Android manufacturer to make this same admission would be to undo all the work spent convincing the public that Android is a step ahead of the iPhone just because it’s bigger. “You don’t get people switching from Apple to Android because they want starred emails in Gmail,” said Greengart. “It’s because they want a bigger screen.” Companies don’t want to concede that a bigger screen doesn’t necessarily equate to a better phone because they would risk losing some of these converts.

Manufacturers are still releasing smaller phones like the Droid Mini, but they are simply not as good as the best large smartphones on the market — I'd recommend the Droid Mini over the Ultra, certainly, but you shouldn't buy either one. Small phones are still targeted at placating a segment of the market that doesn’t want a large phone and doesn't demand a first-class experience, but what about the people that do? The Droid Mini comes closer than most, offering nearly identical specs to its larger counterparts for less money, but from the poor design to the weak battery life, it just feels carelessly thrown together. The entire time I used the Mini, I wanted to swap it out for the Moto X.