Electronic tattoo tracks the heat running through your veins

Share All sharing options for: Electronic tattoo tracks the heat running through your veins

Thermometers don't seem like they need reinventing. Just stick one beneath your tongue, wait a minute, and everything you need to know is right in front of you. But there's a lot more that temperature can tell us if we're paying close attention. "Normally on temperature, I'd think that’s not very interesting," John Rogers, a University of Illinois researcher, tells The Verge. "It turns out, measuring skin temperature, let’s say to a tenth of a degree ... that says something very meaningful about your physiological status and health."

The job of a quarter-million-dollar machine for just pennies

Rogers has been working on a series of super-thin, flexible electronics that are both wearable and totally unnoticeable to their wearer — they're so thin, they've often been referred to as electronic tattoos. His research team's latest device contains a hypersensitive thermometer that he says can do the job of a quarter-million-dollar thermal infrared camera, even though it costs only pennies worth of parts. Not only can the wearable thermometer do the same job, Rogers says that it can do it better: because it attaches to the skin, it can measure temperature over a long period of time, during a person's day-to-day activities, and without its target shifting around and introducing inaccuracies to a camera's steady sensor.

For certain people who can't properly control their body temperatures, knowing their skin temperature as far down as to the millikelvin (about two one-thousandths of a degree Fahrenheit), as this device allows, can let physicians tell exactly what's going on underneath it. The device can watch how heat flows through the bloodstream, or see how the dilation and constriction of blood vessels subtly alters the temperature around them. "That can say important things about cardiovascular health," Rogers says. 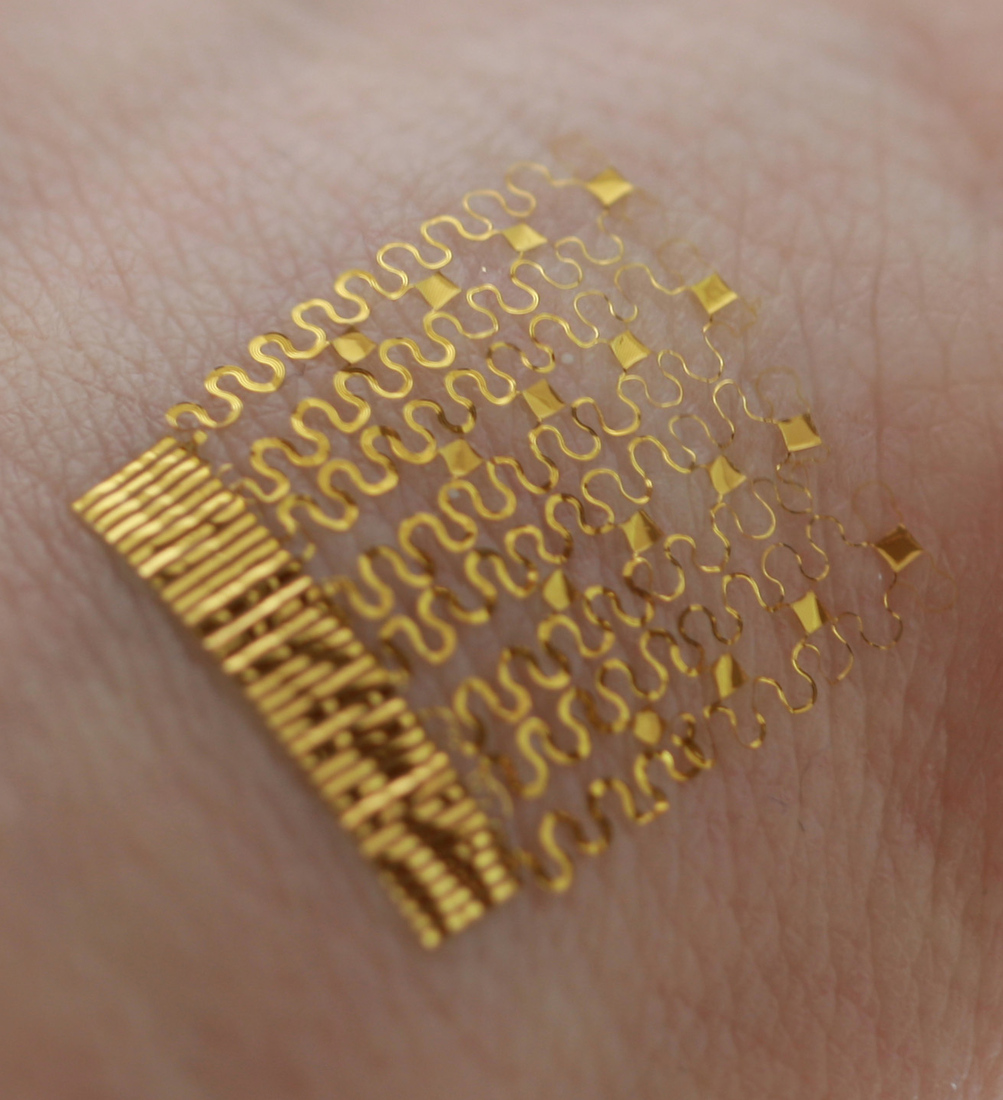 His team's new device, which is being described today in a paper published in Nature Materials, resembles the wearable electronics that Rogers has been working on for years. It looks like a small gilded barcode with vines snaking out of its top, and is applied to the skin using a water-soluble glue. Two different versions were created that work in different ways, but both have the same result: they can precisely determine temperature at multiple points across the skin, and can even introduce fine spikes of heat in order to measure how the skin reacts.

It took a couple years to build the sensors, but the majority of work involved with engineering the device has already been handled by prior or parallel research efforts. The next step is making them truly wireless — this version still requires external power — but now Rogers and colleagues can largely focus on introducing new sensors and applying them to new situations. In this case, his research group was contacted by the National Institutes of Health — the United States' primary medical research agency — which said it was looking for a better way to measure the temperature of skin.

"We started on the skin. The same device can be applied anywhere on the body."

Applying this wearable thermometer to the skin may be just the beginning, however. "There are lots of other places on the body where you might want to be able to do those kind of measurements," Rogers says. His team is experimenting with how the device could be applied to internal organs, even being placed right against the interior wall of the heart to measure its own properties. Right now that's just temperature, but additional sensors could be added on to report back an even richer body of detail, says Rogers. "Skin is a starting point."