For the fans, by the fans: Kickstarter brings 'Dick Figures The Movie' to life

Share All sharing options for: For the fans, by the fans: Kickstarter brings 'Dick Figures The Movie' to life

2013 has been the year that Hollywood took to Kickstarter, with household names using the crowdfunding platform while many could have arguably found traditional funding in the first place. Dick Figures The Movie, coming out on September 17th, is the flip side of that coin. A feature-length version of the popular YouTube animated series, it’s a project that creators Ed Skudder and Zack Keller say couldn’t have been realized through traditional means: a movie that draws on the humor of internet culture, made possible by internet culture, that’s counting on the very same to help it take flight.

"We actually did for a short time try approaching studios."

"We actually did for a short time try approaching studios to do a feature film, but they were thinking traditionally to make this movie," Skudder says. Dick Figures is the story of Red and Blue, two color-coded stick figures that go through a series of action-packed — and yes, often juvenile — adventures. The YouTube shorts, two to three minutes in length, take about two weeks to turn around, and pull liberally from internet memes and action movies for a frenetic, concentrated dose of action and antics. For the feature film version, studios were suggesting a budget of several million dollars, staggered release windows, and a creative process that generally strayed away from what had garnered the series more than 350 million views on YouTube.

According to Skudder, "it was going to take so much more time, effort, and a lot more money that wasn’t needed to make the best movie that we could." Realizing the draw of the show’s fan base, they instead turned to Kickstarter and raised over $313,000 — at the time the most successful Kickstarter campaign ever for an animated project. 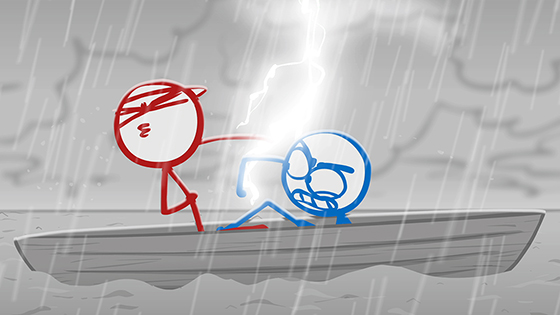 Skudder and Keller, who wrote and directed the movie, have had feature films in the back of their minds for some time. The duo met at the University of Southern California’s School of Cinematic Arts, where they focused on live action rather than animation. Still, when the time came to ask fans to contribute to the Dick Figures campaign they initially found some of the same kind of criticism that Zach Braff encountered with his much-critiqued Wish I Was Here Kickstarter.

"There was definitely a pushback."

"There was definitely a pushback, and we actually made a video to explain that," Keller says. Fans had grown accustomed to watching the YouTube series for free, and assumed that the two creators were the only people working on the project. In reality, it took additional animators, composers, and other personnel to bring things to life. "We create it very much like a traditional show or movie, but for the web. And so we had to end up explaining where all that money was going," Keller says. The transparency worked, allowing the project to hit its goal, but there were a few snags along the way. Like when several underage kids signed up for the $10,000 pledge tier.

"The first one, actually, we found on Facebook," Skudder laughs. "Someone posted on their wall or commented, and said ‘I just pledged $10,000 but can’t fly out to Hollywood because I’m 12.’" The duo emailed him right away — "We would’ve felt pretty bad if we had taken $10,000 from a kid," Skudder says — but the donor claimed he had his parents’ permission to make the donation. Thankfully, the transaction ended up not going through in the end. 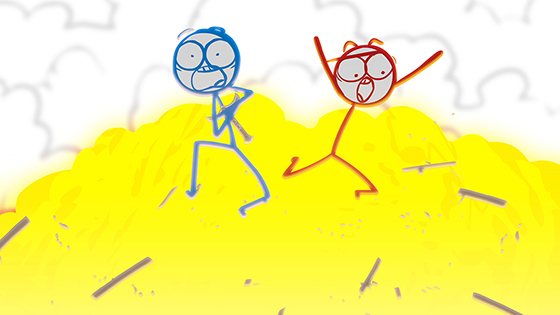 Given the history of the series it made sense to go with a pure digital distribution plan for Dick Figures, and when the movie’s released tomorrow it will be available for purchase and rental through the expected channels at Amazon and iTunes. The original series, however, succeeded due to word-of-mouth promotion between excited fans, and with the film Skudder and Keller are hoping to reward those that do the same. Through a deal with the online distribution company Yekra, fans will be able to share what are essentially affiliate links for the movie, and get a 10 percent kickback for any resulting sales.

For those that love the Dick Figures brand of goofy, adolescent humor, the film is an example of technology completely delivering on its promise to democratize the making and distribution of creative works. "We used to think the problem back in the day was raising money and then getting distribution," Keller says. "And now with places like Kickstarter you can raise money, and now with digital distribution you can find distribution. So it’s completely changed the game for smaller filmmakers."

"The more we do it the more everyone can do it, and it kind of snowballs on itself," Skudder adds. "So I’m looking forward to the indie sector opening up more, and seeing more great content come out of smaller studios and individual creators."