Disney magic turns your ear lobe into a speaker

Disney magic turns your ear lobe into a speaker

A new project from Disney Research Pittsburgh lets you transmit sound through your body. Inshin-Den-Shin, which takes its name from a Japanese idiom for "unspoken mutual understanding," consists of nothing more than a voice-activated microphone, a computer, and a thin wire. After you talk into the microphone, the message is looped by the computer's sound card and sent back to the microphone as a high-voltage (300 Vpp), low-current (50 uA) electric signal.

Anyone holding the microphone then conducts that signal, and can pass it onto someone else by touching them near their ear. Touching another person's ear creates a modulated electrostatic field that in turn creates a tiny vibration of the ear lobe. The finger and ear lobe form a speaker of sorts, allowing the formerly inaudible signal to be heard. As demonstrated in Disney Research's video, the signal has sufficient power to pass through two people before being heard. 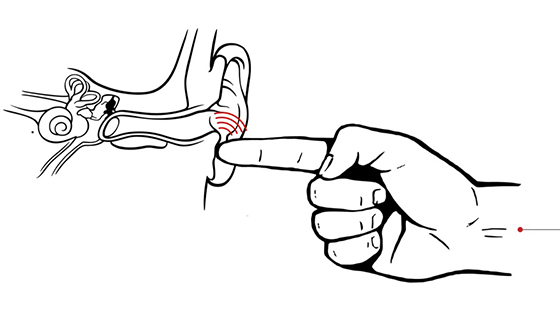 Disney isn't the only company interested in passing electric signals through your body. Both Microsoft and Sony have patents related to Body Area Networks, a set of wireless devices working in synergy with your body. Sony actually patented a system to transmit sound through your body to a pair or headphones, while Korean researchers developed a system that would require a microchip to be implanted in your arm. Disney hasn't announced any plans to commercialize Inshin-Den-Shin yet, but it's easy to imagine a simplified version of this featuring in children's toys.