A mysterious, intelligent species supposedly created the eerie and intricate designs found in Alien, but a group of designers have programmed an algorithm that can make something similarly awe-inspiring almost entirely on its own. The designers have used their algorithm to map and 3D-print a complete 10.5-foot tall, 172-square-foot room, which they're calling "Digital Grotesque." The installation was printed entirely out of sandstone, which the designers say is a first for 3D-printed rooms. The printing process took a full month, but it only required another day to paint and assemble the final structure.

Though the algorithm wasn't completely random, the designers say that what it generates isn't "entirely foreseeable" either. The result is a bony, symmetrical altar of sorts that looks like it's made from the same terrifying, mechanical sources as the Space Jockey's control room. "Digital Grotesque is between chaos and order, both natural and the artificial, neither foreign nor familiar," the designers write. A full series of images of the sculpture can be seen at the website for Digital Grotesque. 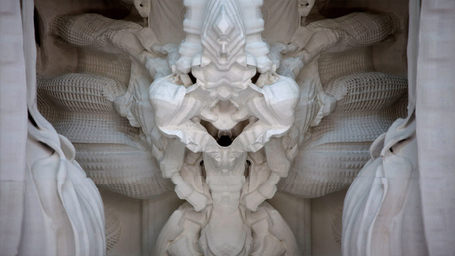