Microsoft's Bing search engine is getting a new look. A year in the making, Bing is dropping its curly blue logo for a modern design that closely matches the rest of Microsoft's recently redesigned product branding. "The logo, obviously, is a big deal for us, a lot more angular and fresh and sharper than we've used in the past," explains Microsoft's Lawrence Ripsher, a design lead for Bing’s User Experiences, in an interview with The Verge. After "literally dozens" of color experiments, Microsoft has selected an orange Bing logo that's almost golden in its appearance.

The color is actually the same one used in a quadrant of Microsoft's corporate flag logo. Bing's angular and modern logo comes just after Yahoo revealed its own redesigned logo that has generated some criticism from typographers. Microsoft has opted for a stylized lowercase 'b' that's sharp and aligns neatly with the Segoe font for the wordmark. "Bing has typically been kind of curly, softer, so this fits much more with the modern kind of approach we've taken on some of the other logos," says Ripsher.

While you may have seen the logo earlier this year, it's not the only change Microsoft is making to its search engine this week. Bing has also been overhauled and rewritten from the ground up to support a new responsive design that adapts across PC, tablet, and phone. The result, available in preview here, combines some existing features that were buried away in the old design, and some new features that help surface information a lot better. The daily Bing image will still serve as the entry point to the search engine, but results will start to look different. 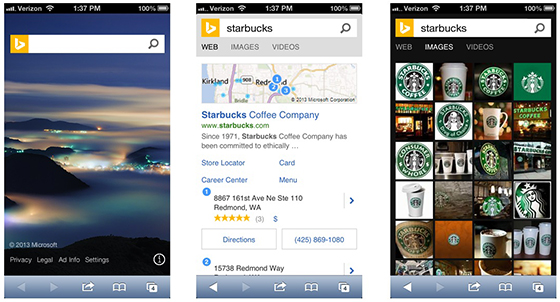 Search results before the page loads

One of the big new changes is "Page Zero," a method to quickly provide an answer or information before a full results page. Page Zero pops up as you type in the search bar on Bing, and if you're searching for two similarly named people then it allows you to identify the correct subject of your search before the results are listed. For certain queries you might even get news, images, or video links, and common actions like check-in will be displayed on airline queries.

Another change is Pole Position, a new area at the top of the search results that answers queries directly. If you're searching specifically for "pictures of Katy Perry" then they'll be displayed inline at the top of the results. Pole Position will be used by Bing when it's confident it has the correct result for the query, usually when it's very specific. If you searched for "New York weather" then the current weather in that region would be displayed, and facts like celebrity ages would also be shown clearly at the top of the page with a source link.

Microsoft is also combining its Snapshot and Sidebar features into a single view that will provide factual information about a query and social input from friends on Facebook or Twitter. The company seems more confident with its social results than ever before, bringing them inline increasingly. It has been a selling point for Bing, but it's now being raised to a level where many more users will notice and interact with it.

Most of the design changes are subtle, but Microsoft is testing more radical overhauls of the search results layout. "This design is really like a new framework for how we think about color, fonts, spacing, all those things," explains Ripsher. "Because we've done a ground up redesign, we're in this position that we can vary and tweak any one of those variables independently or together." Ripsher says his team has tested colors and pushed some aggressive designs to users, but it's a delicate balance of what works best. While the feedback on radical new designs is always positive initially amongst small groups, Bing gets different feedback when it starts to roll out more broadly. "As people get used to a new, fresher, more visually appealing update it's going to allow us to continue building on that as well."

A new lick of paint might not be enough to tempt users away from Google, but Microsoft is hoping its approach of partnering with web services and creating a platform for third-party developers, and even its own products, to integrate Bing functionality will serve it well for the future. "What you're seeing now is a recognition that the web is bigger than us, it's bigger than Google's properties, and it moves at a pace that's incalculably fast," says Stefan Weitz, Microsoft's director of Search, in an interview with The Verge. While Google Now works well when it's combined with Gmail, Google Search, and YouTube, you need to fully embrace that ecosystem to get the benefits. "Our approach at Bing has been, for a long time, to not necessarily build our own social network, to not build our own video channel, to not build all these things that we want to work with, we partner." These partnerships include Twitter, Facebook, LinkedIn, and Klout.

"They're building a nice great wall of Google..."

While Microsoft is aggressively pursuing its goal of "Bing as a platform," Weitz believes it's Bing that is opening up the web to platforms to push innovation, not Google. "They're building a nice great wall of Google, and we are more looking at the web as something which, it doesn't matter how much money you have, you simply can't own it." Big bets from Microsoft include building Bing directly into the search interface in Windows 8.1, and a new partnership with Apple to power its Siri web results in iOS 7. New tools aim to make it easy for third-party web or app developers to integrate Bing functionality into their projects. "There's not enough money in the world to buy all the innovation that's happening right now," claims Weitz. "Even if you could, it's the wrong model."