As if Apple's gold trim around the new iPhone 5s wasn't enough to show off its intended class, the company has also teamed up with the luxury fashion house Burberry to help promote it. As teased last week, Burberry has posted a 15-minute video taken exclusively on the iPhone 5s at its London, Spring/Summer 2014 fashion show. The colors and details shown in the footage look great for a smartphone — though the shooting conditions were highly controlled. According to Pocket-lint, 14 iPhones were used to capture the footage: nine on the runway, three on a mount that moved and swiveled, and one attached to the ceiling.

While that doesn't make the footage less genuine, it does mean the cameras were likely in well-lit areas and kept free from the average-user's shaky hands. Neither Apple nor Burberry are hiding the setup though — Pocket-lint has posted behind-the-scenes photos, and it'd be hard not to notice the camera's gliding movements as both companies try to make their products look good. For Apple, selling the camera improvements on the iPhones 5s may be a big deal too. Though its Touch ID fingerprint sensor is perhaps the most tangible selling point, the camera's improved quality is an obvious second. 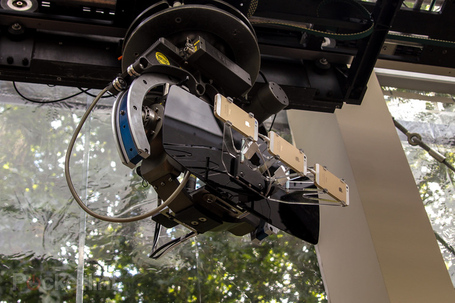 Burberry's chief creative officer, Christopher Bailey, tells Pocket-lint that the promotion grew naturally out of his friendship with Apple's Jony Ive. Though Bailey didn't have too much to say about the camera, he did comment on its slow-motion mode, which he says is his favorite part of the new phone. "Everyone is obsessing over slow-mo, oh my god," Bailey tells Pocket-lint. "I was doing it last night in rehearsals and it was amazing."