Changes are coming, but don't expect a lockdown

You wouldn’t steal a car, goes the old anti-piracy warning. But would you print one from The Pirate Bay? It’s a question that’s been asked since 3D printers started entering the mainstream. It’s also one that raises an inevitable follow-up question: if 3D-printing piracy grows, will companies be tempted to wage war against it by controlling where, when, and how much you can print?

3D printing’s first copyright skirmish came in 2011, when Netherlands-based designer Ulrich Schwanitz began selling his own printed version of the "impossible" Penrose Triangle. While Schwanitz kept his process secret, fellow designer Artur Tchoukanov reverse-engineered it and posted a similar file on MakerBot’s Thingiverse catalog — leading Schwanitz to promptly file a takedown notice. MakerBot CEO Bre Pettis removed the files and quickly added DMCA-specific text to the Thingiverse terms of service — a section that remained even after Schwanitz dropped his complaint. "For better or worse, we’ve hit a milestone in the history of digital fabrication," wrote Pettis.

"For better or worse, we’ve hit a milestone in the history of digital fabrication."

Since then, questions about piracy and DRM have cropped up on a regular basis. A patent by the notorious troll firm Intellectual Ventures raised the spectre of locked-down 3D printers that would scan all incoming files for potential infringement. And some companies have started issuing takedown requests for models of copyrighted objects and characters. So far, though, there’s been little connection between those two things. Even if Square Enix doesn’t want somebody selling Final Fantasy VII figurines on Shapeways, it’s not putting out its own DRM-wrapped designs or trying to get printers to recognize Sephiroth. Copy protection for 3D printing, though, is very much a reality — it’s just one that most consumers may not see any time soon.

"The whole 3D printing market in the consumer sense is probably in the same space where personal computers were when they started appearing," says Kimmo Isbjörnssund, founder of 3D copy protection company Fabulonia. "Security wasn't an issue; it was about the novelty." Despite the prevalence of Yoda and other copyrighted designs on Thingiverse, companies still often ignore them as long as they’re not a commercial product.

If more consumers buy printers (or they become more common in schools, libraries, and retail outlets) companies may start cracking down and selling their own models. But Isbjörnssund doesn’t think they’ll make a move until there’s an alternative to the current practice of sending over a file, whether copy-protected or not. Fabulonia, he says, has gotten the ball rolling with its streaming box for 3D printers. Creators can set up a network, upload files to an encrypted dashboard, and the box will authorize production on a case-by-case basis. Users get the physical object, but not access to the file itself.

Even so, he thinks this won’t be enough for retailers like Amazon or collectibles giants like Disney. "It is not realistic to assume that huge name brands would distribute their original files via any means, [with] streaming or DRM, to consumers without having embedded solutions," Isbjörnssund says. That would mean putting software or hardware straight into printers. 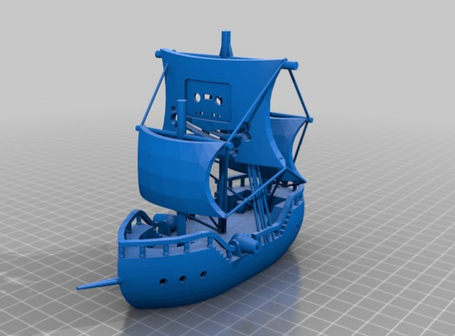 That direct integration is an ongoing project for Fabulonia, but it’s currently focused on industrial manufacturing instead. Though Isbjörnssund wouldn’t give names, he says his company has inked deals with national defense departments and business networks running thousands of printers. The printed products, likewise, are a mystery, but they could be anything from simple prototypes to pieces of an F-18 fighter jet. These groups aren’t selling goods on a wide-open, large-scale consumer market — which Isbjörnssund cites as one reason retailers are so worried — but they still don’t want companies knocking off their patented work.

For now, that means Fabulonia is more like an anti-counterfeiting tool than traditional DRM. With traditional manufactured goods, factory owners might sign a contract preventing them from copying or illegally distributing the items they make. If they disregard that agreement, though, it’s still possible to run a "ghost shift" pumping out counterfeit products that are virtually identical to their official counterparts. A streaming dashboard would theoretically let designers authorize only a certain number of pieces, then see whether they’d printed correctly.

Home printing is still a small market, but industrial design is another story

Andre Wegner, CEO of fellow copy protection company Authentise, agrees that it could be a while before Disney will let you print your own commemorative C-3PO. "It's a tiny market," he says of the overall printing landscape. "On the consumer side, I don't think we'll see more than a million printers in the next five years." But as that number grows, he hopes Authentise’s upcoming service SendShapes will be ready. Much like Fabulonia, SendShapes will stream encrypted data to a printer, hiding the actual file. Wegner, though, doesn’t want to rely on a box like Fabulonia does. By late next year, he says, the API behind SendShapes will start showing up directly in some 3D printers.

Besides the obvious consumer market, Wegner sees SendShapes' API opening up entirely new options. A company like Boeing, for example, might not just stream parts to a manufacturer. If it were confident the design would stay safe, it could sell pieces directly to remote airports, letting them perform repairs immediately instead of waiting on a slow or unreliable supply chain. Buyers, meanwhile, can be sure that their parts are coming straight from a trusted source.

Both Authentise and Fabulonia are controlling how a file is used in some form, but they’re aware that in 2013, DRM is little more than a dirty word. Wegner is quick to stop me when I use the term, saying that SendShapes won’t stop anyone from printing a file they own on their machine. "I fundamentally disagree with that," he says, describing how he spoke with both Creative Commons advocate Cory Doctorow and Defense Distributed figurehead Cody Wilson while working on SendShapes. To Wegner, SendShapes isn’t going to restrict 3D printing any more than Spotify has restricted music — perhaps less, since buyers are left with a printed object to keep.

If printers get locked down in the near future, it probably won’t be for copyright reasons. Cody Wilson’s printed Liberator pistol set off a flurry of debate over how to stop rampant gun-printing, and Danish company Create it Real thinks it’s found a solution. Earlier this year, it announced a kind of firewall for firearms, which would check each file in a 3D printer’s queue against a database of printable components. If an exact match was found, it wouldn’t print.

Copy protection creators know that in 2013, DRM is a dirty word

It’s not clear how comprehensive the system is at this point. But company founder Jeremie Gay says it’s been integrated into Create it Real’s existing printer software suite, and he’s in talks to put it directly into some consumer-level printers as well — he says to expect the first models within a few months. There’s been widespread worry that governments will crack down on 3D printers if they’re seen as dangerous, and Gay believes companies will want to head off potential lawsuits from naive buyers whose guns blow up after printing.

Create it Real’s plan is precisely the kind of thing that could keep DRM opponents up at night. It’s a tool for controlling what people can make, based on a central database run by Create It Real and built right into machines. Gay admits that, in theory, any object could be added to the no-print list. Nonetheless, he insists that Create it Real won’t usher in a new age of fettered replicators. He sees the system as a kind of parental control, suggesting that manufacturers offer their printers both with and without anti-gun software. And building an anti-piracy database isn’t in the spirit of the project, Gay says.

It’s always possible that another company will copy the system, or that rights holders will start pushing aggressive anti-piracy tactics as they move into a new market. But many people still don’t even know how consumer 3D printers will ultimately be used, much less how or if they’ll be regulated. So hold off on selling that Game of Thrones iPhone dock, but don’t worry just yet that your printer will start playing copyright cop.