Fork in the road: Cyanogen raises $7 million to build a better version of Android

Fork in the road: Cyanogen raises $7 million to build a better version of Android

Cyanogen, makers of popular software based on Android that extends the abilities of smartphones, is making a bid for the mainstream. The four-year-old company, which began as a one-person side project, said today that it has raised $7 million from Benchmark Capital and Redpoint Ventures. The goal is to vault past Blackberry and Windows Phone to become the third-most popular mobile operating system, after traditional Android and iOS. And the company is already closer than you might think.

CyanogenMod, the company’s free open-source replacement firmware, has more than 8 million users, CEO Kirt McMaster says. But that counts only users who have elected to share data with Cyanogen, he says, estimating that the true number is two to three times that amount. "There’s always been lot of talk around who’s going to be the third dominant mobile computing platform," says McMaster, who previously co-founded Boost Mobile. "Windows Phone would probably be number three now. If you look at what our actual user base is, we might be equal to or greater than that." Microsoft estimates Windows Phone’s current market share at 4 percent.

Cyanogen’s growth is all the more surprising given how difficult its software is to install. One guide lists 23 steps, and warns users that installing the firmware could damage your phone and void your warranty. Some carriers lock device bootloaders to prevent anyone from installing custom ROMs. "The install process still sucks — it’s pretty brutal," says Steve Kondik, who started building Cyanogen in 2009 while working as a developer in Pittsburgh. He spent 19 months as a software engineer at Samsung before quitting in March.

But millions have waded through that process to access the benefits that Cyanogen affords. Cyanogen brings the latest version of Android to phones that carriers have long abandoned, helping to extend the life of the device. It strips out bloatware installed by the carriers in favor of a near-stock version of Android that can spruced up with thousands of themes. More recently, Cyanogen has introduced a new camera app and a more secure messaging system. "It’s a pretty crappy experience on Android," McMaster says. "We think we can change that. That’s the biggest draw to CyanogenMod."

Raising money has allowed Cyanogen to hire a team of 17, with the developers split between Seattle and Palo Alto. Since closing their fundraising round in April, Cyanogen has been working on two key efforts to expand the firmware’s reach: a one-click installer for Windows, which will help less technically savvy users when it comes out within the next few weeks; and a partnership deal with a hardware manufacturer, which the company plans to announce in the next week or so. It also may pick a more consumer-friendly name; Cyanogen is considering re-branding itself next year, McMaster says.

The company plans to re-brand itself

The company’s vision is to use Android as the foundation for an operating system more focused on productivity than commerce. "The mobile devices out there, they’re just not meant for anybody to use," Kondik says. "They’re essentially mobile cash registers. We want to help you get stuff done, and use these things to their fullest potential." Cyanogen will also place a significant emphasis on security and privacy, Kondik says, taking pains to help users protect their data. 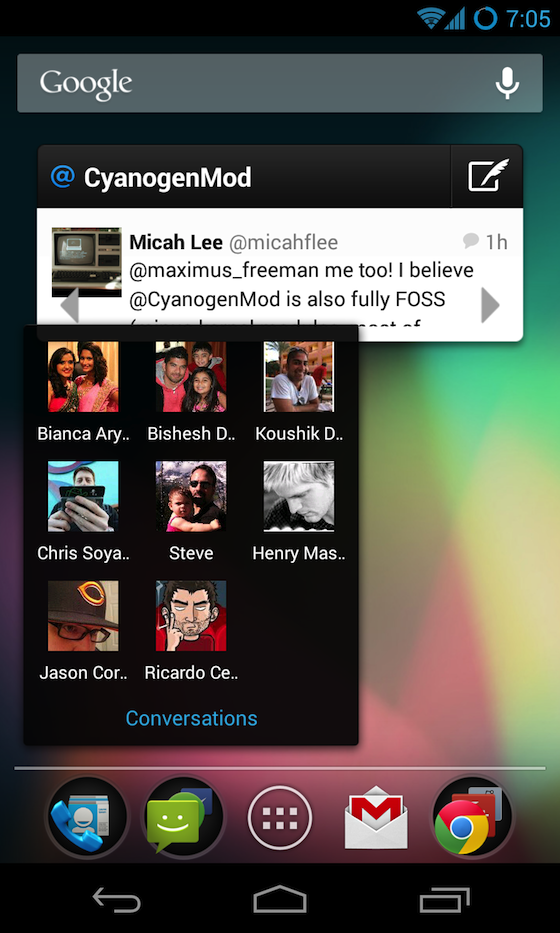 The company plans to keep its firmware free. So how will it become profitable? McMaster and Kondik say they have many ideas for generating revenue, but declined to discuss them in depth. "If you’re the default OS on a device and you have 50 million users, there are a lot of ways to make money," McMaster says. "It’s not just about building a user base. It’s about building great services you can’t get anywhere else."

But what if some of those services get blocked? Core Google apps including Gmail, Chrome, and Maps aren’t open-sourced parts of Android — they’re part of Google Play Services. Using Google Play Services requires that a device be certified by Google. Firmware modifications like Cyanogen bring devices into a gray area where the original phone may have been certified, but the modified version could fall outside Google’s guidelines.

Cyanogen has a long way to go before installing aftermarket firmware is as fun and easy as downloading Angry Birds. Despite the occasional flurry of interest in new operating systems from Windows Phone, or Firefox, or Ubuntu, there are many indications that mobile is a two-horse race. But Cyanogen believes the existing players have been co-opted by carriers and device makers, leaving room for a player willing to push them aside. Kondik should know: he’s attracted millions of users just by building the version of Android he himself wanted to use. "There’s a lot you can do," he says, "whenever you listen to your users on what they want."