Last year, the Nexus 7 set a new bar for Android tablets, bringing unheard-of performance and quality to a $199 price point. Part of the credit for that success belongs to Nvidia, whose Kai program was responsible for driving down the cost of components.

Now, Nvidia's ready to do it all over again: today, the company's announcing the Tegra Note, a $199 tablet that brings far more bang for the buck than that original Nexus 7, including some highly desirable new features. The 7-inch tablet packs a Tegra 4 processor, an extremely precise built-in stylus with multiple tips, and a camera that can capture HDR images and slow motion footage thanks to the computational photography capabilities of that Tegra 4 chip. That's in addition to 16GB of onboard storage, a microSD slot, and a micro HDMI socket. The only obvious weak spot on the spec sheet is the 1280 x 800 resolution IPS display, when you can get the new Nexus 7 for $229 with a far denser 1920 x 1200 panel.

The Tegra Note also has special speakers with a bass-reflex port, for what Nvidia's calling "the widest frequency range in a tablet," and the device extends the Nvidia Shield control scheme to any compatible Bluetooth game controller, allowing you to navigate the Android OS wirelessly when you have the tablet hooked up to a TV. In case you're wondering, the Tegra Note is indeed the Tegra Tab that leaked out last month, with a different name. "We got a lot of feedback that the stylus is the key selling point," the company explains. 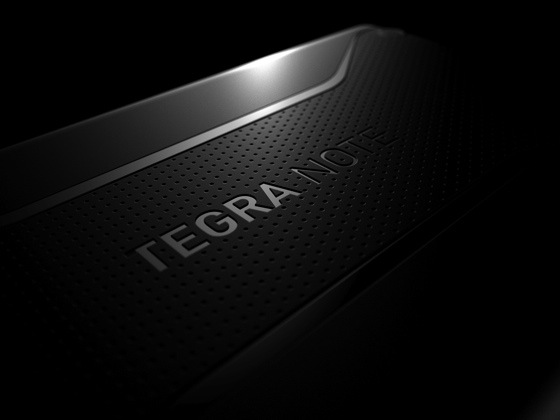 Perhaps the most interesting part is where the Tegra Note will be sold — and by who. While Nvidia mobile business director Matt Wuebbling tells us that his company fully designed and will build the actual product that will appear on shelves, Nvidia won't be selling any of the tablets itself. Instead, the company's taking a page out of its GeForce graphics business and supplying partners like EVGA and ZOTAC with tablets that are ready to go. Nvidia will provide a pure, stock Android experience, and will be responsible for issuing software updates to all the tablets at once. "They can provide tablets packed with innovation and features at prices they may not have been able to deliver on their own. In turn, Nvidia gains access to their deep sales and distribution expertise in regions worldwide," reads an Nvidia blog post.

The other thing Nvidia gets, of course, is a market for its Tegra 4 chips, which the company has admitted were a little late to market and appear to have been suffering a bit as a result... but Wuebbling suggests we can probably expect to see this business model continue with future Tegra processors.

What will the tablet space look like when several manufacturers are selling basically the same exact powerful, inexpensive tablet under different names? Nvidia's most direct answer is that it won't: that partners were chosen who don't compete with one another in their local region or at etail. The indirect answer is that these devices won't necessarily be identical in future implementations. The company told us that there's definitely potential for this program to change, for partners to be able to tweak and customize their Nvidia-sourced tablets to some degree. "Everyone wants to differentiate and we'll see how this develops over time," Wuebbling says.

The first devices should ship this October, according to Nvidia.