Despite Google's protests, the MPAA still says Search is a pirate's paradise

Despite Google's protests, the MPAA still says Search is a pirate's paradise

The MPAA isn't buying Google's argument that search isn't keeping pirate sites in business, and now it says it has the data to prove it. Today, the organization published a report analyzing how people got to a series of infringing sites. According to its metrics, 19.2 percent of visits to the offending sites came through a search engine, with 82 percent of that search traffic coming from Google. And like the RIAA, the MPAA says Google's demotion of known pirates isn't doing anything to help the problem. But what's going on behind the numbers? And why does Google's own analysis differ so starkly?

For one thing, Google and the MPAA are arguing from almost completely different standpoints. Google has consistently looked at piracy through its lens as a search provider: it handles billions of searches a day, and pirate queries are a drop in the bucket relatively speaking. To the MPAA, though, it's the total amount of piracy that matters. "Search engines tend to try to focus the conversation on this percentage and the fact that the majority of the searches conducted daily for movie titles generally lead to non-infringing sites," says the report, but "20 percent of daily searches still represents an enormous number." It's also a question of framing. The MPAA sees roughly 20 percent of referrals as a huge number, but Google has cited a similar statistic favorably, saying that "less than 16 percent" of traffic to The Pirate Bay comes from search engines. And like Google's own studies, the MPAA's report relies as heavily on interpreting the data as it does on collecting it. 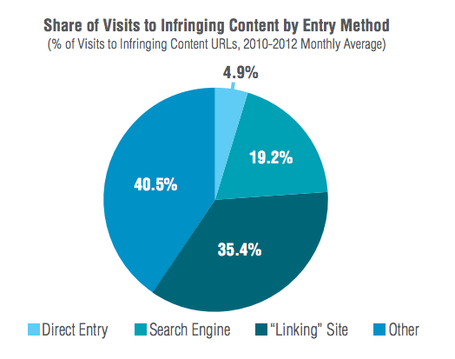 Assuming Compete's web traffic analysis, which looks for how users likely visit a catalog of 12 million infringing URLs, is correct, a few basic statistics form the core of the study. 40 percent of users got to the material through a forum link, bookmark, or blog, and 35 percent came from a portal that provided links but didn't host any files itself. Below that, you get the 19.2 percent number from searches and around 5 percent who went to the site or page directly. Of searches, 82 percent come from Google, a slight overrepresentation given its estimated 67 percent market share. But how do those searchers find the pages? That's where it gets interesting.

The MPAA says there are three basic categories of search that lead to pirated movies or TV shows. The first is basically navigational: someone searches for "Megavideo" or "The Pirate Bay" and gets exactly what they were looking for. The second is a search containing a title like The Dark Knight Rises. And the third is a "generic" search, which the MPAA describes as something like "watch TV online" or "free movies." But how those are distributed makes all the difference. If people are just using Google as a substitute for the URL bar, that's not great for the MPAA, but it's hard to say people didn't already have a good idea of what they wanted. On the other end of the spectrum, the MPAA suggests that Google is all but inducing people to pirate by giving them links to torrents and streams when they run a simple movie title search. "Search engines bear responsibility for introducing people to infringing content — even people who aren't actively looking for it," says former senator and current MPAA head Chris Dodd. 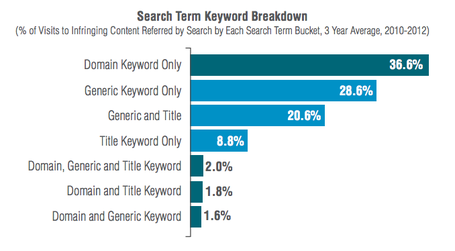 Overall, moderately more people search for a combination of those last two terms than for a pirate site name, bolstering the MPAA's argument. When you break down the numbers, things get a little more complicated. 36.6 percent of people are only looking for a site, not a specific movie or a generic keyword. A little under 30 percent want to watch movies online or for free, and about a fifth look for something like "watch The Dark Knight Rises online." The MPAA's data suggests that users may also use search only initially, then head directly to pirate sites once the damage is done. Less than 10 percent of searches, though, fit the MPAA's worst-case scenario of people who were just looking for information about a movie and were shunted onto a pirate site.

"Do they want to be the getaway car for stolen content and mass exploitation of private property?"

The more difficult question is whether Google's anti-piracy measures have had any effect. To determine this, Compete essentially examined the number of referrals it believed came through Google and compared them year over year, finding virtually no statistical difference. Then, it looked at users coming in directly from searches and checked whether the page rank of those results had dropped, again finding no significant change. The RIAA has found similar results, and Google hasn't given hard numbers about changes, pointing instead to its overall levels of compliance.

Google declined to comment on the study, pointing us instead to its previous anti-piracy report. The MPAA and its supporters, meanwhile, continue to take a hard line on Google's refusal to curate its links more aggressively. "The question search engines need to answer is this," says Representative Marsha Blackburn (R-TN), also quoted for the study's release. "Do they want to be the digital highways for legitimate information, entertainment and education, or do they want to be the getaway car for stolen content and mass exploitation of private property?"