HP's new gesture-control laptop is the first with Leap Motion

HP's new gesture-control laptop is the first with Leap Motion

Touchscreens are now fairly standard in Windows 8 notebooks, but HP's new Envy 17 Leap Motion SE has integrated yet another type of input: touchless. The Envy has Leap Motion's gesture recognition technology built directly into the palmrest, allowing users to move seamlessly between the touchpad, touchscreen, and 3D gesture control.

This integration is powered by a new Leap Motion microsensor that's 70 percent smaller than the standalone peripheral. The new module is specifically designed to be embedded into various devices, which could allow the company to grow larger than it would as just a USB accessory manufacturer.

HP appears to be just testing the technology for now, however, as the Leap Motion Controller will only be available in a single notebook configuration. The Envy 17 Leap Motion SE has a touchscreen, a fourth-generation Intel Core i5 processor, and Nvidia graphics.

We got to try an early version of the laptop, and we found the placement of the controller slightly awkward. It's located to the right of center rather than above or below the trackpad, and because you need to be a certain distance away from the sensor for it to adequately detect your hands, it's difficult to simply sit with the screen at head level and expect it to recognize your gestures. Optimally, you'll place your hands above and to the right of the laptop, too, perhaps even standing above the machine. Generally, it looked like it might be difficult to quickly switch between, say, the keyboard and the Leap.

We weren't super impressed when we tried the stand-alone Leap Motion Controller, either, but having the technology embedded in a notebook may allow users to sample gesture control without the hassle of yet another device. Many users say they find most value from using a Leap Motion Controller in conjunction with traditional input methods.

Michael Buckwald, CEO of Leap Motion, sees the technology as enabling a new type of computer interaction, rather than trying to replace the keyboard or touchpad. "We want to allow users to control 3D objects using 3D space, like exploring Google Maps or modeling objects." 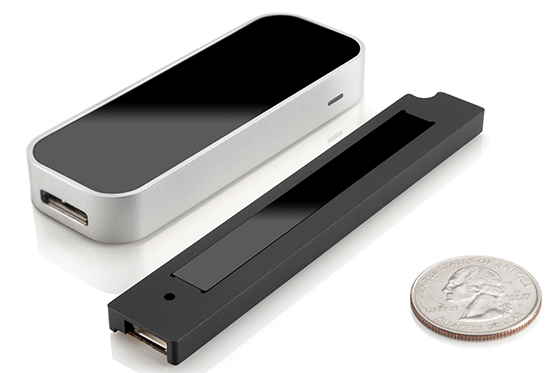 But Buckwald doesn't plan to stop with just laptop integration. He says the new microsensor is small enough to fit in both tablets and smartphones, an area of future interest for the company. "The automotive industry has also expressed a lot of interest in Leap Motion integration, and we're also interested in exploring the different options there."

At the moment, however, the integration of gesture recognition is not without its downsides. HP warns that battery life is significantly decreased when the Leap Motion controller is enabled, and recommends leaving the notebook plugged in while it's in use. There's a keyboard shortcut that toggles gesture recognition on and off, which sounds like a must when away from an outlet.

Bad battery life when the Leap Motion is enabled

The Envy notebook comes preloaded with Airspace, which is the Leap Motion app store, as well as a few popular apps like Sugar Rush and Dropchord. There's no OS control app preinstalled on the notebook, but there are a variety of different options available in the Airspace store, some of which are free.

The HP Envy 17 Leap Motion SE TouchSmart Notebook will cost $1,049, which appears to be roughly the same price as buying a similarly configured Envy 17 along with the standalone USB Leap Motion peripheral. It should be available for preorder on October 16th.