Can we figure out what things smell like just by looking at them?

Can we figure out what things smell like just by looking at them?

Tongues and eyes don’t give scientists much of a problem. Noses, though, are another story altogether.

It’s hard to organize different types of scents. Tastes are categorized into five well-known groups, colors can be labeled and assigned by their component wavelengths, but odors have been much more difficult to label in a systematic and meaningful way. What is the scientific difference between a fragrant smell and a woody smell? In order to give us a rigorous framework of how we think about smells, researchers have identified 10 categories that can be used to describe a broad range of odors using some fancy math. They hope eventually that this work will help to predict what a compound will smell like just by its chemical structure.

Could we someday "see" odors?

The researchers started with a database of 144 different compounds that had been described across 146 labels such as "cinnamon," "rancid," and "cedarwood." They performed a series of analyses to map this large matrix of compounds and labels to a set of 10 more general categories: "fragrant," "woody/resinous," "fruity (not citrus)," "chemical," "minty," "sweet," "popcorn," and "lemon" along with the less appealing "pungent" and "decayed." 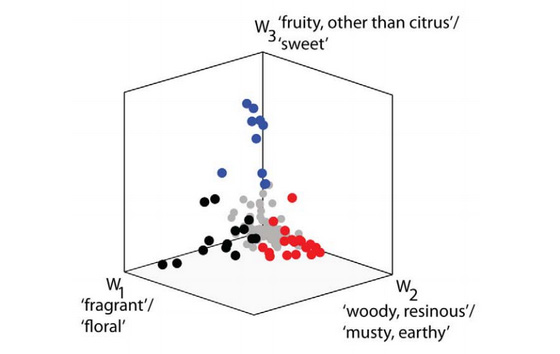 Scents — and the ways we perceive them — are extraordinarily complex

These 10 categories are actually a bit more complicated than their names suggest — they each encompass several of the adjectives from the original 146 labels. For instance, the "fragrant" category is described using 10 of them: fragrant, floral, perfumery, sweet, rose, aromatic, light, cologne, herbal / green / cut grass, and violets. The authors of the research do caution that other choices of categories could be justifiable depending on the application and that there are complicating factors, such as a limited vocabulary potentially restricting the labels. In other words, scents — and the ways we perceive them — are extraordinarily complex.

The researchers hope that this work will help enable the mapping of various chemical structures to their odors. "That's something that nobody's really done with any kind of compelling accuracy," lead author Jason Castro remarked. The researchers found that there is potential to identify the smell of a compound solely by its shape because the compounds within each individual odor category had similar chemical structures. "And obviously perfume companies, flavor and fragrance companies, are really interested in doing that well," noted Castro. If scientists were able to determine what odor a chemical might have simply by looking at it, we could end up with a broader palette of scents for the products in our lives — everything from colognes and deodorants to air fresheners and soaps.