HP reveals five new tablets, but the company's most exciting Slate is built by someone else

HP reveals five new tablets, but the company's most exciting Slate is built by someone else

When HP saw its position as the world's number one PC manufacturer shaken by the Apple iPad, the company vowed it would build an entire portfolio of Android and Windows slates to cement its role. Today, the company has revealed a blitz of five new tablets, ranging from the decidedly cheap to the fairly sophisticated. The odd part is that out of those five slates, possibly the most exciting one isn't built by HP itself. Like a variety of other manufacturers, HP has decided to sell a rebranded Nvidia Tegra Note. 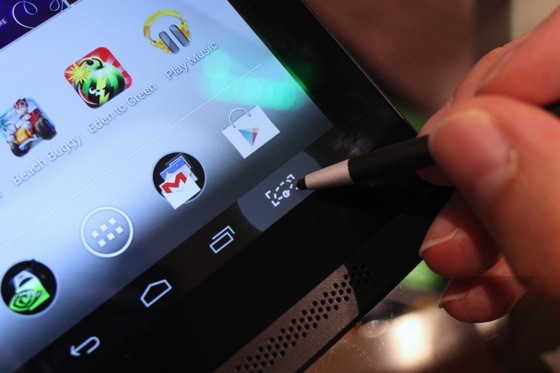 HP calls it the Slate 7 Extreme, and the Tegra 4 tablet offers a variety of features that instantly set it apart from the rest of the pack. First and foremost, it comes with a pull-out stylus pen which offers both exceptionally precise and fluid input, and the ability to literally capture an image of anything you see on screen by drawing a lasso around it. Second, the five-megapixel camera around back uses Nvidia's computational photography engine to take smooth slow motion videos and instantly capture HDR images to better expose light and dark regions. You can even tap on a spot on screen to see a live HDR preview. We also got to try a demo of the Tegra Note's game controller support: the idea is that you can plug the tablet into your TV, then control the entire Android operating system from your couch with any compatible Bluetooth controller.

While the Slate 7 Extreme and its likely $199 price point was the most impressive thing HP had to show, the tablet's comparatively low-res 1280 x 800 screen was easily overshadowed by the new HP Slate 8 Pro. Here, HP's obviously gunning to show up the next iPad mini by offering a beautiful 7.9-inch, high-res 1600 x 1200 display with the same 4:3 aspect ratio as Apple's tablets. The prototype felt fairly thin, light, and reasonably solid, though not nearly as well-put together as the actual iPad mini by a long shot. Still, the Tegra 4 processor inside promises some impressive mobile gaming chops should more developers latch onto the Android platform. Unless you're attached to HP, though, or the price is sufficently low, it'd be hard to see many buying this over a $229 Google Nexus 7 with all it has to offer.

Windows was also in attendance with the company's new Omni 10 slate, which puts Intel's new Bay Trail processors into a 10-inch package with what looked like an excellent 1080p display. The Omni 10 will come with 2GB of RAM, up to 128GB of solid state storage, and an 8-megapixel camera, but only include Wi-Fi connectivity to start. It also requires an ugly barrel connector to charge, has few ports, and there's no obvious way to attach functional accessory docks or physical keyboards. The prototype charging dock we saw, connected only by that barrel jack, was difficult to dock reliably.

Lots of choices, but are any worthwhile?

Last but not least are HP's plays for the disposable Android tablet realm, in the form of the Slate 7 HD and Slate 10 HD. The "HD" name is a bit of a red herring: if you consider 720p to be high definition, they technically qualify, but both are equipped with low-res 1280 x 800 screens. Their stippled plastic backs come in an attractive red and a simple silver, but there's nothing particularly exciting under the hood, just a low-end Marvell PXA986 processor with built in 3G cellular support, front and rear cameras, microSD expansion, and Beats Audio. Hopefully, they're an extremely cheap replacement for the original HP Slate 7, as they don't even have the steel rim that gave that device a touch of class and a sense of solidity.

The company's definitely in the tablet market now, but we're not yet sure it has what it takes to compete. HP says these tablets will all ship sometime in November, but didn't provide prices or firm release dates.