We've already seen images of HTC's rumored 5.9-inch One Max, but new photos from the Chinese social network Sina Weibo help put the enormous smartphone's size in context. Pictured next to Samsung's 5.7-inch Galaxy Note 3, the One Max looks even larger than its 5.9-inch screen would suggest. It was rumored that the One Max will have a 5.9-inch 1080p display, a large 3,300 mAh battery, a Snapdragon 800 processor, and 2GB of RAM, but it now looks as though those specs were incorrect. From benchmark results, it appears it's running the same Snapdragon 600 (a less powerful chip than the 800) as the HTC One. 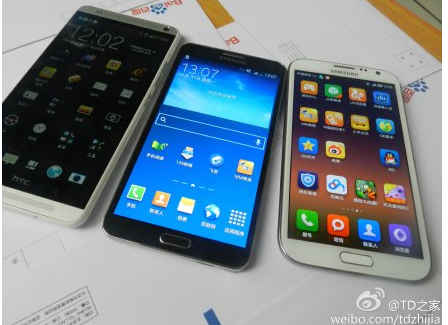 The One Max forgoes its namesakes' high-quality (and more expensive) aluminum construction for a combination of plastic and aluminum, just like the cheaper HTC One mini. Because of the similar chip and cheaper construction, it seems likely that the larger handset will be priced similarly to the HTC One. It was rumored that the One Max would be announced in September, but with October drawing closer, the supposed launch date could be wrong.