Accusations of land grabbing revive debate over "food versus fuel"

Share All sharing options for: Is ethanol starving Africa?

The biofuel industry has enjoyed tremendous growth over the past decade, sparked by the ongoing search for renewable energy sources and government incentives for private sector investment. But ethanol and other biofuels have come under increased criticism in recent years, with some questioning their long-term environmental benefits, and others linking them to far more urgent disasters: food shortages in the world's poorest countries.

ActionAid, a UK-based charity, lashed out at Addax Bioenergy earlier this month, accusing the Swiss company of engaging in a biofuels “land grab” that has diminished food supplies and harmed the livelihoods of locals in the Bombali region of Sierra Leone. Addax took out a 50-year lease on more than 50,000 hectares of land there in 2008, and has since set up a massive sugarcane plantation to produce ethanol for biofuels. The company plans to begin exporting ethanol to Europe by 2014, and aims to provide electricity for around 20 percent of Sierra Leone's national grid.

The Addax Bioenergy Project was the first Africa-based complex to earn certification from the Roundtable on Sustainable Biofuels, but according to ActionAid’s survey of more than 100 local villagers, the investment hasn’t made much of an impact on everyday life. The charity’s report, published on September 3rd, claims that Addax's sugarcane complex has decimated valuable farmland in Sierra Leone, decreasing food production in a region already ravaged by hunger. ActionAid also claims that Addax’s lease contracts were signed without the involvement of local communities, and that a program designed to train farmers on more advanced agricultural techniques has so far resulted in lower crop yields.

Sierra Leone is one of the world's poorest countries, and ranks near the bottom of the Human Development Index. Life expectancy at birth is just 48 years, and only 7 percent of households have access to electricity. According to the Food and Agriculture Organization (FAO), agriculture accounts for 49 percent of Sierra Leone's GDP, and employs around 60 percent of the population.

Addax has vehemently denied ActionAid's allegations, contesting the charity’s methodology, and charging that its motives are rooted in politics rather than reality. The project, the company counters, has injected nearly $52 million into Sierra Leone's economy, and has employed more than 2,000 locals. Addax also contests allegations that leases for its sugarcane plantation were signed without transparency, pointing to yearlong public discussions it held with the land-owning Chiefdom Councils in the area. According to the company, more than 2,000 hectares of community rice fields have been developed under its farmer development program.

"There is evidence that many communities have a better livelihood, more income at household level and more children attending school than before," the company said in an open letter to ActionAid this month. "Communities are prioritized for job opportunities and Addax Bioenergy makes every effort to ensure communities within the area are the first to be recruited for permanent and seasonal employment opportunities." 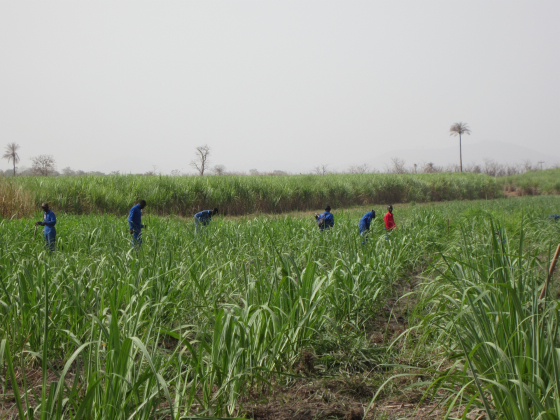 ActionAid isn't the first to levy charges of land grabbing against Addax. A 2011 report from a Swiss non-government organization (NGO) made a similar case, arguing that many farmers had already been pushed off fertile land without due compensation. NGOs such as Oxfam have waged ongoing campaigns against biofuel multinationals in other parts of Africa, as well.

"When Addax visited the area, they promised us schools, boreholes, hospitals because of the chemicals they would be using, and jobs," Ali Bangura, a representative of the Landowners Committee of Makeni, told AFP at the time. "But nothing has materialized since 2008."

“What we’ve seen over the past three or four years is an absolute rush for land,” says Anders Dahlbeck, biofuels policy advisor at ActionAid. “And this has been very much driven by European targets” — a reference to the European Union’s goal of having 10 percent of all transport energy come from renewable sources by the year 2020.

"That land should be used to produce food for locals, not for fuel for European cars."

Last week, the European Parliament passed a preliminary measure to limit the share of food-based biofuel to 6 percent of all transport fuels. The US Environmental Protection Agency is poised to take similar steps, underscoring what some see as a growing uncertainty around the future of biofuels.

"That land should be used to produce food for locals, not to fuel European cars," Dahlbeck argues.

But some experts say that when it comes to biofuels and food security, it’s not an “either-or” question.

"At the moment we have a false dichotomy between biofuels and other forms of land development," says Jeremy Woods, a lecturer at the Centre for Environmental Policy at Imperial College London and co-author of a 2011 paper that argued in favor of biofuels as a means of enhancing food security in Africa.

"A lot of this dichotomy is led by the perspective of 'food versus fuel', whereas when you actually look at the data, it’s very difficult to find any evidence of food versus fuel at almost any scale,” Woods tells The Verge, noting that traditional agriculture continues to drive most demand for large-scale land acquisitions across the globe.

"Ideological arguments are a poor substitute for building land-management capacity."

Dr. Calestous Juma, a professor of international development at the Harvard Kennedy School, adds that the current debate surrounding biofuels has become too polarized and abstract, oversimplifying what, at its core, is a very complex issue.

In an email to The Verge, Juma said that biofuels have become "scapegoats in political battles," while acknowledging that they are "grossly overrated as a sustainable pathway to development." In his view, biofuels shouldn't be decoupled from traditional agriculture because they both require the same infrastructure and strong governance — both of which are far more critical to food security than ethanol or other biofuels.

"Much of the reaction from NGOs has been more rhetorical than it has been helpful to African governments," Juma says. "Ideological arguments are a poor substitute for building land-management capacity."