Apple’s next generation of iPhones are upon us and iFixit has wasted no time tearing apart the new gold 5S. Cosmetically, there might not be a whole lot to separate the new device from last year’s model, but Apple’s packing a whole host of changes under the hood, from the new A7 system on a chip to the M7 coprocessor to the Touch ID fingerprint authentication hardware, all of which are making their big debut.

Right off the bat iFixit notes that there's a new design wrinkle: a cable connects the Touch ID sensor on the phone's home button to the Lightning connecter assembly, a tweak that will force do-it-yourselfers to exercise a little extra caution when taking apart their own devices. Digging into the phone's internals, it also becomes clear why Apple is able to boast 10 hours of talk time: the iPhone 5S has a larger battery than its predecessor. The teardown reveals a 1560mAh battery, an improvement over the 1440mAh battery in the iPhone 5. As iFixit points out, Samsung's Galaxy S4 features a significantly larger 2600mAh battery, but that's rated at just 7 hours of talk time. 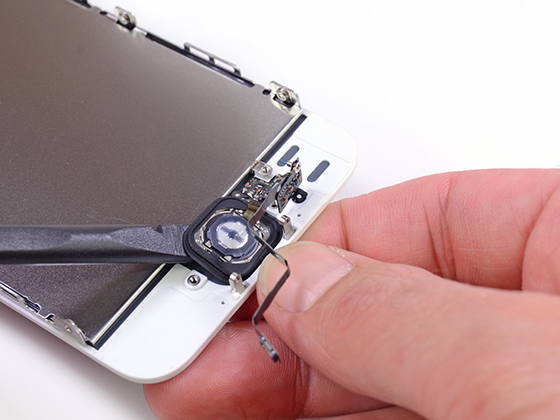 Looking at the A7 SoC itself, iFixit writes that the markings "F8164A1PD" correspond with a part number from DRAM manufacturer Elpida (linked in a MacRumors forum post), indicating that Apple's A7 likely has the same 1GB of RAM found in the iPhone 5's A6 chip. (Earlier this week, Anandtech reported that the new phone does have 1GB of RAM.)

On the connectivity side of things, iFixit notes that the new phone uses a Murata Wi-Fi module that "most likely" houses a Broadcom BCM4334 radio. This would also confirm Anandtech's report that the 5S will not support the latest Wi-Fi standard, 802.11ac. The team also gets a look at the Touch ID sensor as well as the rear-facing iSight camera, and while some of the markings on the camera module do differ from previous generation phones, according to Chipworks it is still made by Sony, just like the iPhone 5's camera. As usual, iFixit is diving down into the most nuanced of details, so if you'd like to get a complete look at how Apple's latest flagship is put together, be sure to check out the teardown in its entirety.