64-year-old swimmer Diana Nyad is nearing the end of a 103-mile-long swim from Cuba to Florida — and you can follow the events live on her site. If successful, the accomplishment would make Nyad the first person to make the journey without the aid of a shark cage. The current attempt is Nyad's fifth so far — last August she was forced to cut her swim short due to a combination of jellyfish stings and bad weather. This time around Nyad has a protective silicon mask designed to protect her face from stings. "The mask is tough to swim in," she says. Her current attempt kicked off on August 31st, and she's managed to make it further than any of her previous attempt thus far. 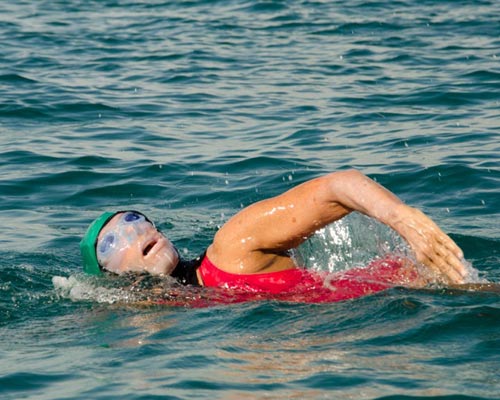 Provided everything goes smoothly, she's expected to arrive in Florida sometime between 2-4 PM EST, after swimming for more than 50 hours. You can follow her progress with an interactive map on her site, as well as regular blog posts about what's going on at any given moment. At 10 AM this morning, for instance, the team spotted its first box jellyfish of the trip. According to doctors, Nyad currently has a swollen tongue and lips. And while they're concerned about potential issues with her airways, and her speech is a bit slurred at the moment, they haven't intervened yet.

Update: She did it! Nyad completed the estimated 110-mile swim from Cuba to Florida shortly before 2PM ET.