Microsoft looks to Apple and Google to reinvent itself

Microsoft looks to Apple and Google to reinvent itself

Less 'One Microsoft' and more 'Redmond vs. the world'

Microsoft announced a massive company-wide reorganization earlier this year, and now it's starting to reveal exactly how that will impact its businesses going forward. During a meeting with financial analysts yesterday, Microsoft CFO Amy Hood detailed how the software maker is moving from its traditional model to a new one based on devices and services. Previously, Microsoft has always generated most of its money through licensing software on PCs. In the future, Microsoft wants to make money through selling devices, advertising, cloud-based subscriptions, and its traditional licensing models. If it all sounds like a mix of Apple, Google, and Microsoft, that's because it is.

"We have a lot of opportunity with this new model," explains Hood. "We're creating economic value by doing it." Microsoft simplifies it down to three key areas that overlap: devices, enterprise services, and consumer services. On the devices side, Microsoft will sell its own hardware like Xbox One, Surface, and a range of Windows Phones soon thanks to the Nokia acquisition. Taking profits directly from owning the software and hardware combination is how Apple has generated vast sums through the iPod, iPhone, and iPad. It’s an Apple strategy that Microsoft is envious of. "Everybody is trying to adopt Apple's strategy," said Apple CEO Tim Cook in a recent interview discussing Microsoft's Nokia plans. 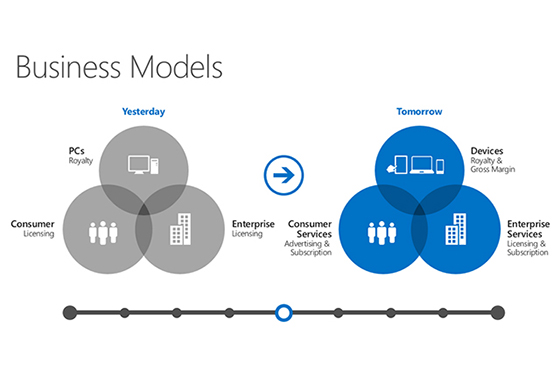 Microsoft wants a piece of the device market, but it has struggled so far

While Microsoft dominates the traditional PC market, it sees the profits made by others who build their own software on top of tablets and phones. "The PC was a new user interface and a new form factor. And Intel and Microsoft made a lot of money," explains Microsoft CEO Steve Ballmer. "If you will, touch and low power were huge changes in the way the user interface paradigm worked. And Apple and Samsung and Qualcomm made a huge amount of money." Those shifts aren't finished, and in a world where PC makers are increasingly moving to Android for tablets, Microsoft wants a piece of the device market to replace the revenue it may miss out on.

However, Xbox hasn’t been hugely profitable for the company, its Zune music player struggled to compete with the iPod before getting axed, and the Kin phones flopped after just weeks. Surface has been a slow starter so far, and Microsoft has taken a $900 million hit on it. Microsoft’s devices work will have to be a lot stronger, especially with Nokia’s struggling phones unit joining the mix.

Bundling Windows with its own devices means the company needs to be competitive on hardware prices, so it’s also looking for other ways to generate money from consumers and businesses. Two areas that Microsoft is focused on for the future are advertising and consumer services. While that's a model that Google is primarily associated with, Microsoft clearly feels there's some money to be made. Subscription services like Office 365 Home Premium and Xbox Live proved popular, and Microsoft has been attempting to convince SkyDrive and Skype users to pay for additional benefits.

Google's ad revenue is also an appealing target for Microsoft. Services like Outlook.com have 400 million users, but charging users for premium features or placing ads on pages is a tricky balance. Some built-in Windows 8 apps already have ads, and Microsoft has been experimenting with a variety of different ads on Xbox Live. These are a minor part of the company's revenue compared to the overall search business, and Microsoft is looking to use Bing as a way to improve its search advertising business and its own offerings. For instance, Microsoft is integrating Bing and the search experience into Siri on iOS 7, Windows 8.1, and Windows Phone. Microsoft's approach here is an aggressive and bold way to take on Google directly, but it will have to rely on its other services to work alongside one another if it really wants to catch up. 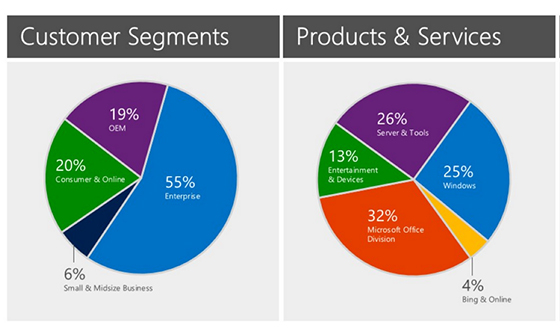 "Consumer services, as we say, are tough."

However, generating money through ads or subscriptions won't be easy, and Microsoft knows it. There's a lot of competition from smaller companies and startups, and then there's Google. "Consumer services, as we say, are tough," admits Microsoft CEO Steve Ballmer. "Other than phone companies, there really aren't many technology [and] large subscription consumer services, and outside of Google and maybe Facebook it is hard to find a business that is significant that is ad-funded."

The final area of Microsoft's focus is the enterprise. More than 55 percent of Microsoft's business comes from the enterprise, so it remains a key market. Microsoft plans to convince big businesses to switch to subscription models for its new cloud-based offerings, and at the same time continue licensing software. "It's quite clear to me that by this time next year we will overwhelmingly have the most popular paid service in the enterprise, bar none, and we will have an engine ... with Office 365 to which we can attach new services and new options," says Ballmer.

Ballmer's hoping for a bright Microsoft future, even when he's gone

The key to Microsoft's success with this new model is balancing the demands of the enterprise while trying to secure a grip on the consumer side. "The old world, we can dream about doing thousands of things in a very small way," says Ballmer. In Microsoft's new world, Ballmer wants to set the company up to focus more. "What I would probably tell you is we can do fewer things than we could have dreamed about in the old world, but we should be able to do them more successfully by training everybody in the organization of those things." Ballmer won't be CEO for long enough to see if his reorganization works, but he's certainly hoping it will. "My greatest desire will be to see the company be so much more successful four or five years from now than it is today."