My Asics app runs the numbers to make you faster

My Asics app runs the numbers to make you faster

The fitness app market is crowded. The most popular ones do a great job of logging your performance and connecting you with friends, but what if you want to shave 20 minutes off your half marathon time? One standout is My Asics, from the running shoe maker of the same name. Its adaptive training programs boil seven years of research down to a formula that anyone can use to improve their conditioning. With its latest update for iOS and Android, My Asics is bringing (nearly) the full power of its web app to mobile, letting you sign up for and manage your training plan entirely from your phone. The promise isn't just a personalized training plan, it's that the app can find the optimal length and distance for your workouts based on your current ability, constantly tweaking parameters to find the best fit. It’s a stats nerd’s dream approach to training. 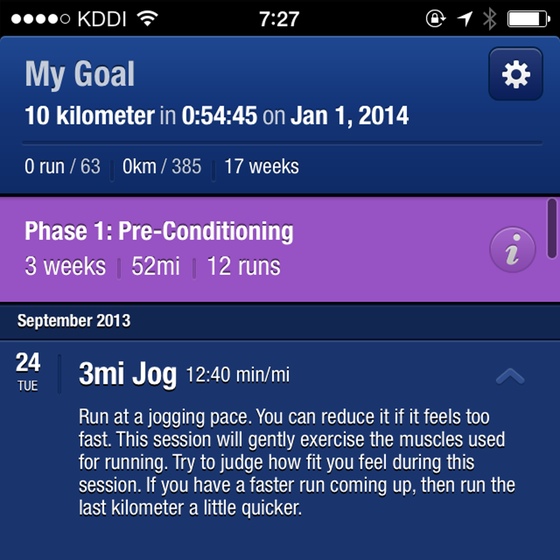 "This whole quantified self movement only tells you where you are, not where you’re going," says project lead Alex Mrvaljevich. Unlike its best known competitors, starting a new plan in My Asics begins with you filling in your best race time and target. A split second later it comes back with an optimized personal training program (never more than four runs a week) along with your forecasted speed at the end of the training. The goal is realistic: when I told the app that I wanted to run the 10K five minutes faster, it told me that I’d only be able to drop about two minutes by the new year. I’ve only used it for a couple of days, but I already know that having that goal time in front of my face every time I open the app is going to be a huge motivation to hit (and beat) the target.

My Asics constantly adapts to your performance

Speaking of beating the target, My Asics constantly adapts to your performance, pushing you harder if you improve faster than it expected. Alex explained to me that if you complete two runs faster than the projected pace, you’ll be asked if you want to increase the intensity of your workouts, or vice versa. That doesn’t mean you can just go out and crush your slow days and expect to get bumped up, though — only your real workout days count.

"Once your glycogen is gone, that’s as far as you go."

"The whole program is designed to increase your anaerobic threshold," I'm told, as I hear about the difference between our bodies’ endurance and sprinting systems. With 15 years of work already invested in these adaptive training principles, Asics is confident that it can make me faster, and Alex points to over 500,000 runs logged and a 91 percent success rate among marathoners — better than I would expect for people already logging a lot of miles.

As a longtime user of competing apps, I’ve been feeling disappointed with the lackluster training programs and unreliable data storage. So far, My Asics doesn’t offer one important feature of my go-to app, RunKeeper, which is the ability to reschedule runs from your phone, but Alex says it should be added by the end of the year. There's also no way to switch units to kilometers, or to post your runs to Twitter, which could be important considerations. That said, the simple interface and stats-based approach to training have made it my first choice for logging those mornings on the road. If you’re intrigued, Version 2.0 of My Asics is free to download, and available now for iOS and Android.