That, more than anything, is the message of the iPhone 5C. In previous years, the arrival of a new iPhone was accompanied by the low-key repositioning of the previous model at a lower price tier — a strategy that allowed Apple to sell $99 iPhones, but didn’t allow the company to advertise them as new, interesting products. The old models sat with quiet pride in the corner of the Apple Store as people flocked in to see the latest magic from Cupertino, heralded by no banner except that of glories past.

That’s all changed with the 5C. It is less a new product than it is a vibrant reminder that Apple has the best marketing team in the business; the formerly staid and serious iPhone 5 all dressed up in a shiny new plastic suit and a thousand-watt smile, ready for a reintroduction alongside the more radically updated iPhone 5S.

And that reintroduction is critically important for Apple — it allows the company to advertise and promote the 5C and 5S as peers, members of a product family that stretches across price points. Last year a smartphone buyer with $99 to spend was quietly directed to Apple’s leftovers, but this year a bright pop of colorful marketing will lead them to what appears to be very new and very different. It’s already starting: Apple’s home page right now features the 5C, not the 5S, and the 5C is first in the new line of TV ads. What’s new enough is new again.

So really, that C doesn’t stand for “color,” or “cheap,” or even “cynically repackaged.” It stands for “communication.” With the iPhone 5C, Apple’s giving itself another opportunity to talk to you. Is it worth listening?

The 5C is about color, first and foremost. It comes in green, blue, yellow, pink, and white, a palette that feels very inspired by what Nokia’s been doing on the Lumia series of handsets for a while. 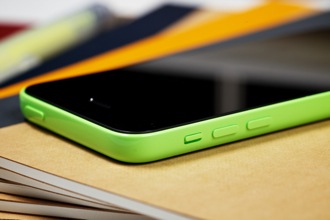 The 5C is for new iPhone owners, not existing ones

The glossy finish attracts fingerprints but otherwise feels lasting and deep; even the volume controls, mute button, and sleep / wake switch are the same color, giving the phone an interesting semi-monochrome look that strikingly frames the black of the display. Inside, a steel frame serves as both the antenna and structural support; the 5C feels much more solidly built than other plastic phones like the Galaxy S4 and the LG G2.

If you’re used to an iPhone 5, the 5C won’t blow you away when you hold it: it’s a little bigger all around and a little heavier, and there’s none of the precision machining or premium materials that are now reserved for the 5S. It’s just another reminder that the 5C is designed for new iPhone owners, not existing ones: last year Apple made a big deal about not radically changing the iPhone 5’s design because people have lasting and deep relationships with their phones, but the 5C abandons all that for something new. It’s nice, but it’s definitely not as nice as the iPhone 5 or 5S. 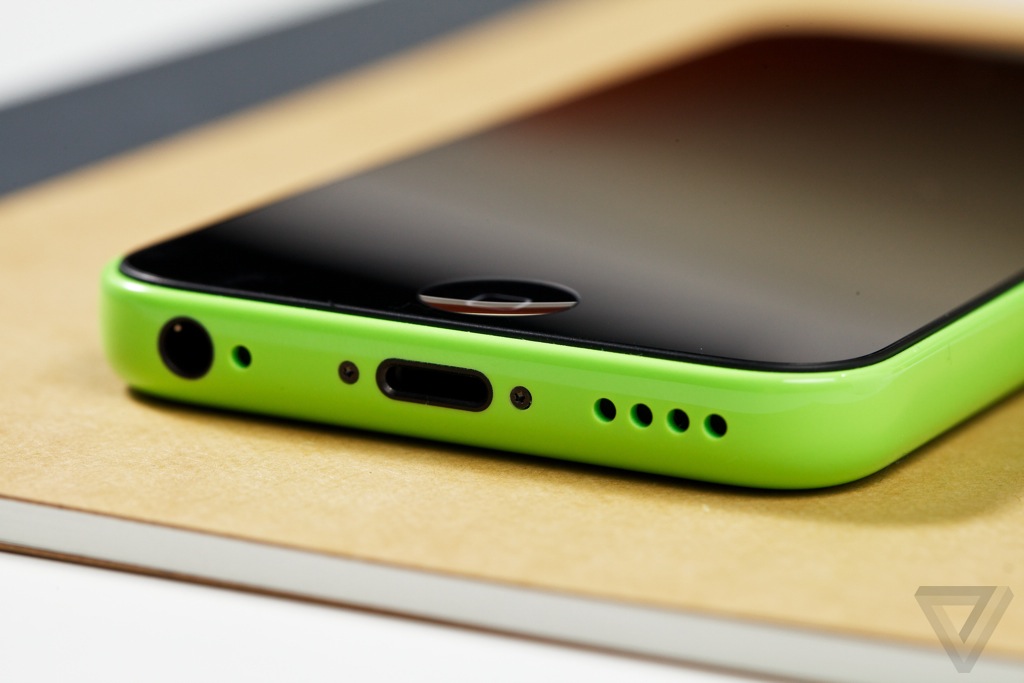 Like the 5S, the iPhone 5C features the same terrific 4-inch Retina display as the iPhone 5. Apple’s displays are still at the front of the pack in terms of quality, but when it comes to size they’re quickly falling behind as competitors race to build ever-bigger devices. Even a slightly bigger display like the 4.7-inch panel on the Moto X or HTC One would be welcome; the X in particular remains a perfectly sized phone even with a larger (albeit lower-quality) screen.

In terms of cameras, there’s nothing really new to report. The FaceTime camera up front now takes 1.2-megapixel images and has improved low-light abilities for those all-important nightclub selfies, while the rear camera is the same excellent 8-megapixel shooter from the iPhone 5. It remains a great camera; the 5C continues to take some of the best photos of any phone on the market save the iPhone 5S and the Lumia 1020. And the new camera app in iOS 7 is far faster, more responsive, and includes the ability to take square photos with real-time filter previews. Take that, Instagram.

Actually, let’s talk about iOS 7 for a moment. 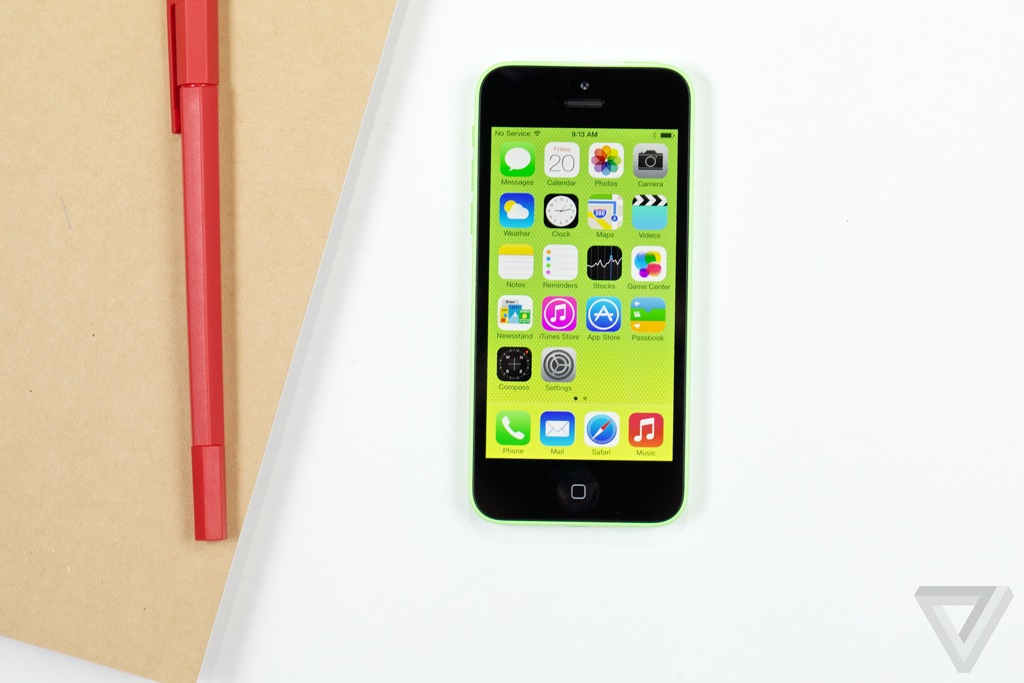 If we lived our lives in the movies, everyone would carry an iPhone 5C, and everyone would love iOS 7. Everything about Apple’s new mobile operating system seems perfectly matched to the 5C, and everything is perfectly dramatic — the background out of the box is color-coordinated, the expressive animations that accompany every action are just as bright and eager as the phone’s design, and the entire package exudes happiness and light.

But I would argue that iOS 7 is perhaps too dramatic, and perhaps slightly unfinished. All those swooping and zooming animations get a little old after a while, and I would love some way to speed them up. The new notification shade offers a stunning translucent effect, but managing notifications is still as opaque and confusing as ever. And I don’t even want to talk about the new Safari icon. iOS remains an excellent and effective operating system, but there’s still work here to be done.

If you’re interested in all the details, check out our full review of iOS 7. 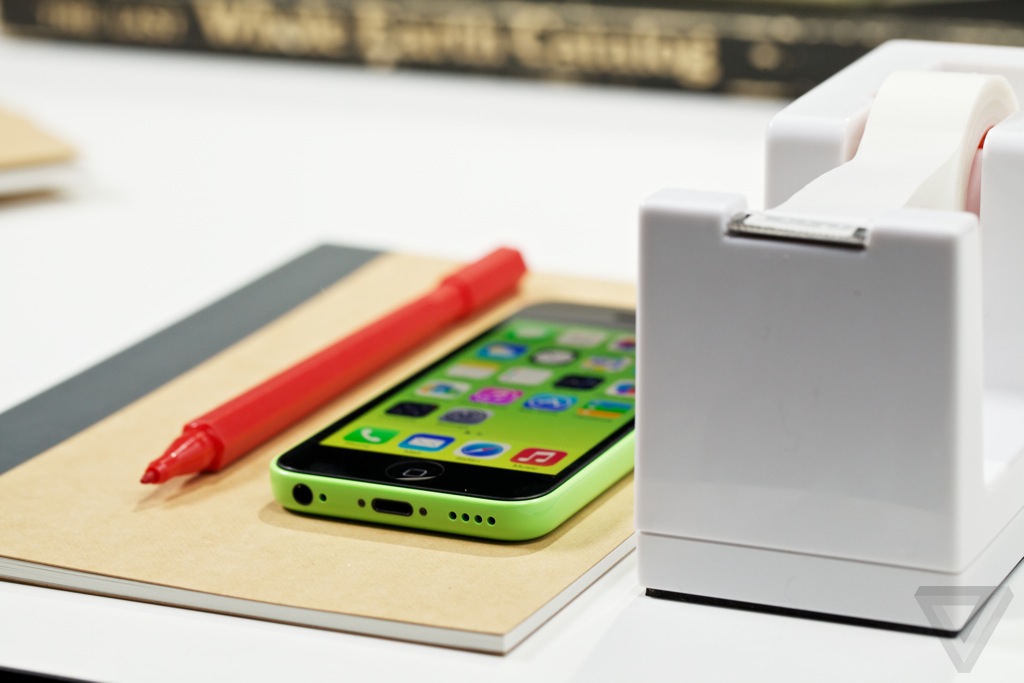 For over a decade, the most persistent criticism of Apple has been that the company’s power comes not from invention, but from marketing — that millions of customers are buying into a logo and a lifestyle more than radically new products. There is an element of truth to this: MP3 players certainly existed before the iPod, and smartphones were around long before the iPhone. But where the criticism falls short is that Apple’s overwhelming marketing prowess has traditionally been matched by breathtaking innovation: the iPod and iTunes revolutionized the music industry. The iPhone upset the entire balance of mobile. The iPad is slowly crushing the traditional PC business to death. No marketing strategy alone can achieve any of that.

But the iPhone 5C offers no such revolution. It is entirely about marketing — it lets people buy into the mystique of owning the latest Apple product without having to pay the traditional Apple price. It’s the first time since the heyday of the iPod that Apple has put its advertising muscle behind something other than the state of the art, and for that reason alone it is a fascinating product.

Happily, wrapping the iPhone 5 in a shiny new case still makes for a pretty good product as well: if you’re buying on contract, the 5C is easily the best $99 phone you can buy, and with various carrier and retail promotions you can even get it free. That’s a whole new world for Apple’s crack marketing team to attack, and attack they will — there’s been a $99 iPhone since 2009, but Apple hasn’t been able to say anything about it. Now it’s not going to shut up.

Things are less obvious off-contract at $549: the terrific HTC One Google Play Edition is just $50 more at $599, and you’ll almost certainly be able to pick up a refurbished iPhone 5 on the cheap very soon, which will offer the exact same performance in a much nicer package. And an off-contract iPhone 5S starts at $649 — a huge upgrade for 18 percent more money.

But most people will buy the iPhone 5C on contract, and that’s where Apple seems intent on focusing all that marketing effort. And for a lot of people, it’s going to work out just fine. You might have some issues with this first iteration of iOS 7, and you might wish you’d bought a different color in a few months, but everything else about the 5C succeeds in bringing Apple’s message of care and quality to a new segment of the market.

Turns out a little color and a little communication are extremely effective.

More from this stream iPhone 5S and 5C: Apple battles Android with a colorful new pair of smartphones