Spec Sheet: does BlackBerry go big enough with the Z30?

Share All sharing options for: Spec Sheet: does BlackBerry go big enough with the Z30?

It seems that just about every smartphone manufacturer has learned that bigger is better when it comes to screen sizes. That may not be true from a strict usability standpoint, but as for how flashy a device looks in a showroom, larger displays seem to play a big part in a winning formula. So for BlackBerry, which badly needs a winner if it wants to stay in the modern smartphone race at all, jumping up to a 5-inch display might just be a no-brainer. 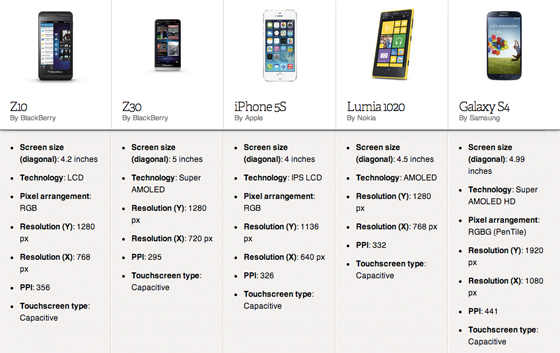 BlackBerry’s latest smartphone, the Z30, will replace January’s Z10 as the company’s flagship device when it hits stores internationally next week. And the Z30 isn’t just bigger: it’s more powerful, and comes with a massively higher capacity battery.

A mid-range device at heart

But that may be far from enough to really sell the Z30. Though its software improvements should be fairly helpful, there’s still a lot of catch-up that needs to happen. And while the new phone may not be lacking on specs, it isn’t blowing anyone away either at a time when even the companies that have traditionally been least interested in specs are talking them up.

When compared side-by-side with top devices on other platforms, the Z30 doesn’t exactly shine in the areas it needs to either. Its display may have blown up, but its resolution hasn’t. With only 295 PPI, it falls short of even its predecessor — not to mention both the Lumia 1020 and the iPhone 5S, which aren’t even the market leaders. That larger screen also makes it the tallest of the bunch — towering just slightly over the Galaxy S4, which trims down thanks to its narrow bezel. BlackBerry's new device is on the thicker side of things too.

The Z30’s camera appears to remain similar to the Z10’s, with 8 megapixels on its sensor. Its predecessor was good — but certainly not great — when it came to photos, and the Z30 will find itself among an even tougher crowd. Nokia, Samsung, and Apple have all drawn attention to their flagship devices' cameras in one way or another, and all can easily serve as a great point-and-shoot replacement. While we haven't seen any shots from the Z30 yet, it'll need to have improved to keep up with the best phones around.

Can battery and reception make a big difference?

BlackBerry’s been smart enough to focus on other areas where it might be stronger though. It says that the Z30's enormous battery will last for 25 hours with "mixed use," and that its new antenna technology should provide better connection, faster data speeds, and fewer dropped calls in low signal areas — all features that could be pretty meaningful for the long commuter or for the enterprise customer that’s traditionally been part of BlackBerry’s core demographic.

The future of BlackBerry’s smartphones has never been more uncertain, and the Z30 may find itself bearing a heavier weight than it can realistically handle. Even after today’s layoffs, BlackBerry still says that there’s a place for its smartphone lineup, with two devices at the high-end, and two devices at the low-end. It’s clear where the Z30 fits in — now it’s time to see if BlackBerry can sell it to the professional customers it’s looking for.

There were a lot of other additions to the database this week — here are some of the highlights:

If you want to learn more about any of the products mentioned above, all of our information on them can be found through the database box located beneath the article. For more on cellphones, headphones, and just about every product around, you can check out the full Verge Database right here.