A new Nokia Lumia Windows Phone is heading to Verizon before the end of the year. Twitter account Evleaks has posted a press photo of what is described as the Lumia 929 for Verizon. Sources familiar with Nokia's plans have revealed to The Verge that the Lumia 929 will debut on Verizon before the end of the year. The leaked photo shows what appears to be a large-screen Windows Phone with a 1080p display. A white version of the same device leaked earlier this month, with a 20-megapixel camera and PureView branding. 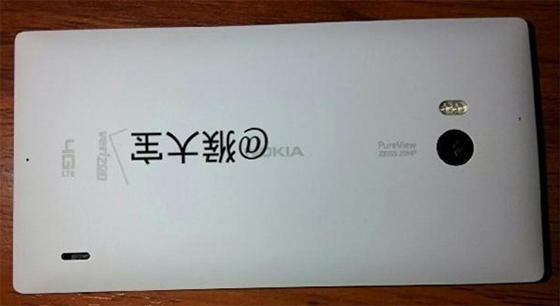 We understand that the device is a variant of Nokia's upcoming Lumia 1520. However, we're told Nokia's Lumia 929 won't have the same giant 6-inch display, but it will be 1080p resolution. Little else is known about the Lumia 929, but it's due to ship in white and black editions. Nokia is holding a special press event on October 22nd where it's expected to launch a 6-inch Lumia 1520 Windows Phone and a 10.1-inch Lumia 2520 Windows RT tablet. Nokia's Lumia 929 recently passed through FCC certification in the US, so we should be hearing a lot more about it shortly.

Update: a render of the rear of the Lumia 929 has also leaked, confirming the 20-megapixel camera.