Share All sharing options for: Can DARPA spark a DIY brain-scanning movement?

A working prototype of a low-cost electroencephalography device funded by the US Defense Advanced Research Projects Agency (DARPA) made its debut in New York this weekend, the first step in the agency’s effort to jumpstart a do-it-yourself revolution in neuroscience.

Dr. Lindsay Allen was sitting in a booth at Maker Faire, the annual gathering where 70,000-some hackers and tinkerers display their projects, wearing a blue cap stuffed with electrodes. Her brain’s electrical signals were feeding into a green chip the size of a baseball card mounted atop an inexpensive Arduino microcontroller, which was outputting through some software built for the demonstration. Beside her, a laptop streamed a chart of her brainwaves, which spiked and settled as she opened and closed her eyes.

"Once you can control the computer with your brain, then you can do almost anything."

Dr. Allen is an engineer for Creare, one of the companies DARPA has contracted with, and she was hooked up to OpenBCI, an open source device built to capture signals from eight electrodes at a time. OpenBCI was built by Creare and biofeedback scientist Joel Murphy, and the prototype was finished only two weeks ago. It’s rudimentary, but the project is actually ahead of schedule: DARPA isn’t requiring the companies to have a prototype until after the second phase of the program starts in December.

There are some products like those in the Neurosky lineup, which range from $99 to $130. But most neural monitoring tools are relatively expensive and proprietary, the OpenBCI team explained, which makes it tough for the casual scientist, hacker, or artist to play with EEG. If neural monitoring were cheap and open, we’d start to see more science experiments, art projects, mind-controlled video games, and even serious research using brainwaves. You could use an at-home EEG to create a brain-powered keyboard, for example, Dr. Allen said, and learn how to type with your mind.

OpenBCI is not quite cheap enough yet, but the team feels confident that they’re heading in the right direction. Murphy hopes to crowdfund the device on Kickstarter in order to start producing them en masse. "Once you can control the computer with your brain, then you can do almost anything," he says. "Brain control of everything." 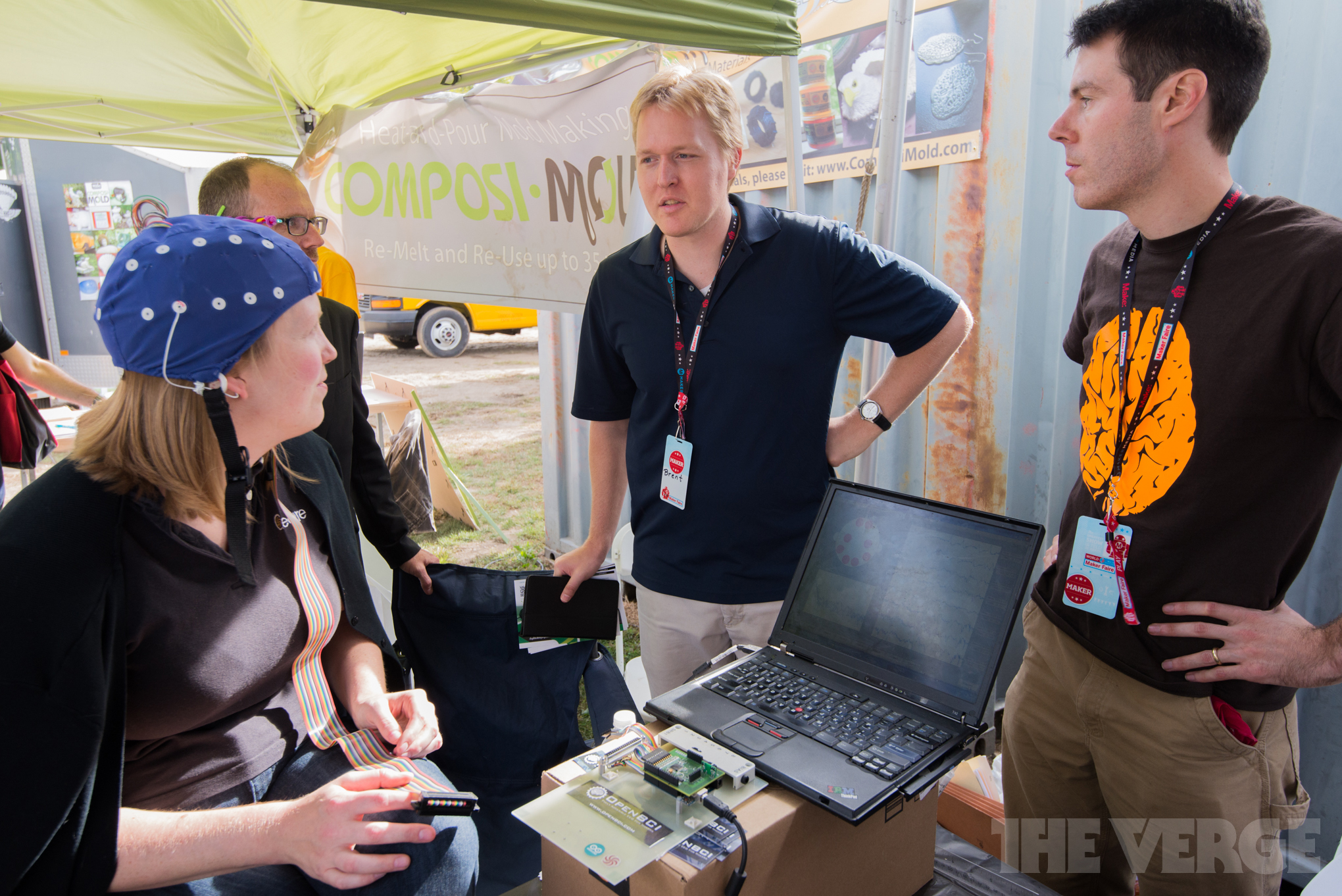 Dr. Bill Casebeer, a DARPA program manager, is hoping to spark a neuroscience fad within the maker movement. OpenBCI is just one of four EEG projects that were funded by DARPA in June. Design Interactive is developing a headset using off-the-shelf parts, along with software that can work on a phone or tablet. Boston-based S12 is working on designing electrodes that can be 3D printed. And Cognionics, which makes Bluetooth-powered wireless biolectric sensors, is also developing a low-cost portable version of its EEG equipment.

Dr. Casebeer’s goal is to return to Maker Faire next year with an ultra simple electroencephalography device for less than $30 that would allow anyone to take research-grade measurements of their own brain. "We need simpler methods," he says. "There’s an entire community here of hobbyists, citizen scientists, and makers… who would be willing to engage in neuroscience."

There are a lot of reasons why DARPA wants to crowdsouce brainwave research. The data can be used to refine soldier training, treat post-traumatic stress disorder, study the effects of torture, triage medical diagnoses on the battlefield, harness the human subconscious to detect threats with 91 percent accuracy, and who knows what else. "DARPA’s mission is to prevent technological surprise for the United States and to create technological surprise for its adversaries," the agency said in its request for proposals.

It could also be used for dance parties. "I can’t wait to plug this thing in to drive some disco lights in my living room," said Creare engineer Chip Audette.