US House members overwhelmingly use iPhones over BlackBerry or Android

Share All sharing options for: US House members overwhelmingly use iPhones over BlackBerry or Android

No doubt capitalizing on the launch of the new iPhone 5S, NBC polled the US House of Representatives to ask a simple question: what kind of smartphone do you use? The results are that they overwhelmingly prefer the iPhone, to the tune of 58 percent. The runner-up is, unsurprisingly, BlackBerry at 23 percent, while Android is a very distant third at four percent. There's a small difference between Republicans and Democrats, with the former using iOS slightly more and the latter using BlackBerry at higher rates.

Android's very poor showing amongst House members could be due to a variety of factors — including questions about security and the cold, hard facts of congressional demographics. Whatever the reason, Congress is not in step with the rest of the country, where Android's marketshare is obviously much, much higher. Perhaps the platform will be a future beneficiary of a BlackBerry exodus given that company's recent disastrous news and subsequent decision to focus on the enterprise.

NBC says that it surveyed congress over a two-week period and received responses from 88 percent of members. Comments regarding Congress finally being able to agree on something, political bias, and whether or not House members enjoy video poker as much as their Senate counterparts are left as an exercise for the reader. 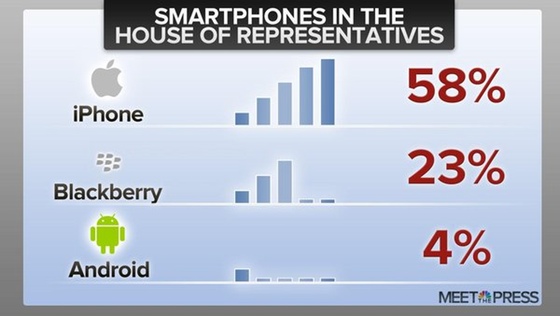