Microsoft has big plans for the Surface, its Touch Cover, and all those new sensors, but only one crazy new idea is actually on display today at the company's event in New York City. That's the Surface Remix Project, which is part modified Touch Cover and part Garage Band-style DJ app. It's a simple, fun tool to play with, letting you create your own customizable controller, chop up your MP3s, and spin to your heart's content.

Avicii I am not (even with the Remix Project's help), but I was easily layering screaming Linkin Park vocals over a booming kick drum in no time. The Remix Project Cover, with 16 numbered buttons, three sliders, and eight keys for volume and control, is impressive — it was fast and responsive, even as I slid up and down on the sliders. Part of that is no doubt due to the Surface 2 attached to it (the Cover also works with the Surface Pro and Surface Pro 2, but not Surface RT), which is itself much faster than its previous iteration. The app is barebones, black and green and gray, but makes splitting stems and mixing tracks really easy.

Microsoft won't say when the Remix Project will be on sale, or how much it'll cost. The company's working with both pro and amateur DJs to seed the kit, and plans to see how the response and feedback is before the product becomes widely available. Based on our experience it's a really fun, Traktor-style accessory that's going to make at least a few people think they're the new house-party DJ to beat. 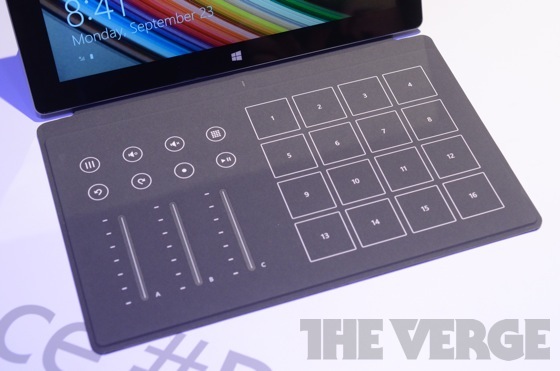 All the news from Microsoft's Surface 2 event