Not everyone has the talent or the tools necessary to rock out over a beautiful, blaring amp, but with amp legend Marshall's latest speaker, you'll be able to blast out all of your favorite tracks on something that looks just as good. Marshall's new Stanmore wireless speaker has a distinctly retro design that calls back to the company's classic amp heads, with a textured black body, a fretted front grill, and even analog knobs on top to control it all. 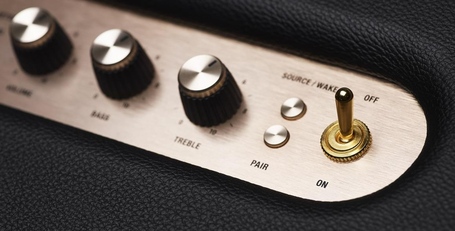 Though you'll need to control the speaker's settings the old fashioned way, getting music to play over it is anything but: the Stanmore supports input from Bluetooth, headphone and RCA connectors, and optical audio as well. It even includes a coiled, double-sided headphone cable that looks just like a shrunken down version of what would traditionally hook into a guitar. The speaker is available beginning today for $400, and if you're in the European Union, there's an additional option for a creamy white colored set.

This isn't Marshall's first foray back into its design trove, however. Marshall previously released the Hanwell speaker, a similarly designed set that came in at a much larger size and with twice the price. Though the larger set doesn't include Bluetooth, it makes up for it by way of sound quality, where it should be a lot more capable than its smaller sibling.