Adobe’s Elements apps have always had a bit of an identity crisis. On the one hand, they’re powerful image and video editors that amateurs can make do with if they don’t want to spring for Adobe’s professional Creative Suite apps. At the same time, they’re the more sophisticated Mom- and Dad-friendly alternative to built-in apps like Apple’s iMovie and Microsoft’s Photos. Today, Adobe is announcing Photoshop Elements 12 and Premiere Elements 12, its latest installments in the series, and while there’s not a lot to make us stand up and take notice, there are some nice improvements. And if you've been holding out hope that Photoshop Elements would add enough features to become your main image editor, you should know that you're still just as likely to bump up against its artificial boundaries.

First, Photoshop. If you’ve used the Elements apps in the past, the dual Editor and Organizer windows are more or less untouched, with the exception of a new Mobile Albums tab in the latter. The function works with Adobe’s Revel online service, and lets you sync images (and edits) between your computer and mobile devices. While PSE 11 let you export to (and import from) Revel, the new version has a much simpler implementation. We're still waiting for Lightoom on the iPad, but the mobile albums in Elements work as advertised, and you get 50 uploads per month for free or unlimited storage for $4.99 a month. 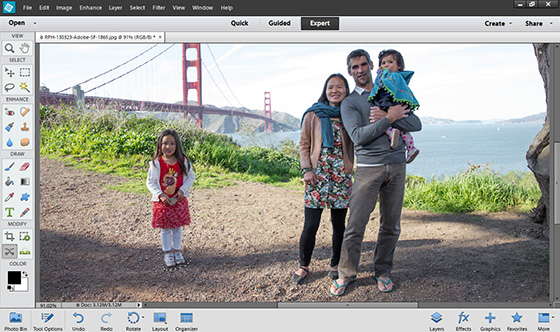 Content Aware Fill is maddeningly only available when straightening images

Turning to photo editing, the biggest feature this time around is Content Aware Move, which works more or less the same way it does in Adobe’s higher-priced Photoshop CS apps. You can make a quick selection with the lasso tool to grab part of the image (like an uncooperative child, above) and drag it somewhere else within the frame.

PSE 12 also marks a significant Content Aware Fill addition to the product. One of the biggest additions of 2010's Photoshop CS 5, Content Aware Fill fills empty space in images, which can be useful for removing distracting elements or, critically, for increasing the size of an image without losing resolution. It's been available since Elements 9 in the Healing Brush and Photomerge Panorama features, and now with Photoshop Elements 12 it's also available when straightening images. However, there's still no way to just increase the size of the canvas and fill in the empty space with Adobe magic — a maddening shortcoming given the feature's age. There’s also a Pet Eye feature (red eye reduction for pets) and something called Auto Smart Tone, which tries to figure out how you like your images to look based on the adjustments you make over time. 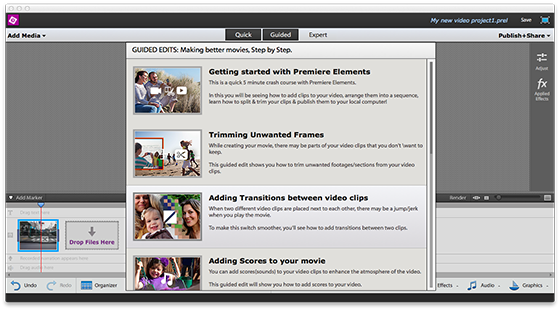 For Premiere Elements, the biggest change is the addition of guided edits. Already available in Photoshop Elements, guided edits build tutorials into the editor, letting you select from a list of common tasks (from cutting unwanted frames to adding a soundtrack) and get guided step-by-step through the editing window. It’s definitely easier than flipping back and forth to a help page and a nice addition, although there are only nine tutorials to choose from.

Some other new features are the aforementioned Auto Smart Tone, which learns how you like your video to look and edits the tone and exposure automatically; and motion tracking, which lets you add rudimentary motion graphics, although you’re limited to things like clown hats and Ka-Boom bubbles. If you want to add a simple Helvetica text box, you’ll have to step up to Adobe’s pro apps.

You're constantly reminded of arbitrary roadblocks

And that’s still the biggest problem with the Elements apps: you're constantly reminded of arbitrary roadblocks stopping you from doing what you want. With other low-cost image editors like Pixelmator and Acorn, you at least feel like the developers have done their best to build a full-featured piece of software, and even if they don’t replicate all the features of Photoshop CC, they’re honest and predictable. The same can’t be said for the Elements suite, which, for example, doesn’t let you work with layers if you’re using 16-bit images, or use Content Aware Fill outside of the straighten tool, but will happily turn your photo into a jigsaw puzzle.

You’d be well advised to give the competition a look

All in all, there’s a lot to like in Adobe’s latest updates to its budget apps. Their integration with the Revel photo hosting service make it easy to sync albums between your computer and mobile devices, and there are some genuinely handy new editing features. But if you’re looking for something fast and robust, you’d be well advised to give the competition a look before you make a decision, particularly considering the price tag: each of the Elements apps costs $99.99, particularly high given the crowded field of lower-priced photo editing apps on the Mac. Nevertheless, if the combination of a familiar interface and built-in tutorials sound right to you, both are available now directly from Adobe.