Surface blades: Microsoft bets on accessories as the future of tablets

Surface blades: Microsoft bets on accessories as the future of tablets

Microsoft's biggest announcement this week wasn't its Surface 2 or Surface Pro 2 tablets, or even what was inside them. It was a surprising Music Cover and the thinner, more impressive second-generation Touch Cover. Instead of rethinking the core concepts behind the Surface itself, Microsoft is getting adventurous with the accessories. For the Music Cover, the company worked with Joe Hahn of Linkin Park to launch a product designed specifically to allow aspiring DJs to remix music through a Surface 2 or Surface Pro 2 tablet. While the cover lights up and offers a number of touch points to control the volume of tracks and individual beats, it feels like it's just the beginning of the possibilities for the future of Touch Cover.

A giant touchscreen, without the screen

Before they were launched, these new Touch Covers, codenamed "blades," were already being thought of as more than just keyboards. Microsoft visited the Art Center College of Design in California to see what 11 students could imagine up for additional Touch Covers. Some thought of solar blades that charge the Surface, others dreamt up credit card readers, and some even suggested Microsoft could build Touch Covers that charge smartphones. Regardless how crazy the concept, Microsoft has gotten people thinking about the future of Surface and its blades concept. The reason? The new Touch Cover 2 now has 1092 sensors on it, up from just 80 on the original Touch Cover. These tiny sensors effectively turn it into a giant touchscreen — just without the screen.

If the concept of two touchscreens side-by-side in a book-like device sounds familiar, it's because it's very similar to what Microsoft was once planning for its notorious Courier device. Courier was aimed at creatives, and Microsoft is pitching its blades concept to the same group of people. While the original Courier concept was scrapped, it could very well live on — all it would take is a second-screen blade. If Microsoft is able to build a fully customizable blade, or even one that you can interact with in less strict ways than the Music Cover, it could be the true answer to the second-screen tablet extension that hardware makers have been experimenting with for years.

"We created it with this concept in mind from day one."

Microsoft didn't say whether it plans to let third parties license the Touch Cover technology or build these additional blades, but it's clearly soliciting feedback. In a Reddit Ask Me Anything, the Surface team claims the blades idea was always planned. "We always dreamed of extending the Surface platform using the blade interface," says an unidentified Surface team member. "We created it with this concept in mind from day one." While there's no news on additional blades, the Surface team hints that more are on the way in the future. Some Reddit members want a special Photoshop blade or an Xbox gaming blade, but the idea has sparked a collective "what if." 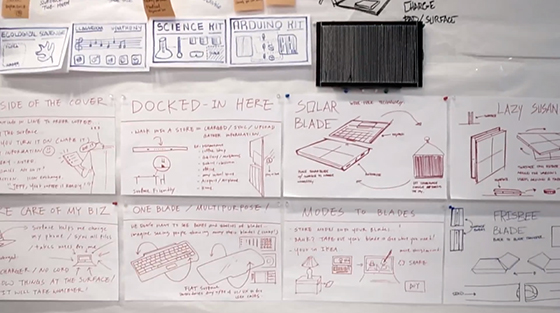 The next natural step for Microsoft is to decide whether there is enough demand to build or create these blades, and whether to allow third parties to do so. If it can build interest in the concept, then it might just attract app and hardware developers to create truly unique ideas for the Surface — ideas that have been somewhat lacking in "Metro" style apps thus far. The Surface 2 and Surface Pro 2 are good incremental hardware upgrades, but even their unique kickstand design isn't enough to fully differentiate them from other PCs and tablets. With the blades, Microsoft could be laying the foundations for some impressive innovation, and specifically innovation that won't be shared with the rest of the Windows hardware ecosystem. It was a quiet launch, but it might just be the most significant change to Surface yet. Now it's up to Microsoft and the creative community to decide the products' future.