Facebook wants to make online shopping just a bit simpler. According to All Things D, Facebook is beginning to roll out a feature that will allow its users to save their credit card and billing information, and then automatically fill that information into apps that they've connected to Facebook. That should simplify the process of buying goods through apps — something that users might like, and that app developers ought to like even more.

A slow rollout for now

Right now, ATD reports that only a small group of users have the feature enabled, and that even then, they'll only be able to use the new "Autofill with Facebook" feature through apps from its two pilot partners, the clothing retailer Jack Threads and the photo printer Mosaic. The service will reportedly scale as Facebook's test continues and as it signs on more retail partners — though, as its name suggests, the feature appears to simply fill information into existing forms rather than wholly taking over a checkout process.

The feature is another play for Facebook to really break into the mobile payments space, and it could be an important one. As Facebook steps up its advertising on mobile, being able to send users into an advertiser's app with their credit card information in tow will be a much more valuable proposition than a standard targeted ad. 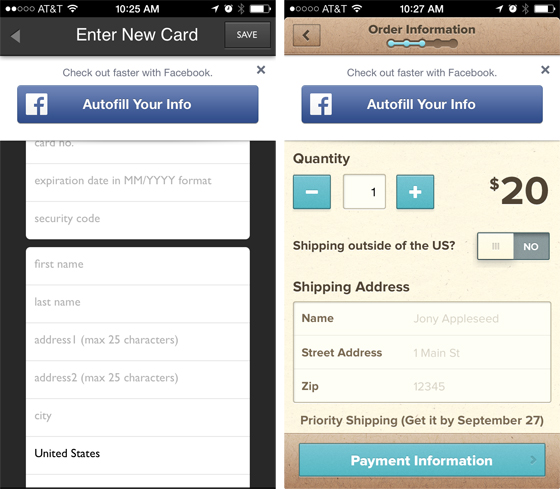 Update: Facebook has confirmed with us that it began publicly testing the "Autofill with Facebook" feature last night, and that it will begin rolling out to some users this week. Facebook also tells us that Facebook Login will not be required for Autofill to pop up, but that users will need to be logged into the Facebook app on their device and have their card already on file with the network in order to see it.