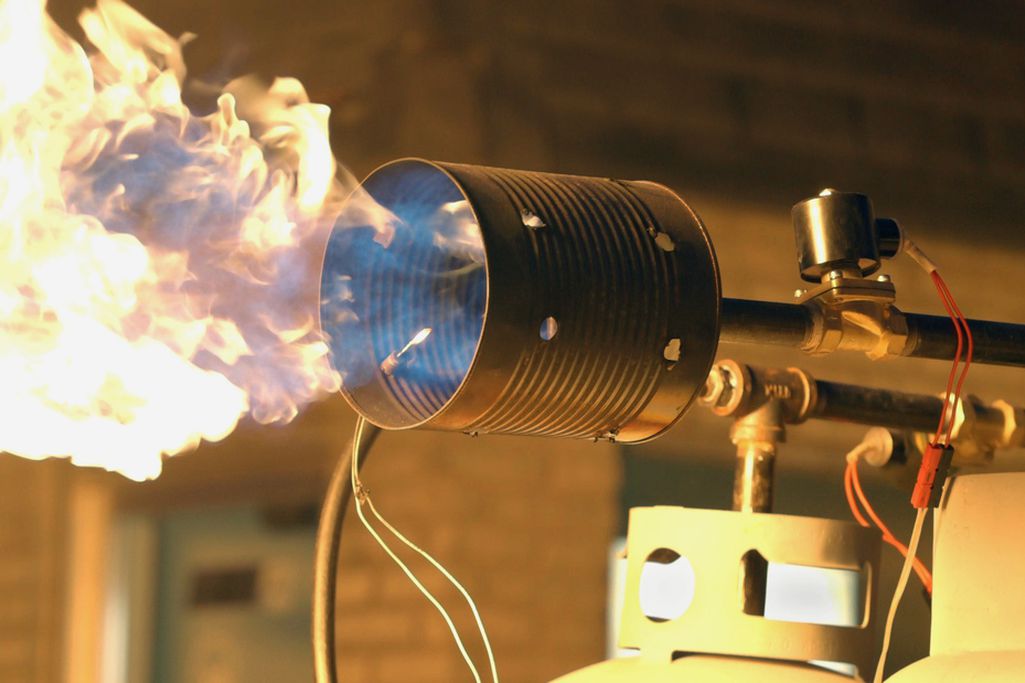 “Wouldn’t it be really cool to have a mind-controlled flamethrower?” ponders Matt Oehrlein. He’s perched on a solid wooden desk, dressed in a T-shirt and shorts, his sneakers crossed at the ankle and swinging in the air. He’s thin and tall, sporting thick-rimmed black glasses and a shock of bushy brown hair. Around him rises what to an outsider looks like functional chaos: a warehouse-like, fluorescent-lit workshop where a traffic light hangs from the ceiling, a forklift idles nearby, and the shrill grind of a table saw cuts through the air.

Naturally, he already does have a mind-controlled flamethrower. It’s a precarious-looking wooden frame about 3 feet tall, topped by a pair of propane tanks. After some required assembly, Oehrlein dons a Bluetooth-enabled headset, steps on a safety switch, and begins to concentrate. Soon enough, satisfyingly whooshing balls of flame illuminate the street.

This is i3 Detroit, a collaborative workspace just north of the city. You can call it a hacker space or a maker space, but fundamentally it’s a community — one made up of people who want to build and learn, using everything from lathes and saws to solder and solenoids to screen printing tools and laser cutters. It’s a nonprofit funded largely through membership dues, with members teaching one another tips and techniques. There’s a lot of teamwork, too, of the sort that produced the mind-controlled flamethrower.

"Do we really need mind-controlled flamethrowers?"

Bringing people together to build cool things while learning about technology is i3’s mission: the three i’s stand for "imagine, innovate, and inspire." That sense of camaraderie attracted Oerhlein when he first visited two years ago. Fresh from graduate school at the University of Minnesota, he was offered a job that required moving to Detroit. "I didn’t know a lot about Detroit," he says, "so a lot of people told me, ‘You’re going to get shot. Detroit’s a scary place. Don’t go there.’" He visited for a week and loved what he saw happening. "i3 Detroit was a big part of why I moved out here," he says. Knowing virtually no one in the area, he threw himself into the space, spending three or four nights a week there. Today he’s the organization’s president. 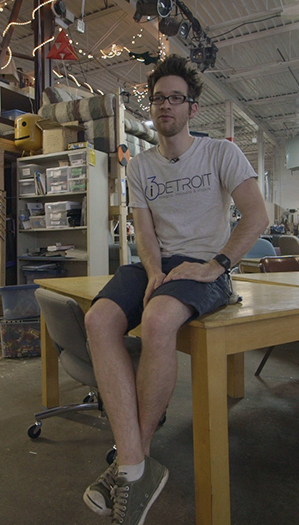 "The hackerspace is one of the reasons I’d never leave here, because it’s such a community," says Jessica Rowland. She’s lived here for five years, spending a couple nights a week at i3; after receiving a design degree from the College of Creative studies in downtown Detroit, she wanted to get away from sitting at a computer to make her art. Like Oehrlein, her first tour convinced her she wanted to join, mainly so she could get her hands on the laser cutter. Now she’s hoping to turn her acrylic lightboxes into a business, though she still appreciates the group’s less practically minded projects. "Obviously, do we really need mind-controlled flamethrowers?" she asks rhetorically. "But it’s really cool."

Of course, similar spaces exist around the world, and the "maker movement" of dedicated DIYers seems almost ready for the mainstream. The area has several such spaces, from Eastern Market’s OmniCorpDetroit to Dearborn’s TechShop, and i3 members believe there’s something special about working in Detroit. After school, Rowland was anxious about "getting off the computer and out into my community." She wanted to build things people could interact with, that might actually be useful. So she took on a local problem: streetlights. With the city’s budget shrinking along with its population, nearly half the street lights lacked electricity or needed repair. With some lemonade containers, PVC pipes, and solar inserts, she created makeshift lighting for the city’s historic highway, Woodward Avenue. "I think in Detroit, especially for the people who are here because we want to be, it’s very much the sense of pulling up your bootstraps," she says. "You work with what you have."

People build things, and i3 Detroit is about reminding them of that fact

"Work with what you have" is a key tenet of the maker ethos, but doing so means knowing what you have. Cool stuff like the mind-controlled flamethrower, as Oehrlein explains, has a nearly universal appeal. Then he can say, "This is really cool; we built it at i3 Detroit. And so can you." A flamethrower, or a laminar flow fountain controlled by dipping your hands into glasses of water, or a Twitter-enabled scrolling sign worn to a Halloween party — these projects might inspire someone to imagine a more creative relationship to his or her environment. "People tend to look at the world differently," Oehrlein says, once they’ve taken something apart and thought about how to make it better, or just different. They’ve been offered a new kind of power to shape their world.

"i3 Detroit gives people a place that lets them have unrestricted creativity," he says. People build things, and i3 Detroit is about reminding them of that fact, giving them a little more power to build the world they want. That’s an important power anywhere, he believes, and maybe a little more so in a place like Detroit, which has seen its share of quick fixes and disposable solutions. Making, in the form of assembly-line manufacturing, long defined the city, and may in some form define its future. But Oehrlein resists making grand claims about the power of DIY to revive a ruined city. He and the members of i3 Detroit are content to make cool stuff, maybe to inspire, and to give people the tools they need to live out that inspiration.