Roku is today refreshing its family of set-top streaming boxes with a modest set of improvements and new features. The Roku 3 remains unchanged as the company's flagship box, but every model beneath it has been refreshed, and in some cases, refined with added functionality. The Roku LT remains the bottom-dollar entry to Roku's vast streaming platform. Priced at $49.99, it's still limited to 720p playback; today's update is little more than a physical redesign, but it's still a safe pick for the grandparents. The Roku 1 is where the significant changes start. The new model finally makes the leap to 1080p video, marking the first time Roku's $59.99 player has supported Full HD content.

But it's easily Roku 2 that's gaining the most out of today's family revamp. The tremendously popular remote with built-in headphone jack — an ingenious accessory that first appeared alongside the Roku 3 — is making its way down to the $79.99 Roku 2. We loved the convenience added by this admittedly simple idea, and we're glad to see Roku spreading it across the line, at least where it's financially viable to do so. Dual-band wireless reception has also been added to Roku 2, which should make your streaming experience more reliable and stutter free. All three updated Roku players are up for pre-order today and will be available from retailers starting in October. Availability of the Roku 3 is also being expanded to Canada, the UK, and Ireland. 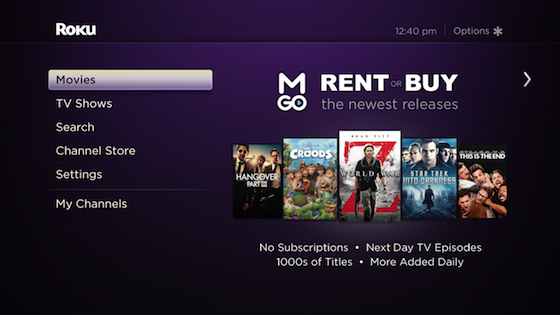 Did Roku just sell out?

Roku also took an unusual (and arguably unfortunate) step today by announcing a new content partnership with Technicolor's M-GO service. Adding a new streaming app to its platform is nothing out of the ordinary, but what makes this deal interesting is that it's the first time Roku is seemingly picking a favorite among third-party services. M-GO is being tightly integrated into the core Roku user experience, and new shortcuts for "movies" and "TV shows" will soon be added to your Roku home screen. These let users instantly purchase selections from M-GO without having to jump into a third-party app like Amazon Instant Video or Walmart's Vudu. The two sides have even worked on an integrated billing solution to cut down on setup time.

You're still free to browse and purchase content from M-GO's competitors of course, but it's being given a distinct advantage with this front and center placement. Roku is going even further to make the process easier by adding an M-GO button to the remotes that ship with today's new boxes. Dedicated buttons for Netflix and Amazon are also included, but at least those are both massively popular services that people actually use. M-GO has largely been a non-player to this point. So it's easy to see how these deals give the impression that Roku is selling out, but the company's set-top boxes remain among the best on the market (assuming the M-GO integration doesn't degrade that experience). For now, it's not the end of the world, but the "My Channels" menu will take a bit more scrolling to get to.