There are riches to be made in the brave new world of virtual currency, but some deals are too good to be true

Back in August, weird ads began appearing for something called the Bitcoin Robot that purported to earn massive profits by making hundreds of small transactions a day in the virtual currency, a version of the lucrative high-frequency trading done on Wall Street. The Bitcoin Robot claimed to have a waiting list of 20,000, even though the promo video through which it debuted has fewer than 500 views. Four days after launch, the Bitcoin Robot advertised that "EVERY Bitcoin Robot User Is In Profit (100% Success Quote) I-N-S-A-N-E!"

The Bitcoin Robot bears all the marks of a scam, down to the obviously fake affiliate reviews posted around the web and the illustrated 1-2-3 steps of "download, install, profit." The original ad even seemed to hint that it all might be vapor: "We here have developed a Bitcoin Robot that earns Bitcoin every day, 7 days of the week, 24 hours per day!" a narrator says. "Or at least we claim to do so, for now."

The Bitcoin Robot is just one of many dubious "get Bitcoin quick" schemes floating around the internet. The currency is getting increasing recognition from governments, starting with the US Treasury Department. But in a funny way, the rise of lowest-common-denominator scams tangibly demonstrates how the virtual currency increasingly resembles a real-world currency.

It sounds like a pyramid scheme, but what if it’s not?

The Bitcoin Foundation, a nonprofit that advocates for Bitcoin in the press and on Capitol Hill, does not attempt to protect users from scams, and director Jon Matonis says he doesn’t know of anyone who monitors for scams in the Bitcoin world.

"In the future, we plan on publishing various best practices guides for both individuals and businesses utilizing Bitcoin, however the customers would have the responsibility of monitoring adherence to ‘best practices,’" Matonis wrote in an email. "‘Consumer beware' as in most parts of life."

But in a world where a well-known pundit can honestly declare "I’m putting all my savings into Bitcoin" and a gambler can earn $1.3 million in a single payout on a Bitcoin betting site, it can be difficult to tell what’s real. The Nigerian prince-level scams that propagate across forums, warning that Bitcoin is about to be "illegalized" and owners should send their Bitcoins to a specific address to protect them, are easy to ignore. But what about GrowCoins.com, which advertises daily profits of between 8 and 10 percent on its investment plans? It sounds like a pyramid scheme, but what if it’s not?

"Crap like this is a dime a dozen in the stock world. It's just moving over to Bitcoin now," says Jeff Garzik, an early Bitcoin developer who works for the payments processor Bitpay. "Even if it's not an outright scam, these systems never make money for anyone except the author." The economy around Bitcoin is now worth around $1.5 billion, an astonishing number for a four-year-old currency with no central authority behind it. However, a lot of that economic action is just speculation. Investors bought and sold $66 million worth of Bitcoin in the last month alone on Mt. Gox, the largest of several Bitcoin exchanges. 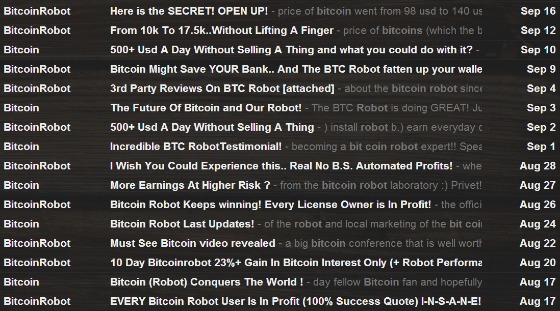 The most legendary Bitcoin profits accrued to early adopters who bought low or at zero and sold high. Since that initial gold rush, speculators have had to get creative. Committed traders who understand the currency could bet directly in dedicated chat rooms, while others who had the programming knowledge could write scripts to arbitrage between the exchanges. Bitcoin can be exchanged for real-world currencies relatively easily, and it has remained volatile — a single Bitcoin was trading for $237 in April and is now going for around $135. That combination makes it very tempting for opportunists looking to flip the currency for an easy profit.

Of course, profit is never guaranteed. One reason why a pitch like Bitcoin Robot sounds bogus is that purchases still take a long time to process. High-frequency trading in the Bitcoin world is on the order of 30 minutes per transaction. "BTC is simply not liquid enough to carry this out profitably over the long term," one expert with knowledge of trading algorithms and Bitcoin, who asked not to be identified because he was speaking without his employer’s approval, said in an email.

"Crap like this is a dime a dozen in the stock world. It's just moving over to Bitcoin now."

Trendon T. Shavers of Texas took in $4.5 million worth of "investment" before his pyramid scheme, Bitcoin Savings & Trust, collapsed in August. The scam, which promised 7 percent returns, was so egregious that even the Bitcoin Foundation publicly condemned it.

The fact that the scam was conducted in Bitcoin did not protect the thief. Shavers was charged with operating a Ponzi scheme by the Securities and Exchange Commission, the first time the government had prosecuted someone for stealing Bitcoins. If Bitcoin scammers continue to bait greedy victims, it probably won’t be the last time the SEC intervenes. However the Bitcoin Robot, which has at different times purported to be based in Austria, Russia, and Hong Kong, may be outside its jurisdiction — either way, caveat emptor.

More from this stream All about Bitcoin: the rise and trials of an anonymous virtual currency