Cutting the cord: Brazil’s bold plan to combat the NSA

Cutting the cord: Brazil’s bold plan to combat the NSA

President Dilma Rousseff wants to route internet traffic away from the US, but experts say it will do little to deter American espionage

Revelations about the American government’s ongoing electronic surveillance have sent shockwaves across the globe, but few countries have reacted as boldly as Brazil, where lawmakers are currently considering a plan to cut ties — quite literally — with the US.

Earlier this month, Brazilian president Dilma Rousseff announced plans to create an undersea fiber-optic cable that would funnel internet traffic between South America and Europe, bypassing the US entirely. Rousseff also urged legislators to pass an amendment that would force Google, Microsoft, and other US web companies to store data for Brazilian users on servers located within Brazil, while the country's postal service has already begun developing an encrypted domestic email system.

The moves come as a direct response to allegations that the National Security Agency (NSA) has been eavesdropping on Rousseff’s phone calls and emails, according to classified documents leaked by whistleblower Edward Snowden. The reports, published earlier this year, have escalated diplomatic tensions between the Obama administration and Rousseff, who yesterday accused the US of violating international law in a scathing speech to the United Nations General Assembly.

Rousseff's proposals rest upon the premise that by routing web traffic away from American soil and keeping data within Brazil, the Brazilian government could more easily control and secure citizens' online information. But experts say the plans would do little to stop the NSA from spying on Brazilian communications, and some worry that they could lead to a more fractured internet.

"Just because you take steps to make it more difficult for the NSA doesn't mean the NSA packs up their stuff and goes home."

"Just because you take steps to make it more difficult for the NSA doesn’t mean the NSA packs up their stuff and goes home," says Christopher Soghoian, principal technologist and senior policy analyst at the American Civil Liberties Union (ACLU).

The majority of internet traffic to Central and South America flows through a single building in Miami, known as the Network Access Point of the Americas. Bypassing that route with a new cable would require years of work and billions of dollars, and likely would have little effect on NSA surveillance, Soghoian says. The US already has a nuclear submarine explicitly dedicated to tapping undersea internet cables, and has proven its ability to hack into the computer networks of foreign governments.

Forcing companies to store data locally would make it easier for Brazilian authorities to access information held by US-owned corporations, but Soghoian warns that it wouldn't make things much harder for the NSA; because both companies are based in the US, American officials could still force Google or Facebook to hand over that data through subpoena or court order, regardless of where their servers are located. Brazil could implement encryption techniques to make it harder for the NSA to access emails, he notes, but the strongest measures could make it difficult for Brazilian authorities to access data, too.

"It's not just about having servers in Brazil, it's about storing data on servers that are not run by US companies," Soghoian tells The Verge. "Unless you're going to make it illegal to use Google, which would be a very high bar, you need to build domestic services that are equally compelling."

"You're asking to lose if you send your data through the US in any way."

Others acknowledge that Brazil's plans may not completely safeguard the country from foreign surveillance, though routing traffic away from the US is still safer than sending it through Miami.

"You're asking to lose if you send your data through the US in any way," says Richard Stallman, founder of the GNU Project and Free Software Foundation. Stallman sees local storage requirements as a positive development, though he suggests Brazil could go further by prohibiting domestic companies and government agencies from remotely storing data on foreign-hosted computers.

"There is no surefire solution against spying, but that doesn't mean it's silly to even try."

Brazilian officials say they have no plans to ban users from accessing US-owned sites, as China and Iran have, and there's no sign that the country wants to wall itself off from the rest of the world. Still, some fear that Brazil's plans to circumvent the US could result in a more fractured landscape that would impinge on the free flow of information. 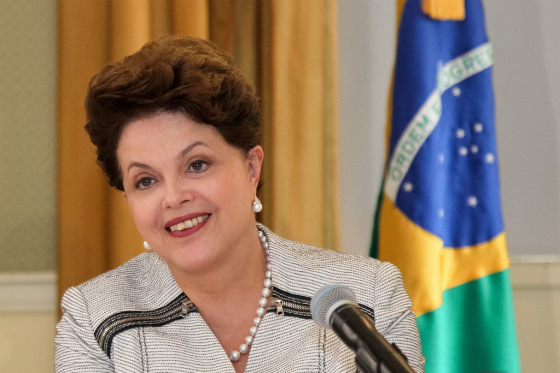 President Rousseff lashed out at the Obama administration in a speech to the UN Tuesday, accusing the NSA of violating international crimes. (Image credit: Flickr)

"The real danger [from] the publicity about [NSA surveillance] is that other countries will begin to put very serious encryption – we use the term 'Balkanization' in general – to essentially split the internet and that the internet's going to be much more country specific," Google executive chairman Eric Schmidt said at an event in New York this month. "That would be a very bad thing, it would really break the way the internet works, and I think that's what I worry about."

"it would really break the way the internet works"

Some leaders have already begun pushing for greater control over domestic networks. Russia, China, and some Middle East countries made headlines at last year’s World Conference on International Telecommunications (WCIT) in Dubai, calling for measures that would give countries greater sovereignty over their own networks. Activists worry that such proposals would make it easier for countries to repress online freedoms, though others see potential for a paradigm shift in Brazil — an emerging economic power that could shift the internet away from its American nucleus.

"This is potentially a major step for Brazil and hopefully more countries will follow," says Geert Lovink, founding director of the Institute of Network Cultures research center in Amsterdam. In Lovink's view, Rousseff's proposals could offer a way to counteract the "dotcom-NGO-libertarian" doctrine that has sought to minimize state influence over the web — to the benefit of Google and other private sector companies.

"From a postcolonial perspective, we need to break open the old boys network consensus that has so far 'governed' the internet," he explained in an email to The Verge.

It's not clear whether Brazil's efforts will encourage similar action from other nations, but her calls to action have been generally well received within Brazil.

"the NSA program harkens back to military dictatorship and the US support that brought the military to power."

"For many on the Brazilian left, the NSA program harkens back to the [1964–1985] military dictatorship and the US support that brought the military to power," says Robert Muggah, research director at the Igarapé Institute, a Rio de Janeiro-based think-tank devoted to security and development. "Meanwhile, on the right, the suggestion that commercial and energy interests were being clandestinely monitored has inflamed economic nationalism."

As Muggah argued in a recent piece for the Globe and Mail, Rousseff's proposals are at least partially rooted in domestic politics. Her approval ratings plummeted after widespread protests broke out in Brazil this summer, and she is currently gearing up for next year's presidential elections.

The NSA controversy has allowed Rousseff to shift the conversation away from Brazil's social unrest, and she's certainly seized upon the opportunity. Last week, Rousseff cancelled an October state dinner with President Obama — the first for a Brazilian president in nearly two decades — saying a state visit cannot occur without a "timely investigation" into the NSA's practices. Last week, she urged Congress to vote on the legislation on domestic data centers — part of a broader "Internet Constitution" that includes a host of other privacy protections — within 45 days, describing it as an emergency measure.

There's an economic component to Brazil's plan, as well. The country has spent years nurturing a domestic information technology sector, protecting homegrown industries with high import tariffs and tax breaks. The policies have dramatically raised prices of smartphones and other electronics in Brazil, though they've also spawned thousands of startups and some major manufacturing plants. Friendly tax policies have lured global companies like Microsoft and Lenovo, while the government's recently launched Startup Brasil program aims to lure foreign entrepreneurs with visas and seed money.

It's not entirely surprising that the country would take a similar approach to the internet. As Bloomberg News reported last week, the NSA controversy may provide a boost to domestic telecom companies in particular, as the Brazilian government has begun working more closely to develop safeguards to protect national networks. The government is also considering a law that would require all Brazil-based phone companies to use domestically manufactured equipment.

Yet there are concerns that Rousseff's political optics may obscure more substantive debates about international surveillance, and that whatever action the country takes may be too weak to effectively ward off American agencies.

"Cancelling a state visit is fine," says Soghoian, the ACLU analyst. "But when your citizens are using unencrypted emails and unencrypted telephone calls, you're not actually doing anything practical to stop the NSA."