Incredible fish fossil is the earliest known creature with a face

Incredible fish fossil is the earliest known creature with a face

It's a face only a paleontologist could love: scientists in China have discovered the ancient fossil of an armored, jawed fish that appears to be the oldest known specimen with the facial characteristics shared by modern vertebrates. More specifically, the bone structures of the fish's cheeks and jaw give it the appearance of what we now recognize as a face.

In a paper published in this week's Nature, researchers at the Chinese Academy of Sciences offer a detailed description of the fossil, estimated to be 419-million-years-old and given the name of Entelognathus primordialis. The impeccably preserved specimen, which was excavated in Southeast China, is a member of the ancient placoderm class of fish. But its bone structure is different from previous placoderm specimens, and from other fish fossils of around the same age: placoderms were thought to have extremely simple jaws made from bone plates, while other specimens were entirely jawless. E. primordialis, however, has a complex bone structure akin to those of modern vertebrates. 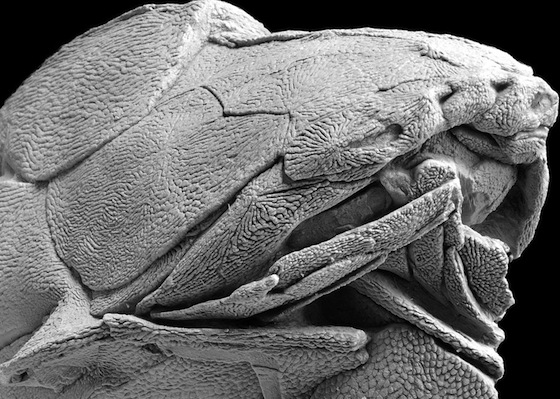 Far from being a mere curiosity, the fossil might actually spur a rethinking of the evolutionary processes that led to today's vertebrate facial structures. That's because the fossil includes characteristics of two groups of fish: ancient placoderms and more modern bony fish, the latter of which were believed to have eventually precipitated land vertebrates like reptiles, birds, and mammals.

A rethinking of evolutionary processes

Until now, experts thought that the two groups were unrelated, and that placoderms had simply died out — but this finding calls that into question. "What a fossil like this shows is that maybe that's not the case," Matt Friedman, a paleobiologist at the University of Oxford, told Smithsonian Magazine's blog. "Because if you look at just the top of the skull and the body, it looks like a placoderm. But when you look at the side, and the front, you see it has jaws that, bone for bone, closely resemble the jaws of bony fish."

In other words, we may not have inherited our jaws from bony fish, but rather from the more ancient placoderms. For now, however, experts aren't quite ready to rewrite evolution: they plan to further investigate the findings before drawing any firm conclusions.