Setting up a new Apple TV just got a whole lot simpler. Users will now be able to set up their entire system just by tapping an iOS 7 device against it — no slow process of scrolling and clicking through menus needed. The process will automatically beam over a user's Wi-Fi network and password, their iTunes Store account, and their language and region preferences to the media streamer. It works by connecting the two devices over Bluetooth, and it's ostensibly one of the first applications that we've seen of what iPhones and iPads are capable of when using Apple's new iBeacon technology, which creates low-power Bluetooth hotspots that perform simple functions, much like what can happen over NFC.

Though the feature was first discovered this July inside of beta software for the Apple TV, it's only now rolled out to most users through the latest Apple TV software update. It only works on the latest generation of Apple TV, however, but it will be able to connect with most iOS devices made in the last several years. 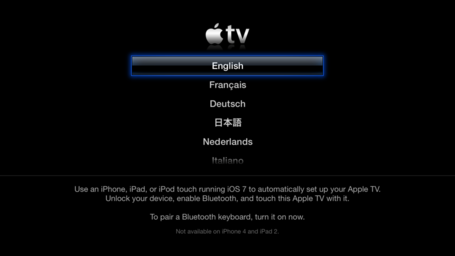 More from this stream Apple's iBeacon: tracking the tech that makes your iPhone a billboard