Latest Pew survey delves into the lives of offline adults

The majority of Americans use the internet with at least some regularity, but according to a new study from the Pew Research Center, there are still many who see no use for it in their everyday life. Pew's survey, released earlier this week, finds that 15 percent of American adults don't use email or the internet at all. Among this offline population, 34 percent say the internet is simply "not relevant" to their lives, while another 32 percent say they find the web too complicated, risky, or cumbersome to use. An additional 19 percent of non-internet users said they couldn't afford to own a computer or connect to the internet.

As with previous Pew studies, internet use varies significantly across demographic groups, and age brackets, in particular. Among Americans aged 65 and older, 44 percent do not use the internet, compared to 17 percent of adults aged 50 to 64. Income and education levels play a role, as well; 41 percent of people without a high school diploma are offline, as are 24 percent of people with a household income under $30,000.

Internet use is the same across urban and suburban areas, where just 14 percent of adults are offline, but slightly more adults (20 percent) go without the internet in rural areas. Rural coverage has been a focus of internet service providers and the Obama administration, which launched a program earlier this year focused on expanding broadband access to schools nationwide and to rural areas, in particular. 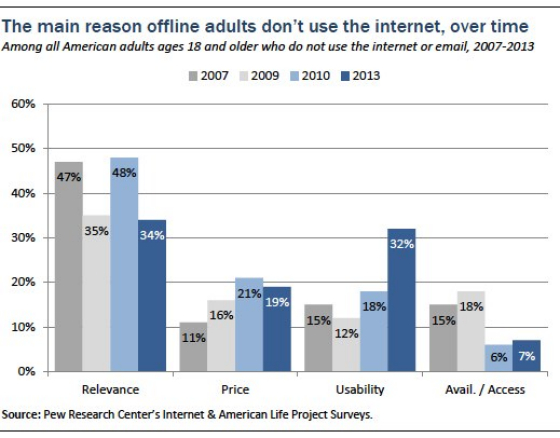 The reasons for which people choose to abstain from the internet have fluctuated over recent years. In 2010, nearly 50 percent of offline adults said the web had no relevance to their lives — far higher than any other reason for not using the internet. This year, nearly the same percentage of respondents cited relevance and usability as primary reasons for staying offline, while slightly less blamed their absence on price levels.

Yet even offline adults admit that the internet plays at least a tangential role in their lives; 44 percent of non-internet users say they've asked a friend or family member to look something up for them online, while 23 percent live in a household where other family members use the web. Overall, 33 percent say they've had at least some exposure to the web, but very few offline adults have a desire to make the internet a part of their lives; 92 percent of those surveyed said they have no interest in going online or using email.