At an event in Menlo Park, Google announced a few new features for its mobile products, including features for its iOS app and redesigns across the board. Tamar Yehoshua, VP of search at Google, demoed some of Google's search features. Yehoshua showed how Google is able to maintain context through multiple searches. She also demonstrated how Google has increased how it's using its "card" design metaphor in more places.

Google's iOS app will soon be updated with push notifications, which can make it work more predictively as it does on Android. You can also look at maps directly with the app and, more interestingly, directly ask Google to save reminders for you, which will pop up at notifications directly within the Search app. The features don't quite bring it up to parity with Google Now on Android — which is of course much more integrated with the core OS — but it does finally bring features to iPhone users that have been lacking.

On Android, you'll get better conversation experiences, Google says, so you can ask follow-up questions without having to repeat the context. The example Google used was initially asking about the Eiffel Tower, then asking more questions about its height and location using pronouns instead of repeating the original query.

On mobile, HTML searches will feature a new redesign, including Google's now ubiquitous cards and details from its Knowledge Graph. Many of Google's new features include giving information directly within search instead of sending you out to another page. Yehoshua showed how you can dig up nutritional information without having to leave its interface — and in fact it can present that information in a comparison chart. 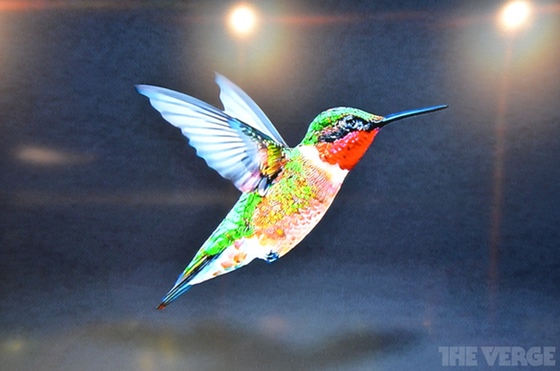 Amit Singhal, SVP of search at Google, announced that the company has a new algorithm called "Hummingbird" that is its biggest update since the "Caffeine" system for ranking search results. In fact, Hummingbird has already rolled out — around a month ago. It affects over 90 percent of searches and apparently does a much better job at handling long, complex questions. Hummingbird gives Google more ability to understand the content and context of the documents it indexes, the company says.

Speaking of better understanding, Knowledge Graph is also getting a bit smarter with new filters and a comparison tool. Asking Google to compare two things in a given category (foods, planets, and dog breeds are cited as examples) will line them up side by side to make the differences clearer than before. 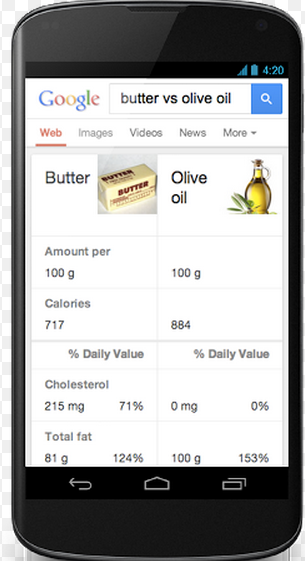