A gamepad designed to work with the entire Steam library

Share All sharing options for: Valve unveils the Steam Controller

Today Valve revealed details for its very own gamepad — the Steam Controller, designed to work with the company's Steam Box console. The device features two circular, clickable trackpads with a touchscreen in the middle. "Driven by the player's thumbs, each one has a high-resolution trackpad as its base," explains Valve.

The company says that the new controller allows for higher fidelity than traditional gamepads, which makes it a better alternative to a mouse and keyboard for controlling PC-centric genres like strategy games and first-person shooters. Valve says that the Steam Controller was designed to work with the entire Steam catalog of games. "We've fooled those older games into thinking they're being played with a keyboard and mouse, but we've designed a gamepad that's nothing like either one of those devices." The controller is virtually the same as the one that will be included as part of the Steam Machines hardware beta, which will be shipping to 300 testers later this year. Valve has been working on the design of the controller for the past year.

The controller features what Valve calls "a new generation of super-precise haptic feedback" thanks to the use of dual linear resonant actuators. "These small, strong, weighted electro-magnets are attached to each of the dual trackpads," says Valve. "They are capable of delivering a wide range of force and vibration, allowing precise control over frequency, amplitude, and direction of movement." They can even be used as speakers. The controller features a total of 16 buttons, half of which Valve says can be accessed without lifting your thumbs. The buttons are also symmetrical, making the controller identical to both left and right handed gamers.

"The Steam Controller was designed from the ground up to be hackable."

In between the trackpads is a touchscreen, which, like the pads, also serves as a button by being clickable. (The beta version of the controller won't include the touchscreen, and unlike the final version it will not be wireless.). It's also designed so that you don't have to keep looking down at your controller — when you touch the screen, it's then overlayed on top of the game on your television. Perhaps unsurprising for a game console built on Linux, the controller itself is also designed as an open device that can be tinkered with. "The Steam Controller was designed from the ground up to be hackable," says Valve. The company says it will make tools available to "enable users to participate in all aspects of the experience, from industrial design to electrical engineering." For developers, the controller API will be made available the same day that units are shipped to beta participants. 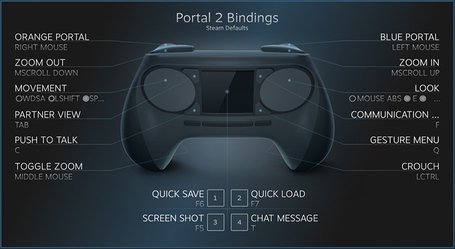 The announcement is the third and final from Valve this week: on Monday the company revealed SteamOS, its Linux-powered operating system, and on Wednesday it detailed a hardware beta program for its console concept dubbed Steam Machines. The controller announcement was teased on Wednesday, with Valve stating that "we have some more to say very soon on the topic of input."

Valve's interest in crafting its own game controller has been known for some time. Earlier this year Valve fired Jeri Ellsworth, the hardware hacker who, among other projects, was working on building a controller for the company's much talked about living room solution. In the past Valve has also experimented with testing biofeedback technologies, which included measuring a player's sweat levels and eye movements — a prototype version of Portal 2 was even developed that could be controlled with your eyes alone.