The terrifying, flesh-eating drug krokodil has reportedly surfaced in the US

The terrifying, flesh-eating drug krokodil has reportedly surfaced in the US

No cases have been confirmed yet, but early reports have authorities on edge

A krokodil user with necrosis of the hand.

When the nasty, highly addictive street drug krokodil appears in a new area, it tends to spread fast. So when doctors at the Banner Good Samaritan Poison and Drug Information Center got two separate reports of suspected krokodil use in the last month — possibly only the second and third cases ever reported in the US — they alerted media, government, and the medical industry.

"We’re taking it very seriously because we’re worried that this drug has finally made it here in some substantial quantity," says Dr. Aaron Skolnik, a toxicologist at Banner. "We would love to be wrong, but whenever we hear about stuff like this, we usually get more."

Krokodil has been called a "moonshine drug," because addicts often cook it at home using codeine pills and household chemicals like lighter fluid and iodine. It’s more addictive than heroin, cheaper than prescription painkillers, and gets you 10 times as high as morphine — but for half as long.

It's more addictive than heroin, cheaper than painkillers, and gets you 10 times as high as morphine

Worse, the cooking process for Krokodil tends to leave traces of toxic substances and even heavy metals in the final product, which addicts inject into their arms, legs, and groin. Prolonged or even short-term use can damage the blood vessels, muscle, thyroid, cartilage, and bone. Because it is taken intravenously, krokodil can cause serious infections in the heart, brain, spine, or lungs. It can also lead to brain damage, organ failure, and necrosis, where skin becomes green and scaly and rots away at the injection site.

Pictures and videos of krokodil users in Russia show blackened fingertips, large open wounds, and even exposed bone where skin has fallen off, as well as the scaly, crocodile-like skin effect that gives the drug its name. Extensive amputation is frequently the only way to save a patient’s life. According to media reports, the mean survival time for a krokodil addict is two years.

The mean survival time for a krokodil addict is two years

Krokodil became popular in the slums of Siberia despite its devastating effects because it is intense, affordable, and easily synthesized. The drug was first discovered in Russia in 2003. In 2011, Vice introduced the rest of the world to the phenomenon in a documentary, "Krokodil Tears," which showed how heroin addiction drove impoverished addicts along the Kazakh border to cook their own krokodil from ingredients available at ordinary pharmacies.

The recipe for krokodil varies, but the psychoactive ingredient is an opioid called desomorphine that was developed at the National Institute of Health in the 1930s as a morphine alternative. It was quickly set aside because of its addictive qualities and limited duration. "Desomorphine is the most powerful painkiller known, but it is very short-acting," wrote The Science News Letter in 1951.

This is the basic preparation (emphasis ours) according to a paper written by researchers in Germany at the University Medical Center of Mainz and University Hospital of Ulm in the journal Substance Use and Abuse entitled "Krokodil" — Revival of an Old Drug with New Problems":

Typically, 5 to 10 tablets containing codeine (costs approximately 300 rubles, equivalent to 9 USD) are boiled with a diluting agent (mostly paint thinner that may contain lead, zinc, ferric or ferrous agents, and antimony) and lighter fuel (gasoline), hydrochloric acid, iodine, and red phosphorous (as a phosphate source), which is being scraped from the striking pads of matchboxes.

"It's NOT pure and it's NOT clean. It IS strong and very cheap indeed. It's also VERY addictive. You will end up shooting it every 3-4 hours and good luck when you run out," one user wrote on Opiophile, a forum about opiate use.

If this basic story — the emergence of a horrifying, dirty street drug with extreme effects — sounds familiar, that’s because we’ve heard it before. About two years ago, there was a rash of reports of "bath salts," a class of synthetic designer drugs that use new compounds to mimic the effects of amphetamines. The drugs are extremely addictive, hard on users’ bodies, and can bring on psychosis. The Drug Enforcement Administration had to exercise its emergency powers to declare bath salts illegal, because the compounds weren’t on its list of controlled substances.

Krokodil, by comparison, is a downer instead of an upper. But it belongs to the same class of synthetic "designer drugs" that are new, but chemically and effectively similar to known drugs. The DEA also isn’t sure how to categorize krokodil, although it is a derivative of the controlled substance codeine. 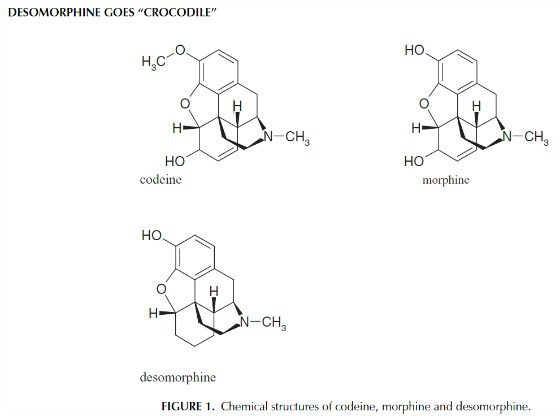 The chemical structure of desomorphine. Source: "Desomorphine Goes Crocodile," published in The Journal of Addictive Diseases.

"These synthetic drugs … these emerging drugs, these emerging trends that we see, this is the new frontier for drugs and drug enforcement," says DEA spokesperson Rusty Payne. "It’s going to be a challenge if this takes off in the US."

The worry isn’t so much that American users will make the drug at home, but that it will be sold on the streets as a low-cost alternative to heroin. Designer drug ingredients often come from China, according to the DEA, which means they’re cheap. Recipes spread around easily on the internet through forums, where drug users share knowledge.

The DEA has been monitoring for signs of krokodil since 2011. That’s when Russian police confiscated 65 million doses of krokodil and finally banned over the counter sales of codeine. Since then, reports of krokodil have popped up in the Ukraine, Germany, and Norway. Krokodil reportedly showed up in Memphis at the end of 2011, Payne says, but the agency hadn’t seen any signs of it after that case — until now.

"This is the new frontier for drugs and drug enforcement."

The Memphis case may have been an isolated incident or another drug being marketed as krokodil. But since announcing the initial two reports this week, Banner has received two more calls from doctors reporting what appears to be krokodil use. The substance must be verified with a urine or blood test in order to confirm that it is desomorphine, but all the symptoms are consistent. Banner declined to name the doctors or where they are located, but the center is working with them to treat the patients and also confirm that desomorphine is involved.

The scare could be an early warning sign that krokodil has hit the American market, but there’s not much evidence that the US is about to descend into krokodil addiction. Four suspected cases does not an epidemic make, and a search of the online drug marketplace Silk Road showed no mentions of krokodil and only one mention of desomorphine, as a possible use for codeine pills that were for sale. Either way, it reminds us that synthetic designer drugs are still on the rise.