A UN panel of climate change experts today announced that mankind is almost certainly to blame for global warming, warning that the planet will see increasingly extreme weather events unless governments take strong action. In a much anticipated report released Friday, the Intergovernmental Panel on Climate Change (IPCC) said it is "extremely likely" that most global warming is manmade, asserting its claims with 95 percent certainty.

"It is extremely likely that more than half of the observed increase in global average surface temperature from 1951 to 2010 was caused by the anthropogenic increase in greenhouse gas concentrations and other anthropogenic forcings together," the report reads. "The best estimate of the human-induced contribution to warming is similar to the observed warming over this period."

In a press conference held in Stockholm on Friday, Michel Jarraud, secretary general of the World Meteorological Organization, said the last decade was the warmest on record, attributing much of this increase to the burning of fossil fuels. Global temperatures are likely to rise by 2 degrees Celsius by the end of this century, the panel added, calling for major reductions in greenhouse gas emissions in order to contain global warming over the coming years.

"Warming of the climate system is unequivocal."

"Warming of the climate system is unequivocal, and since the 1950s, many of the observed changes are unprecedented over decades to millennia," the IPCC said. "The atmosphere and ocean have warmed, the amounts of snow and ice have diminished, sea level has risen, and the concentrations of greenhouse gases have increased."

Concentrations of climate changing gases carbon dioxide, methane, and nitrous oxide have increased to levels not seen over the previous 800,000 years, the report says, with carbon dioxide concentrations increasing by 40 percent since the pre-industrial era. This has led to increased temperatures and rising sea levels, and the IPCC expects Arctic sea ice cover to decrease over the coming century. Mitigating these changes, the panel says, will require "substantial and sustained reductions of greenhouse gas emissions." Given current trajectories, extreme weather events are likely to become more common and severe.

"Heat waves are very likely to occur more frequently and last longer," Thomas Stocker, co-chair of the IPCC working group, told reporters. "As the earth warms, we expect to see currently wet regions receiving more rainfall, and dry regions receiving less, although there will be exceptions."

The IPCC acknowledged that there has been a so-called "hiatus" in rising temperatures over the past 15 years, but said there is not sufficient data to explain this slowdown in warming rates. Stocker said evidence shows there is a "large amount of natural variability" in global temperatures, adding that a 15-year window is too narrow to extract significant conclusions.

"Each of the last three decades has been warmer at the earth's surface than any preceding decade since 1850."

Still, over the longer term, it is clear that the planet is warming at dramatic rates. "Each of the last three decades has been successively warmer at the earth's surface than any preceding decade since 1850," IPCC chairman Rajendar Pachauri told reporters, referring to 1850 as a benchmark for the beginning of the Industrial Revolution.

The UN has agreed to create a plan to combat climate change by 2015. 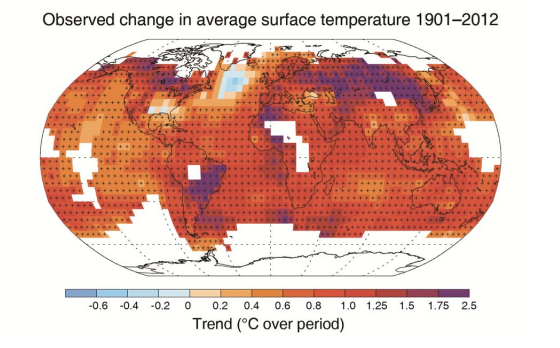 The 36-page summary released today is the first part of the IPCC's Fifth Assessment Report. A full report will be released on Monday, followed by three additional reports over the next year. The report, compiled by 259 scientists from 39 countries, does not include any original research, but bases its conclusion on a review of existing literature.

Comprised of 195 member nations, the IPCC is widely seen as an authoritative voice on climate change, with governments looking to its reports to guide policymaking decisions. But the panel has come under increased criticism in recent years, with climate change skeptics charging that the IPCC exaggerates its claims to make global warming seem more extreme than it is, and others claiming that the panel waters down its findings. Its last report, published in 2007, included an exaggerated claim about melting glaciers in the Himalayas, though later studies found that the mistake did not impact the panel's larger findings.

"The failure to take substantial action on climate change shouldn't be blamed on the IPCC."

"The IPCC's role is to review complex science and synthesize it for a broader audience," says Josh Galperin, associate director of the Yale Center for Environmental Law and Policy. "Because climate science and policy have become such hot topics, it is natural for the preeminent international body to attract attention."

Such attention can bring pros and cons, Galperin explained in an email to The Verge, acknowledging that some criticism is warranted. "Having only one preeminent voice for any complex scientific and policy endeavor can cramp a more productive dialogue."

But Galperin says it's important to note that when it comes to actual policymaking, the IPCC plays a relatively limited role.

Pachauri, the IPCC chairman, stopped short of prescribing specific policy changes, but he stressed that greenhouse gas emissions must be drastically reduced to meet climate targets in the future.

"Our job is to carry out an assessment of the science," Pachauri told reporters. "What impact that has on the public and any actions that are taken by governments or society at large is really not for us to comment on."

"But... there is a need for us to reduce emissions of greenhouse gases substantially if we really want to stabilize the earth's climate. And I hope this is a message that the world will receive and accept."