In February of 2013, programmer Nick Poulden got hooked on the idea of giving up food. He’d found the blog of Rob Rhinehart, a creator of a meal substitute called Soylent. Meant to provide a full dose of calories and nutrients in a single, cheap powder, Soylent was positioned as not just a better kind of protein powder or an Ensure substitute, but a revolution. "Free your body," proclaims the site’s crowdfunding page. "What if you never had to worry about food again?" Some tossed around the notion that Soylent could solve world hunger, optimistically overlooking decades of work on malnutrition-fighting food like Plumpy’nut and complex socioeconomic problems that can foil the most sophisticated plans. Early versions of Soylent left out vital ingredients like sulfur and iron, and nutritionists have warned there’s little evidence Rhinehart’s current formula is nearly as complete as he claims.

Those claims, however, remain enticing. Rhinehart says he’s lived off Soylent for months, and others have tried shorter experiments with favorable results. Soylent attracts relentless optimizers, people who want to sustain themselves without having to track calories and plan or cook meals. And at least in theory, they can do so on a budget of about $5 a day — not exactly as dirt-cheap as Plumpy’nut paste, but less than similar FDA-approved medical foods.

"I guess I just love the idea of a default food."

Poulden says the possibility intrigued him from the start. "I guess I just love the idea of a default food, a food that's minimal effort," he says. "The number of times that I'll go home after work and know that I have nothing in the fridge, and the idea of going grocery shopping and standing in line for an hour. I'm not the kind of person that plans out every meal in a week." While he'd still cook and eat out periodically, Soylent would become the base of his diet. But as Rhinehart kept working on his crowdfunded formula, it became clear that Soylent wasn’t coming out anytime soon. Instead of waiting, Poulden began a project to make his own — and to give like-minded tinkerers a place to meet.

Last week, Poulden’s efforts were given Rhinehart’s blessing, as his site Make Soylent became DIY Soylent, a subsection of the official product site. With a nutrition calculator and spreadsheet system, DIY Soylent lets hobbyists see how well a given recipe meets the dietary recommendations for their body type. A rudimentary forking tool lets people build off each other’s recipes much like GitHub lets programmers build on each other’s code, and Poulden is working on improving a review system. Above all, though, it’s a central repository. DIY Soylent currently hosts 446 recipes, with names ranging from "Simple Soylent" to "ARZ Dark Nutritional Sorcery."

Poulden wasn't the first to make his own Soylent, and so far, he admits he's not a master of the trade. An early effort to reverse-engineer the powder left him with a couple hundred dollars in sunk costs and an inedible product. "I drank a few sips, and I was like 'I couldn't drink this every day,’" he says. "It tasted pretty bad, to be honest." That’s part of why he started Make Soylent: if enough people share and try recipes, the best ones will naturally rise to the top. 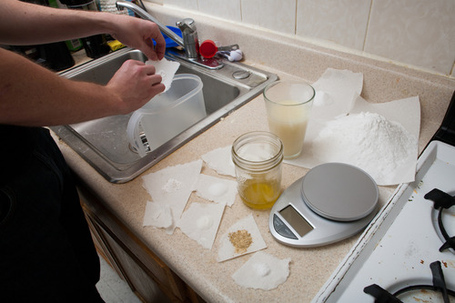 If the DIY Soylent library is any indication, one of those successes is Zach Alexander’s Hackerschool Soylent, which has inspired dozens of variations. Where Poulden describes himself as somewhat lackadaisical about food, Alexander is a former professional cook who recently spent two years managing meals at a Quaker boarding house in Boston. It was there that he heard from friends who were attempting to make a single, nutritionally complete meal. "I thought it sounded pretty ridiculous at the time," he says. "Not that I thought it was a ridiculous idea, but I thought it wouldn't work." Not long after, he found Rhinehart’s blog and realized that the project wasn’t simply speculative — his friends were trying to make their own version of the existing Soylent powder.

Initially, Alexander hoped to join their project. But after moving to San Francisco — away from anybody who would split the cost of "50-pound sacks of maltodextrin" — he decided to take a different tack. Instead of the highly technical recipe he’d been planning, he started looking for something that could be made mostly out of ingredients from a grocery store. Alexander describes the resulting cocoa-infused mix of soy protein, oat flour, olive oil, and other ingredients as tasting something like a chocolate granola bar. Since publishing it in June, he estimates he uses it for about 85 percent of his meals.

Why would a man who’s been cooking since college decide to largely give up real food? Alexander says it’s not because he’s given up on gourmet meals — quite the opposite. He compares cooking to an art form that we’re required to consume three times a day. "A lot of people would think: I really love movies, I really love to see live music, but it would get old three times a day every day. And that's honestly how I feel about food," he says. "When I'm going to eat actual food, I would prefer it be food that I'm actually excited about."

"When I'm going to eat actual food, I would prefer it be food that I'm actually excited about."

The grandiose speculation about ending world hunger aside, that’s more or less the central selling point of Soylent: it’s something cheap you can eat when you’re just not that interested in food. But ironically, with commercial Soylent perhaps months away, only the most dedicated enthusiasts can realize those low costs and convenience. Even if a recipe is only a couple of dollars a day in the long term, the ingredients can cost hundreds, with uncertain payout — sure, you don’t have to be excited about eating Soylent, but you have to be able to at least stomach it. Alexander estimates his Hackerschool Soylent costs $1.50 per meal, but the initial outlay is between $75 and $200.

The DIY Soylent community has signed up between 600 and 800 users since mid-summer, and Poulden says he sees one or two people a day buy ingredients through an Amazon referral link. Even a generous estimate isn’t anywhere near the 10,000 or more who contributed to Soylent’s crowdfunding effort. "I know a few people who've actually ordered [Soylent]," says Poulden. "But going the DIY route and doing that level of research? I think it's a hobbyist thing." And at the moment, the catalog is confusing and full of "junk recipes," including a "simple and cheap base diet" made of nothing but whole milk.

Some recipes are painstakingly crafted; another is made entirely of whole milk

Both Poulden and Alexander say they’re considering the possibility of switching over to official Soylent when it’s released, but they don’t think the DIY community will necessarily die off as a result. Alexander in particular sees Soylent as a movement, not a brand. "The specifications on all these [recipes] are in theory the same," he says. "But there's a million ways that you can meet this criteria." Some people might want low-carb Soylent, others may have dietary restrictions or want something made from real food rather than bags of vitamins. "Rob's style of doing it is pretty chemically oriented, and I don't say that as a bad thing, I'm very pro-science," says Alexander. "But I realize that's not for everybody. So the fact that there's a larger community movement means there's room for people to do it from all different kinds of ingredients." He’s currently working on a recipe made of "whole foods" like sunflower seeds.

If Soylent is a success, Poulden thinks it’s not just going to be hobbyists getting in on the game. In a slightly tongue-in-cheek survey on the site, he asks visitors whether Soylent will start appearing in vending machines or get its own section in grocery stores. Make enough money on anything, he thinks, and big brands are going to take notice. "I think at that point, people will start to catch on," he says. "It's not like this hasn't been attempted before. There's stuff like Ensure, and things that are aimed at people who are on hunger strikes. But nobody's ever tried to make something that's cheap." We’re a long way from seeing Soylent alongside produce and pasta — if we ever do — but for now, Poulden’s simple site can at least give the Soylent-hungry masses a kind of cookbook.