The rise of the surprisingly beautiful Snapchat art movement

Share All sharing options for: The rise of the surprisingly beautiful Snapchat art movement

Snapchat is designed to be ephemeral — that's why it purposefully destroys your messages seconds after they're received. Recently, however, some users have been saving their snaps and circulating them on the web. Why? Because they're masterpieces.

There's James McKenna, whose sardonic depictions of subway commuters as characters like "punk rock dad" and "Asian angel of the Q train" earned him the title of "Snapchat king" from BuzzFeed. There's Lukas E. Zirngibl, also known as the Snapchat Artist, a 21-year-old Dartmouth student who draws celebrity portraits and recreates famous paintings like "Girl with the Pearl Earring," all on an iPhone 4. There's the mysterious Abel, friend of Nerdist writer Becca Gleason, who does not post his snaps online but draws such impressive, comic-booklike scenes that Gleason felt compelled to save and publish them. 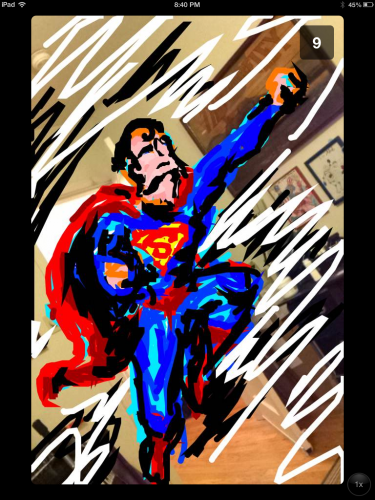 A snap by Abel, the mysterious artist-friend of Nerdist writer Becca Gleason.

Like Instagram prints and Twitter poetry, Snapchat is the latest social network to accidentally produce a new genre of art. The app's rudimentary drawing tool isn't built for serious work; it allows users to doodle over a photo or video in basic colors, a cute gimmick that lets you draw a mustache on your boss or send a selfie of yourself wearing a party hat on your birthday. But now even the popular Facebook page "Snapchat's Funniest Screenshots" is starting to include some artful snaps among the sex jokes and pictures of cats. 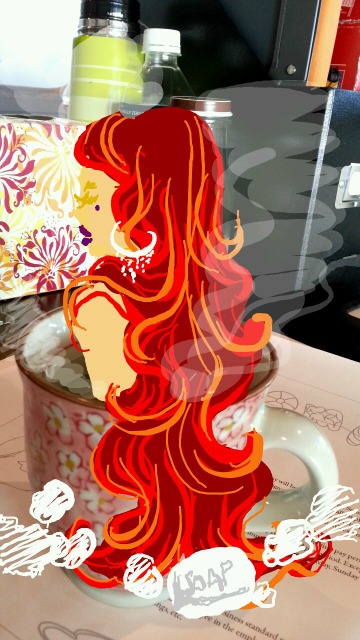 A snap by Chiayi Lin, a designer who actually works for the company.

"Yes, it certainly does seem rather counterintuitive to be making ephemeral artwork," Zirngibl wrote in an email. "But, I don't think of it that way. Each of my pieces (all drawn on my iPhone 4 in Snapchat) are sent out to all of my Snapchat friends. Unlike an oil painting or charcoal drawing, the life/existence of the piece is determined solely by my friends. If they choose to screenshot it, the artwork lives on. If not, the artwork is forever gone. Every time I send one out, it is exciting to see if the piece will survive and make its way back to me."

It may seem ironic that an app originally conceived of for sexting is now inspiring intricate paintings and social commentary, but the idea of using constraints to boost creativity is not new. "The more art is controlled, limited, worked over, the more it is free," composer Igor Stravinsky wrote in his book about writing music. The same goes for app art, apparently.