Is technology scrambling my baby's brain?

Our collective obsession can both hurt and help

Share All sharing options for: Is technology scrambling my baby's brain?

I reached the breaking point, as many parents do, about two and a half months in. My newborn son, Oliver, was hitting a phase where his five senses were really coming online. The mere act of being awake was often overstimulating; sometimes he would start to cry when we turned on a bright light or closed a door too loudly.

It was late afternoon and he was sitting in my lap wailing. I rocked him, fed him, and changed his diaper, but nothing helped. In desperation I did something that until that point I had resisted: I grabbed my iPhone and opened up the Comics app. As soon as I started flipping through panels of the Wolverine saga, the crying stopped. His little mouth gaped open in wonder. I took his hand and swiped it across the screen. A new image appeared. He smiled in delight.

My mother came in from the kitchen. "What are you showing him?" she asked with horror. "Don't you know how bad that is for his brain?"

"It's not that serious, Mom," I countered, waving her off. "A little bit of time playing with my phone isn't hurting him."

My wife, overhearing us, joined in the conversation from the next room. "You're going to turn him into a vegetable," she shouted.

"You're both nuts," I fumed, but I put the phone back in my pocket. Oliver burst into tears. 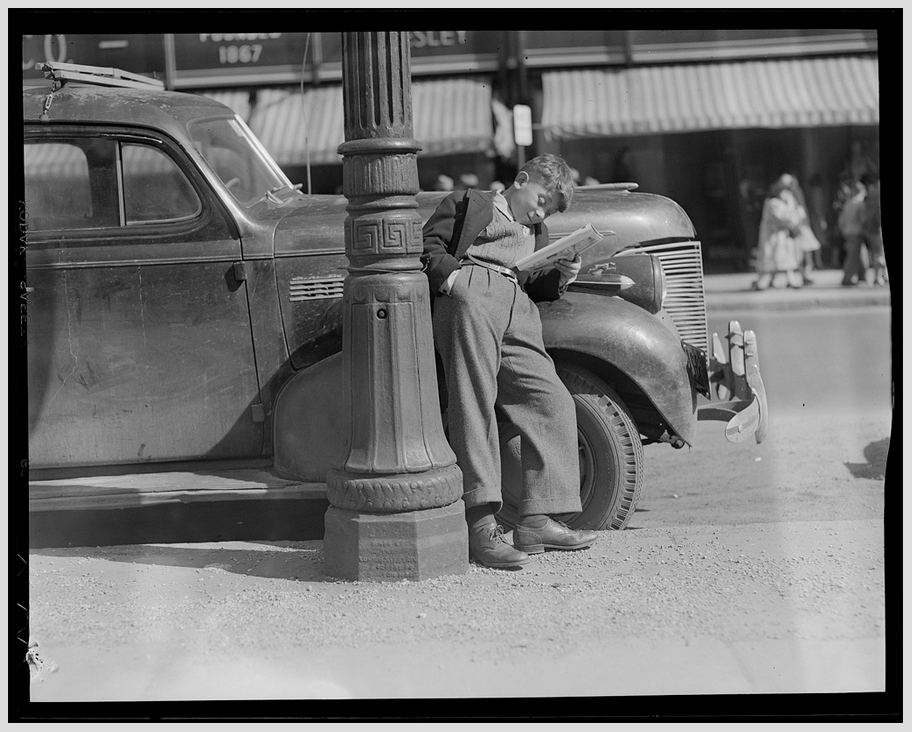 Every new narrative technology has been demonized upon arrival by those convinced it’s harming their children. In 1835, the American Annals of Education declared that the “perpetual reading” of novels “inevitably operates to exclude thought, and in the youthful mind to stint the opening mental faculties, by favoring unequal development. No one can have time for reflection, who reads at this rapid rate.”

Radio was so addictive, parents warned, that children were skipping meals to tune in, and film transformed viewers into sexually deviant criminals. Television was a mental wasteland. Video games created violent killers. As for comic books, Dr. Fredric Wertham wrote in 1948:

My mother's suspicion of screens was just knee-jerk nostalgia 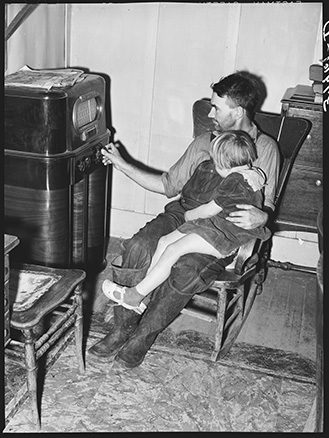 “Badly drawn, badly written, and badly printed — a strain on the young eyes and young nervous systems — the effects of these pulp-paper nightmares is that of a violent stimulant ... Unless we want a coming generation even more ferocious than the present one, parents and teachers throughout America must band together to break the comic magazine.”

I viewed my mother’s suspicion of screens as just another form of the knee-jerk nostalgia that makes people believe new gadgets are addictive, dangerous, and capable of affecting not just how we think, but the way our bodies work. A few days after the iPhone incident, however, I got an email from my mother with links to a half-dozen scientific studies about the effect television, computers, and video games can have on young children’s developing brains. Too much screen time can, according to the various studies, lead to a delay in verbal skills, poor concentration, emotional instability, and a greater risk of developing attention deficit disorder. In 2011, the venerable American Academy of Pediatrics officially decreed that exposure to screens is detrimental to children under the age of two. Some of the most damning data my mother passed along came from the Millennium Cohort Study, which tracked the long-term health and development of children in the UK born between 2000 and 2002. It found that by the age of five, children who spent more than three hours a day in front of a screen were more likely to engage in antisocial behaviors such as fighting and stealing than their peers. I wasn’t just stunting my son’s intellectual potential, it seemed. I was turning him into a dangerous hooligan.

"Too much time with these screens can lead to impaired focus."

“I have a lot of concerns about the impact of technology on young children,” says Dr. Gary Small, a professor at the Semel Institute for Neuroscience and Human Behavior and the author of iBrain. “Too much time with these screens can lead to impaired focus and social skills later in life.” The new wave of smartphones and tablets, says Small, are far more compelling to infants than television. “When we put kids in a room with an iPad, they will choose that over other toys. They will often choose it over their own mothers.”

As much as it pained me, this was objective evidence I just couldn’t ignore. I’m the kind of guy who falls asleep reading Twitter. At least once a month I get so caught up in an iPhone game I miss my subway stop. My love of the digital world has led me to a great career, but now it seemed my status as a tech-obsessed dad was hurting my son. When I bounced him on my lap and surfed the web, was that like second-hand smoke for his fragile young brain? 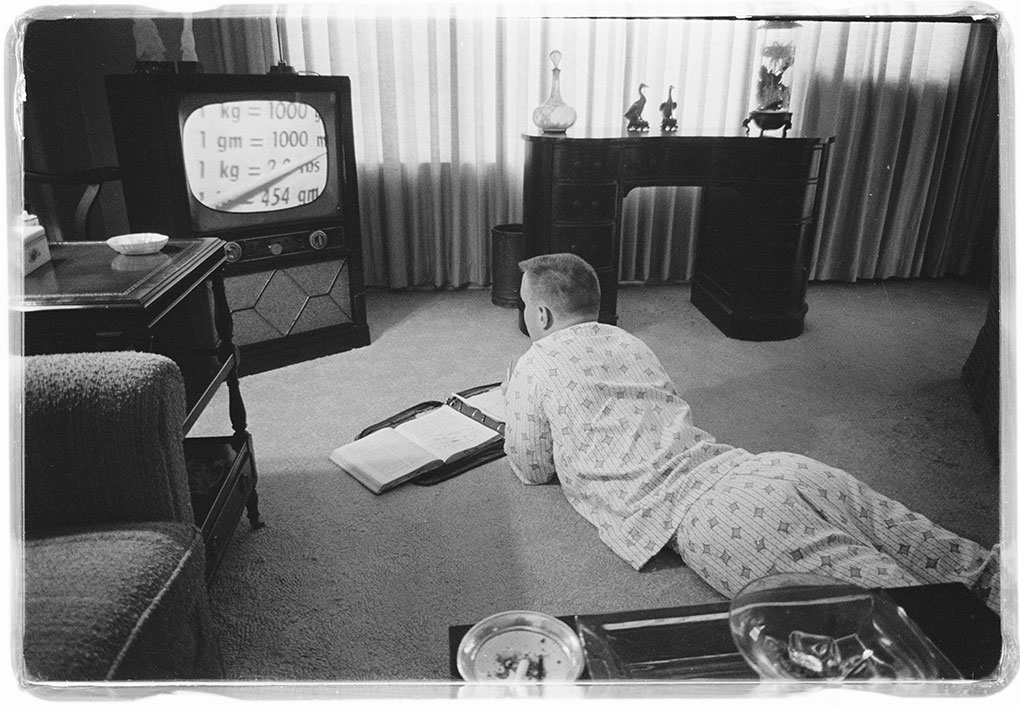 During the first two years of a baby’s life, its brain triples in weight, marking a period of explosive growth that will never be matched again in its life. Those early years are a crucial time for mental development, setting the foundation for adulthood. Synapses, the connections between neurons in the brain, explode in number. We’re born with about 2,500 synapses per neuron, but by age three we’ll have around 15,000. From that point the number of neural connections actually begins to decrease. This explains, for example, why children are capable of learning complex language skills that intelligent adults find difficult to master later in life.

For me, that’s an argument in favor of giving my son access to technology at an early age. If the paradigm for his budding mind is swiping through apps and playing interactive games, he will be geared to build great digital tools. Why would I emphasize spending time with books when they will likely be dusty artifacts by the time he’s a teenager, relics of another age like the telegraph and the typewriter?

If Oliver wants to be a figure skater or toll booth operator, I’ll support him. But as a parent with the privilege of pushing him in what I think is the right direction, I take Douglas Rushkoff’s motto to heart: program or be programmed. Learning to love technology, to build and to code, are the best skills I can give to prepare him for a bright future.

What matters is the difference between passive and active consumption

Searching for a way to justify this rationale, I called Dr. Dimitri Christakis, director of the Center for Child Health, Behavior and Development at Seattle Children's Research Institute. “Screens are purely a delivery mechanism. What parents should be focused on is the content,” he told me. A blanket ban on screens, he argued, doesn’t make sense. “I’m a member of the American Academy of Pediatrics, but I have to say, their statement about the effects of electronic media is clearly out of date.”

What matters, says Christakis, is the difference between passive and active consumption. In a study he conducted, two groups of kids played with blocks and watched TV. The group who spent their time engaged in active play scored significantly better on subsequent language acquisition tests. Christakis is now replicating this study comparing the effect of television to interactive iPad games. The research isn’t finished yet, but Christakis says, “I suspect the effect of the iPad on the brain will be much closer to the blocks than the TV.”

Heather Kirkorian, an assistant professor in developmental psychology at the University of Wisconsin, came to a similar conclusion. She taught two groups of children new words: one group just watched a video, the other had to touch a screen to produce an outcome. “For kids under 30 months old, they learned more when there was an interactive component. And so I think that shows the potential touchscreen devices might have as educational tools, especially when compared to television.” 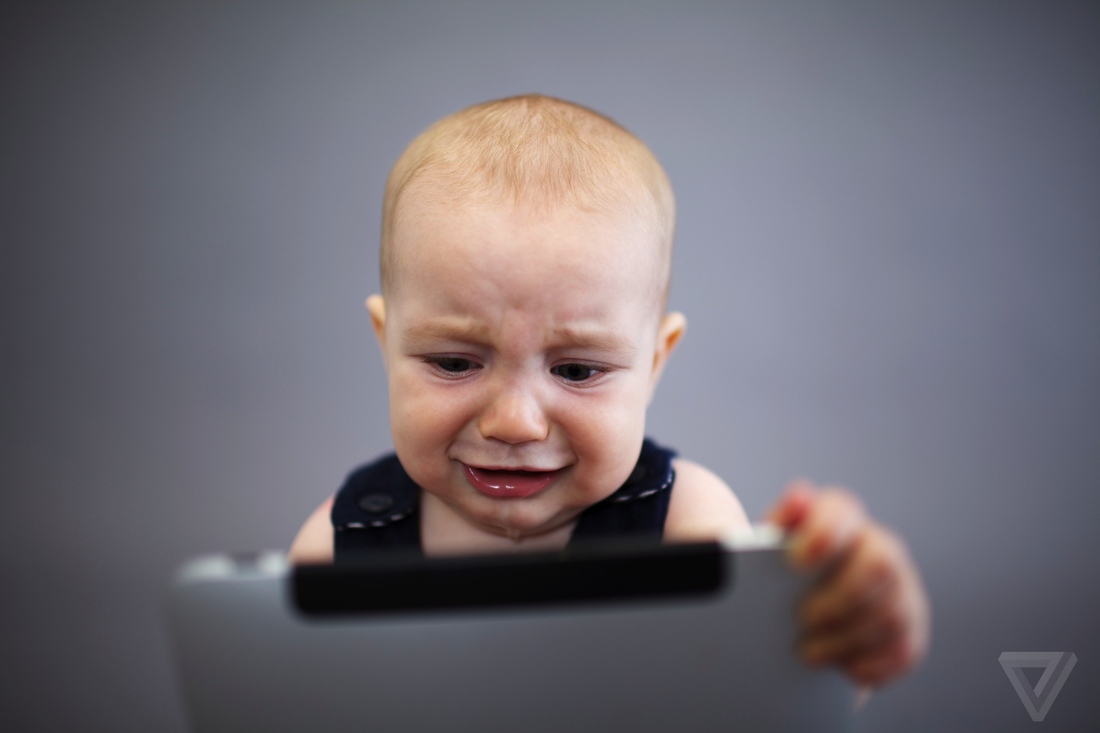 My wife and I took Oliver on his first trip outside the country recently, a train ride to a wedding in Canada. It was a scenic journey; first we rushed past the Hudson River on our left, then Lake Champlain on our right. But it was also a long day, 11 hours on the rails, and when he got bored my son started to screech. My wife held him up to the window so he could take in the epic countryside rolling by, but he was not impressed. He tried to lick the window. Oliver strained for the screen when I fired up a game of Anomaly Korea on my iPad. “Don’t you think we should be teaching him to appreciate the beauty of nature?” my wife asked. Feeling guilty, I closed my game and redirected Oliver back to staring out the window.

A family at the dinner table, each focused on their own personal screen, is the epitome of the idea of being “alone together.” But an iPad game seems like something my son and I could learn to love together. And some experts agree. “If you’re there to guide them, today’s interactive devices can be a great way to learn and to bond,” says Michael Levine, executive director of the Joan Ganz Cooney Center at Sesame Workshop. Rather than making arbitrary limits on screen time, says Levine, parents should make sure kids’ experience with technology is shared. 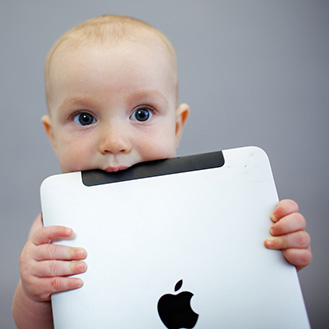 Levine says he can relate to my desire to inculcate my son with my love of today’s technology. “For Dustin Hoffman in The Graduate, the future was ‘plastics.’ I tell my kids, think digital and global. There is a certain kind of modern literacy that you are trying to introduce.”

In some ways, says Levine, keeping kids away from screens completely for the first few years of their life will set pretty unrealistic expectations about their exposure to technology. “Let’s not be Pollyanna here. We are looking at wearable technology becoming the norm within a couple of years.”

That wedding weekend was spent in a campground an hour outside Montreal where there was no cell service or Wi-Fi. For the first day I compulsively checked my phone, just in case some stray signal happened to poke through the clouds enough to let me refresh my Twitter feed. But eventually I gave up trying. Oliver loved walking around the lake, so we did laps through the forest, stopping to watch a flock of geese feeding near the banks.

Sometime during that trip, I realized it was silly to worry Oliver wouldn’t become a digital native unless I force-fed him a tech-heavy diet from day one: that idea was just as foolish as the notion that brief exposure to gadgets and screens was somehow toxic for his brain. As long as we balanced the different aspects of his life, encouraged his passions and tempered his addictions, things would sort themselves out.

And besides, whatever technology I’m preparing or protecting him from today will likely seem as outdated to a teenage Oliver as my collection of rap CDs. “The world of digital media is transforming so rapidly, it’s very hard for researchers to keep up with the effects on children,” says Daniel Anderson, a professor of psychology at the University of Massachusetts who studies childhood development and media. “TV today is, fundamentally, the same as TV 40 years ago, but the way we engage with computers today is very different from 20, even 10 years ago.” In raising his own son, Anderson had ideas for how much television he should watch, but no clue about how to respond to the social networks that ended up becoming his son’s obsession. “I expect those changes to keep accelerating,” Anderson says. “We’re beyond the event horizon, so to speak.”