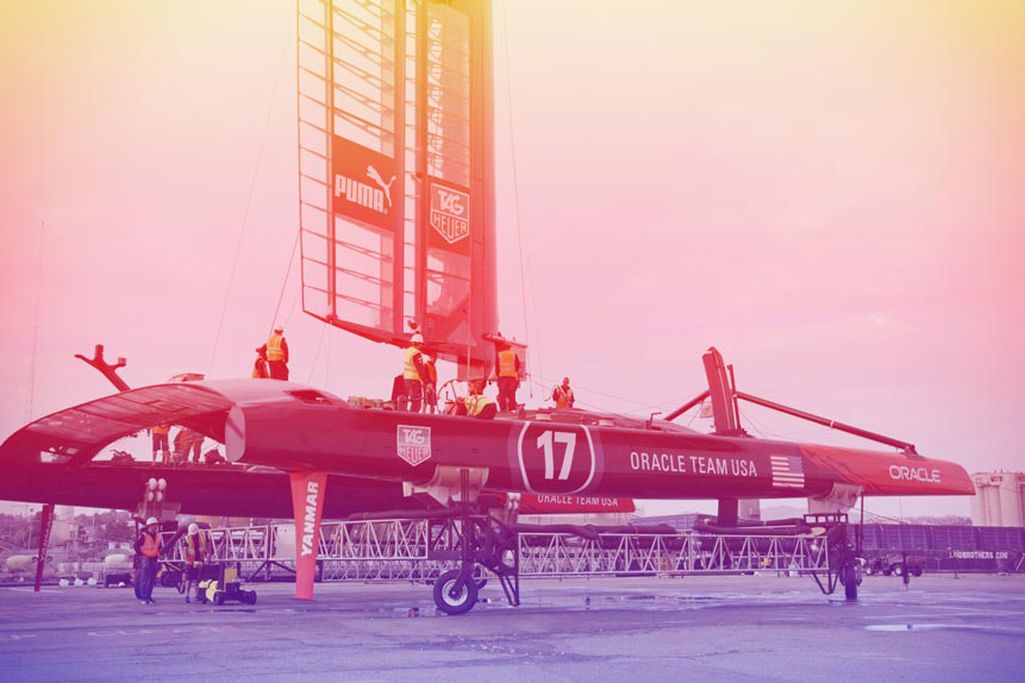 The finals of the 34th America's Cup are days away, but they will take place in the long shadow cast by the events of May 9th. On that morning, sailing in the high winds of the San Francisco Bay, an enormous catamaran capsized while making a turn. The 72-foot boat, which can sail faster than the wind, splintered into pieces as its towering sail hit the water. Andrew Simpson, a 36-year-old sailor aboard Sweden's Artemis Racing AC72, was trapped underneath the boat for 10 minutes. When medical crews reached him, he could not be revived.

The finals of this year's America's Cup begin September 7th. Defending champion Oracle Team USA, led by billionaire Oracle founder Larry Ellison, will take on Emirates Team New Zealand. The teams have spent more than $100 million apiece, employing hundreds of people, to build the fastest sailboats the race has ever seen. But Simpson's death, which came seven months after the dramatic capsizing of an Oracle sailboat, dredged up the question that has dogged the AC72 ever since it was announced as the official yacht class for the race. Is it too fast to be safe?

From Top Shelf: flying boats, and a death race for the America's Cup

At a relatively lightweight 13,000 pounds, with a sail that stretches 131 feet into the air, the AC72 is built for speed. "The goal was to make and design an exciting boat — something that looks like a fast and amazing machine," says Joseph Ozanne, who helped design the AC72 for Oracle. In 2007, America's Cup yachts had an average top speed of around 10 knots, or 11.5 mph. This year, the average is closer to 40 knots — about 46 mph.

Designers built the hulls for the 2013 competition out of a custom carbon fiber that makes the yachts stronger while still keeping them light. The power-to-weight ratio is 10 times higher in the AC72 than it was in the 2007 yachts, says Ian "Fresh" Burns, director of performance for Oracle. "Imagine taking your Camaro, and taking the 300-horsepower motor out and putting a 3,000-horsepower motor in the same car," Burns says. "That’s what these guys do every day."

At 43 knots, the catamaran can sail its entire 72-foot length in a single second — nearly four times faster than the 2007 class. The massive sail generates 7 tons of force, lifting the hull out of the water until the boat’s only connection to the water is a thin hydrofoil known as a daggerboard. Sailors on the Oracle crew say the experience of being on an AC72 as it flies up out of the water is exhilarating. "When you are racing, you are not worried about the safety," says Gilberto Nobili, a sailor for Oracle Team USA. Nobili says he feels about sailing the AC72 the way he did about skiing as a child — he focuses on the speed, and the sensation of flying, while putting any concerns out of his mind.

"These sailors, they’re adrenaline junkies," says Julian Guthrie, author of The Billionaire and the Mechanic, which chronicles Ellison's quest to win the America's Cup. "And they want it to be safe, but they want to get to the finish line the fastest. That’s the objective."

The chief adrenaline junkie is Ellison, who took a strong interest in sailing in the 1990s and mounted two unsuccessful America’s Cup campaigns before winning in 2010. Ellison has said he is drawn to sailing because it symbolizes freedom and self-reliance. To nobody’s surprise, he has proven to be as ruthless a competitor in the water as he has in business. "Someone once asked me if it’s worth $100 million to win the America’s Cup," Ellison says in the recent documentary The Wind Gods. "It’s certainly not worth $100 million to lose the America’s Cup." At a panel discussion on the film this spring, Ellison was even more direct, according to a report by All Things D: "The biggest lie told in professional sports is, ‘We’re just going out there to have fun.’"

In the aftermath of Simpson's death, amid international criticism, organizers of the event announced they would make changes to the race in an effort to make it safer. Among other things, they lowered the top wind-speed limit at which they would cancel a race. 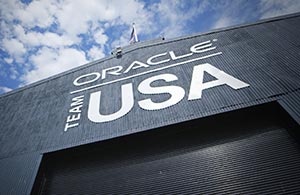 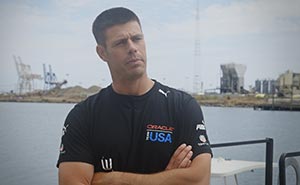 That hasn't stopped some critics from calling on America's Cup organizers to abandon plans to sail the AC72. C.W. Nevius, a columnist for the San Francisco Chronicle who has covered this year's races extensively, says the giant boats and windy bay have proven to be a terrible combination. "They've got too much boat for too much weather, and they're breaking," Nevius says. "They overreached with the boats, and refused to make any adjustments. It's killing the competition — and it's killing a 160-year-old tradition."

Safety isn't the only reason critics wish organizers would have chosen another boat class. (Nevius favors the AC45, a smaller catamaran that competitors sailed during earlier parts of this year’s America’s Cup competition.) The high cost of building the AC72 kept many other countries from competing in this year's America's Cup: a single yacht costs $8 million to $10 million, and most teams build two in case one is destroyed in the competition. As a result, an expected field of fifteen teams turned out to be a paltry four.

Meanwhile, earlier this month, Oracle Team USA was found to have been using illegal weights on board in an apparent effort to help control the unwieldy yacht. The head of the racing syndicate said Oracle's management was unaware of the weights — a statement considered plausible by approximately no one — and Oracle might have to forfeit some of its races as a result. (The finals consist of a best-of-17 series; Oracle would begin the finals at a disadvantage against the other team to make it.) 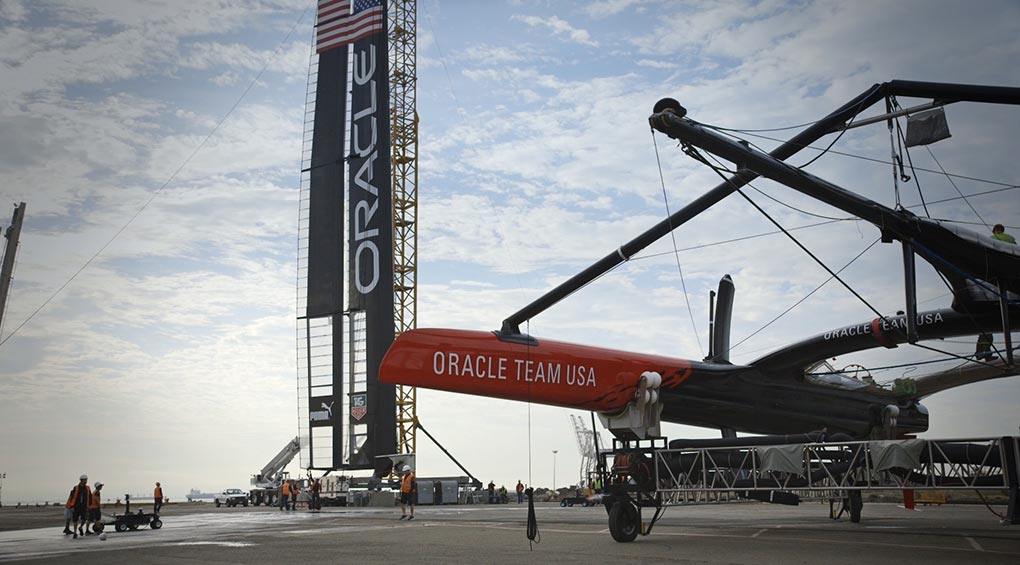 While the AC72's safety record has drawn criticism, it has also drawn attention from the US media that the America's Cup often struggles with. NBC will televise the finals, becoming the first US network to broadcast the event in 20 years. According to Guthrie, the element of danger played a strong role in attracting the network's attention. "It’s getting faster and more dangerous, and that attracted the major networks," she says. "People going back to the Romans, they’re bloodthirsty. Why do you watch football? You want to see the pileups. You want to see these crashes."

"Of course," she adds, "you don’t want tragedies."

Burns says that several fail-safes are built into the AC72, helping to minimize the danger to its 11-man crew. Sensors onboard analyze 30,000 pieces of data every second, and can alert the crew to sudden changes in the environment that could put them at risk of capsizing. Also worth noting: America's Cup has had just five fatalities in its history, a safety record that compares favorably to professional auto racing.

Still, Burns acknowledges that the crew takes real risks every time they suit up. "The reality is that there’s a lot of danger in these boats, and going that fast on the water is pretty dangerous no matter what you’re on," he says. "Put that together with the ferocity of a race, and taking a few chances, probably more than you would ordinarily — it makes it dangerous. But on the other hand it also makes it incredibly thrilling. Just having these boats sail past you at 40 knots, or 50 mph, it’s a freakish and awesome experience even for someone doing it as long as I have."

And as fast as the boats are today, the crew of Oracle Team USA says research and development continues. When the 2013 race is over, it won't be long before preparations begin for the next America's Cup. Speed, as always, will be at the top of everyone's minds. "I still have a lot to improve and learn," says Orzonne, the Oracle designer, "and I'm sure the boats of the future will be even faster than this one."