Lenovo's new ThinkPads may still have their little TrackPoint nubs and their round-bottom keys, but the company's made some big changes to its lineup of black box laptops. The company's new ThinkPads are lighter, sleeker, longer-lasting, and they're not even technically black anymore — they're "Graphite Black." It's a big change for the famously change-resistant line of black box laptops, but from what we've seen the changes seem to be for the better.

The lower-end ThinkPad T-series is getting two new 14-inch ultrabook models: the T440 and the T440s. These new notebooks are lighter and thinner than their predecessors, and come with the much larger trackpad that we first saw in the T431s and the ThinkPad Helix. They're virtually identical in build quality, but the T440s is considerably higher-end: it comes with up a Core i7 processor and has a built-in 1080p touchscreen, whereas the T440 has options for only a Core i5 and you'll pay extra for the touchscreen.The T440 is also $899 instead of $1,149 for the T440s, so it'll be up to businesses to decide how important resolution and touch are.

All of Lenovo's new ThinkPads include the company's new Power Bridge technology, which uses both an internal and a removable battery to let you swap batteries without having to shut your computer down. These batteries are one-size-fits-all, too, so they're interchangeable between all the new ThinkPad notebooks. Between Power Bridge and Lenovo's adoption of Haswell chips, battery life probably won't be an issue for ThinkPad users anymore. 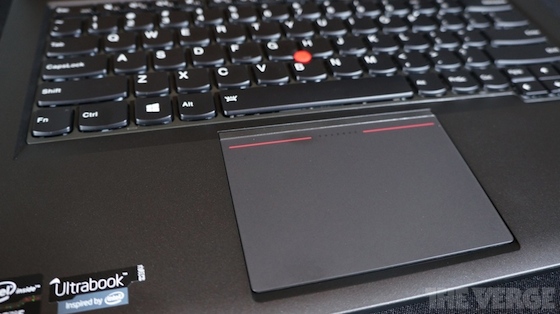 For the hardest-core of its road warrior users, Lenovo also introduced the new 12.5-inch ThinkPad X240. Like the T440, touch is optional on its 1080p display, but this smaller notebook still supports up to 4th generation Intel Core i7 processors — and Lenovo promises up to 17 hours of battery life on all its new models even without the crazy Power Bridge tech. It's one of the thinnest and lightest ThinkPad ultrabooks Lenovo's ever made, though at about three pounds at 0.8 inches thick it's not exactly class-leading. You're spending $1,099 for everything else a ThinkPad offers, from ports to security to that great keyboard, and the slimmer build is just a nice byproduct.

Battery life is the key feature of the new ThinkPads

Somewhere in the middle of its lineup sit the new S440 and S540, which pack a bit more power than the T-series. Both are touch-enabled, and support up to 4th generation Intel Core i7 CPUs and discrete graphics. Both the 14-inch S440 and the 15-inch S540 are aimed at Europe and Asia and are priced €699 and €649, respectively.

Lenovo's on a relentless modernizing streak, and has been one of the best and most successful Windows 8 PC manufacturers over the last year. We're still waiting for the company to combine the flexibility of the Yoga with the design of the X1 Carbon, but even without that the new ThinkPads are a nice step in the right direction for the company's business laptops.